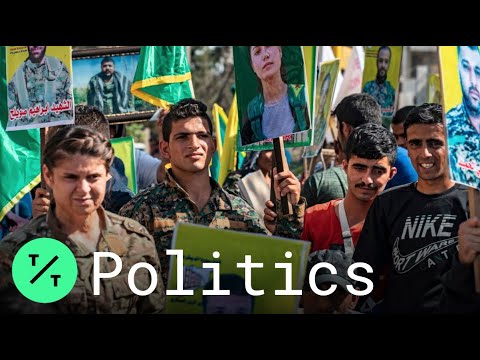 Ann Arbor (Informed Comment) – Tessa Fox at Al Jazeera writes that Trump’s abrupt withdrawal of U.S. special operations forces from northern Syria in expectation of a Turkish invasion could throw the Syrian Democratic Forces (SDF) militia cultivated for the past four years by the US into confusion. Moreover, Bashar al-Assad’s Syrian Arab Army may make a bid to take the gas and oil fields of Deir al-Zor province, currently under SDF control. (SDF’s major and only really important component is the People’s Protection Units (YPG) of the Kurdish paramilitary.) As a result of all this turmoil, the some 12,000 ISIL terrorists now locked up in containment camps could well escape. Many of them are from abroad and might make their way back home to plot further terror.

These alarums are being raised virtually everywhere except in the White House and in Turkish President Tayyip Erdogan’s presidential palaces.

Although for the moment, Trump just pulled out the 50 US troops up near the Syrian border with Turkey, and the US apparently still has about 1,000 military personnel in the Kurdish region of Syria, Trump says he wants to bring them all out. Doing so without any plan whatsoever for the aftermath is typical of Trump but could turn into a disaster.

The British are alarmed, and are saying that they will have to withdraw their several hundred special operations forces from northeast Syria if the US gets out, since they depend on America for logistics, transport, rescue operations, etc. Trump’s departure, in other words, will create a reverse snowball effect where the anti-terror coalition will shrink to nothing without the American commitment.

The Kurdistan Regional Government expressed the profoundest fears that if 12,000 ISIL fighters got loose, they would also threaten the security of Iraq, not just Syria. Until the liberation of Mosul on 21 July 2017, the KRG was daily threatened by ISIL violence. I had a friend who was in Kurdistan then and would go down to the border and could actually see the black flags flying menacingly.

For his part, Erdogan says that his government is studying the best ways to ensure that jailed ISIL operatives do not escape.

This statement is not reassuring, since it is way past the time to study and prepare for this issue on the part of Turkey, if it is planning to invade Syria. Arabi21 quotes Turkish analyst Oktay Yilmaz saying that the Americans had used this ISIL business as a pretext to go into Syria and then to give away a third of Syria to a terrorist organization. This sort of “analysis” is common in Turkey, where many government officials and journalists just can’t seem to see ISIL as the enemy even as they vastly exaggerate the danger to Turkey of some 2 million Syrian Kurdish post-socialists (who have not actually committed any terrorism). I mean, I think what ISIL did to Paris or Brussels or Kabul or Mosul might somehow have gotten on TV news in Turkey.

So the likelihood that ISIL will be any sort of priority for the Turkish government is extremely low, and I wouldn’t bet on those ISIL terrorists remaining in their cells.