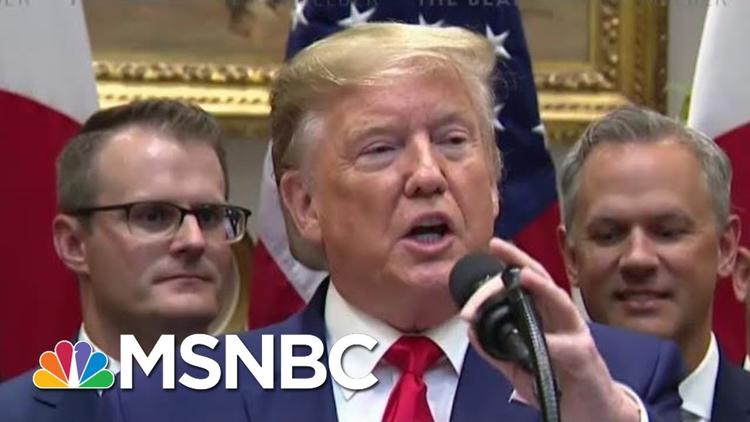 ( Foreign Policy in Focus) – Trump is counting on his base to endorse his increasingly open law-breaking. It may not end well.

Trump’s public appeal to China last week to help with uncovering dirt on the Biden family was both a brazen flouting of the law and (it pains me to say) an astute political tactic.

“China should start an investigation into the Bidens, because what happened in China is just about as bad as what happened with Ukraine,” Trump announced to reporters only moments after saying, about trade talks with Beijing, that “if they don’t do what we want, we have tremendous power.”

Trump’s move coincides with two other critical revelations in the impeachment scandal.

The first is the release of texts that provide the proverbial smoking gun: the Trump administration was indeed promising a quid pro quo of a White House visit and/or the unfreezing of military aid for Ukraine’s assistance in digging up dirt on Joe Biden and his son Hunter. Then came the announcement of a second whistleblower with direct knowledge of the phone call between Trump and Ukrainian President Volodymyr Zelensky.

Taken together — the appeal to China, the damning text messages, the second whistleblower — these developments add up to what I’d previously written was missing: a slam dunk in the impeachment of the president. He broke the law. He has tried to cover up the breaking of the law. He continues to break the law — and is defying the constitution by refusing to cooperate with Congress on its investigations.

But Trump, the Republican Party, and their captive media occupy a different reality, where the president is up against a vast conspiracy of corrupt officials, do-nothing Democrats, and biased mainstream journalists. This part of their story is obvious: it’s reiterated over and over in Trump’s tweets, Republican talking points, and Rush Limbaugh rants.

What’s not so obvious is that this conspiracy extends to the rule of law. According to this skewed version of reality, corruption has penetrated the bedrock institutions of American society: the political sphere, the intelligence agencies, the mainstream media. Corruption has transformed the very fabric of politics, culture, and law.

To root out corruption, then, it’s necessary to step outside the rule of law. Donald Trump hasn’t declared a state of emergency. But he is acting as if he has (which, in case you’re wondering, is illegal). His decision not to cooperate with congressional inquiries, including the most recent impeachment inquiry, is also part of this unstated state of emergency.

Trump has tipped over the political chessboard because he believes that it’s warped. He is continuing to play nonetheless, but on his own board, with his own pieces, and according to his own rules.

What makes Trump’s move so fiendishly clever is that his paranoid style of governance has a grain of truth to it. The chessboard is warped.

A rule of law that permits a vice president’s son to benefit so blatantly from his father’s position, maintains a revolving door that transforms “corruption” into business as usual, and creates a state patronage system (the military-industrial complex) of astonishing size and influence is something of a contradiction in terms.

The rules are determined by law — except when they’re determined by power. American politicians have long traded on their government connections with foreign leaders for private gain. That they did so only after leaving office, in accordance with the dictates of the rule of law, only gives the corruption a veneer of respectability.

Trump, of course, doesn’t even respect this veneer. His violations of the emoluments clause of the U.S. constitution indicate that he is so impatient to use his office for personal gain that he isn’t waiting to leave the White House to start his influence-peddling. Trump’s chessboard, in other words, is even more warped than the conventional one.

The astute reader might ask how Trump can simultaneously challenge and benefit from the corruptions of the status quo. You could have asked the same question of Nicolae Ceausescu, the leader of Romania, who purported to lead an egalitarian workers’ state but lived in unbelievable opulence. Leaders who operate according to unstated states of emergency can get away with such contradictions through outright repression or extraordinary lies. Trump, so far, has relied on the latter.

Such a state doesn’t last forever. On December 21, 1989, Ceausescu was giving what he believed to be a routine speech in Bucharest. This time, however, behind the first row of supporters, the crowd began to boo. The look on the leader’s face when he understood what was happening was priceless. It was his last public appearance. The next day, he and his wife fled the city by helicopter. They didn’t get far. They were tried and executed on Christmas Day.

At what point will Trump have his Ceausescu moment, when he realizes that the base he’d always counted on has turned its back on him?

Donald Trump has alleged that Hunter Biden made $1.5 billion in payoffs from Chinese businesses. As with pretty much everything that comes out Trump’s mouth, this allegation is false. Biden’s son served in an unpaid capacity on the board of a U.S.-China joint venture, BHR Partners. In October 2017, Hunter Biden invested somewhere around $420,000 to acquire a 10 percent stake in the company and reportedly hasn’t received any compensation from his involvement in BHR.

There was no kickback. There was no collusion (Joe Biden wasn’t in government in October 2017). So, it’s a non-story.

But again, it’s a non-story according to the finer points of the law. Let’s face it: Biden’s son was following in the time-honored tradition of trading on his political influence. Indeed, it’s what Ivanka Trump, Jared Kushner, and Kushner’s sister Nicole Meyer all have done with China as well – receiving most-favored-person status from the country after paterfamilias Donald Trump had already taken office.

In other words, the public is primed to believe that if you lie down with the Chinese, you wake up with pay-offs. To quote only the most salient example, Henry Kissinger, who helped negotiate détente with Beijing in the 1970s, went on to make

Even if Hunter Biden wasn’t making out like a bandit in China, there’s the huge monthly salary he was pulling down as a board member of the Ukrainian energy company. As David von Drehle points out in The Washington Post, “sober working people making $50,000 a year may be skeptical of a system in which a vice president’s addicted son reportedly collected that sum every month.” It’s not corruption by the conventional definition, but it’s unseemly.

Corruption: that’s the word that Trump is trumpeting, over and over. It’s a tricky strategy. Trump knows corruption when he sees it because, well, he’s soaking in it. But as long as his base continues to view him as an anti-corruption fighter, a drainer of the swamp instead of a denizen of it, the president will continue to hold his party captive and fend off impeachment charges.

Perhaps, however, Trump has overreached this time. The latest polling suggests that nearly 20 percent of registered Republicans now want the House to vote to remove the president from office.

Meanwhile, Trump is upsetting his party in other ways.

The phone calls that Trump has with foreign leaders read like something out of an absurdist play: Trump Ubu.

He congratulates Vladimir Putin on his election victory even though his advisors pleaded with him beforehand not to. He promises to help Saudi Arabia join the Group of Seven. He praises Rodrigo Duterte’s murderous drug policy. In his quest for a Nobel Peace Prize, he tries to enlist the help of Japan’s Shinzo Abe. He drones on about chocolate cake with China’s Xi Jinping.

But his most recent phone conversation with Turkish leader Recep Tayyip Erdogan has generated some bipartisan criticism — and all because Trump is defying the Pentagon and trying to pull U.S. troops out of Syria. “It is time for us to get out of these ridiculous Endless Wars, many of them tribal, and bring our soldiers home,” Trump tweeted.

The problem is that Trump is also giving Turkey a green light to strike against the Kurds in northern Syria. Trump’s critics, including those in the Republican Party, are worried that the Islamic State will re-emerge and the abandonment of a steadfast Kurdish ally will make others around the world think twice about siding with a fickle United States. Trump’s close pal in the Senate, Lindsey Graham (R-SC), called the president’s move “a disaster in the making.”

It’s not clear if Trump will actually go ahead with this plan any more than he followed through on his earlier declaration of a U.S. withdrawal from Syria. But all it takes is one phony phone call for Republicans to realize that the commander-in-chief does whatever he wants without any consideration of the party’s stated goals.

The Republican Party is not going to get bent out of shape about Trump breaking the law. Or Trump’s involvement in corruption. Or even his obstruction of justice. He has been engaged in these activities since day one. Republicans will continue to blather on about how his peccadillos don’t rise to the level of the “high crimes” required for impeachment.

But the president, in his “great and unmatched wisdom,” may yet piss off his party on some other foreign policy issue. He might, for instance, make a deal with Kim Jong Un, Vladimir Putin, or some other disreputable rival autocrat that the Republicans just can’t stomach. Perhaps he’ll impulsively pull the United States out of NATO. Or maybe he’ll start savaging a critical mass of Republican lawmakers out of sheer pique.

Then Republicans will be forced to acknowledge that Trump’s unstated state of emergency is an authentic emergency that requires — for the sake of the Constitution, democracy, and rule of law — the removal of the perpetrator. They won’t do so out of principle. They will do so only out of expediency: to save their party and their own skins in the next elections and maybe the courtroom as well.

That’s when Trump will appear in front of the crowds to give a speech — perhaps during the impeachment process, perhaps at the height of the 2020 election campaign — and hear nothing but crickets from Graham, Fox News, and his previously rock-solid base. Maybe there will be even some boos. That’s when Trump will have his Ceausescu moment. And that will be the last moment of his inglorious political career.

Trump Force One — and a growing majority of the country — awaits this moment.