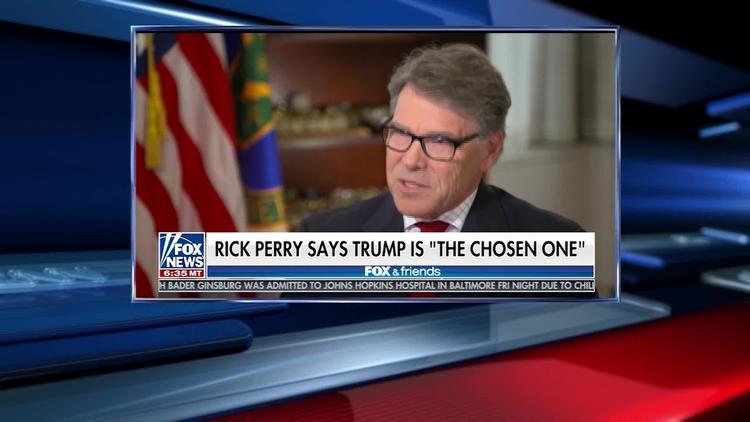 Ann Arbor (Informed Comment) – Jay Willis at GQ reports that Secretary of Energy Rick Perry said on Fox and Friends that Trump is God’s Chosen One. He said he told Trump, “If you’re a believing Christian, you understand God’s plan for the people who rule and judge over us on this planet and our government.”

Perry also said that he had written a memo for Trump about how God uses imperfect people, comparing Trump to biblical figures such as Solomon, Saul and David, who were also flawed.

This evangelical discourse that a providential God controls political power goes back to old West Semitic Religion. In the Ugaritic tablets the chief of the gods, El, is mainly concerned with royal patronage. In fact, there don’t appear ever to have been any temples to El, possibly because commoners didn’t have much to do with him– he was involved in putting kings on their throne. There were four levels of gods in the West Semitic pantheon. Beneath El were the dynamic young warrior and nature deities such as Baal. Beneath them were artisan gods like Kothar. The fourth level was the angels.

At least 3 of the levels show up in the Hebrew Bible, which is a henotheistic reworking of West Semitic religion insisting on monolatry toward the equivalent of El, i.e. God. Resheph, the god of war and pestilence, makes an appearance in Habakkuk 3:3-5 as a herald of El. And there are angels.

The idea of a providential God who bothers himself with appointing the guy who arranges for taxes to be collected and garbage to be disposed of is common in the world religions.

The Iranian government, for instance, also holds that God put the ayatollahs in power and that they rule with his divine approval.

Most evangelicals would not agree with this theory, even if they are sweet on Trump, but it is hard to see why not. If God decides who rules America, why would his power stop at the Red Sea? Wouldn’t all the governments be ordained by him? Wouldn’t he have put Binyamin Netanyahu in charge of Israel (though as far as can be told, God seems to be having second thoughts about that one).

Protestants don’t believe that Christ had a successor. Catholics believe that Peter was the vicar of Christ and that the popes are his successor. They at one point held territory, but have become spiritual leaders. In 1870, King Victor Emmanuel invaded the Papal Estates and ended the temporal power of the popes, as part of the rise of modern Italy. You would have thought that God would back the vicar of Christ rather than a minor royal ruling Sardinia-Piedmont. But the advantage of a belief in divine selection is that whatever happened was God’s will.

Shi’ite Muslims believe that the Prophet Muhammad (c. 567-632 A.D.) should have been succeeded as prophet-ruler by a blood relative, in a sort of dynastic principle. I talk about his life and teachings in my recent book:

The groups that became the Sunnis believed that any notable Muslim could become the commander of the faithful and should be chosen by the pious and notable Muslims.

The Twelver Shiites, who predominate in Iraq, Iran, and Lebanon, believe that Muhammad was succeeded by his cousin and son-in-law, Ali, who was married to the Prophet’s daughter Fatima. They had eleven descendants who Shiites hold should have come to power both temporally and spiritually. They mostly didn’t. The Twelfth such leader or Imam is held to have disappeared supernaturally as a small child and will one day return to restore the world to justice. (This is sort of like the Christian belief that Jesus ascended into heaven from which he will one day return).

The irony is that the Shiites were the ones who insisted hardest on a dynastic, hereditary principle of successorship to the Prophet, but they were left high and dry when the Twelfth Imam, Muhammad al-Mahdi, was the last of his line in the physical world.

What to do until he returns? Some Shiites became quietists, wanting nothing to do with government, since they saw all states as illegitimate in the absence of the Imam. Others said that you just had to put up with kings until the Imam returned, and you might as well work for them.

In the 20th century, two new theories grew up. During the 1906-1911 Constitutional Revolution in Iran, Ayatollah Mohammad Hossain Na’ini put forward the theory that in the absence of the Imam, the closest the Shiite community could get to God’s will was through parliamentary democracy. This theory seems to me to more or less underpin the thinking of today’s Iraqi ayatollahs.

Then in the late 1960s the Iranian cleric Ruhollah Khomeini put forth a theory that until the Imam comes back the seminary-trained Shiite clergy should be in power. That theory came to underpin the Iranian state after the 1979 Islamic Revolution in Iran and the deposing of the last king, Mohammed Reza Pahlevi.

So the official ideology of Iran’s ayatollahs is exactly the same as that of Rick Perry. God’s will puts leaders into office.

So I guess Ayatollah Trump and Ayatollah Khamenei are the current choices of the Man Upstairs according to these two Dominionist forms of theology.

One big difference is that Trump will be impeached and such a fate is unlikely for Khamenei. So maybe God likes him best?

The US is one of the last highly religious societies in the modern world, and Iran (whatever the people think) has one of the few theocratic forms of government. Religion has collapsed in the last 60 years in much of the world– the United Kingdom, for instance, or Montreal. Some 63% of the French report themselves non-religious, and 29% say they are outright atheists. I was talking to a person from France one time, and she sneezed. I said, “God bless you.” She shouted red-faced at me, “There is no God!” I thought, geez, it is a figure of speech.

But the theory that God wants us to have Trump and Khamenei as leaders seems to me certain to put the Americans and Iranians on a fast train to French-style secularism.

CBS 17: “Rick Perry: Trump imperfect but the ‘chosen one’”