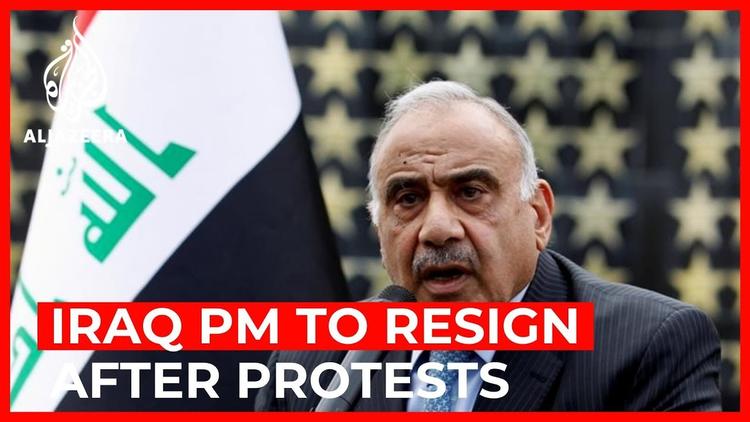 Huge crowds of demonstrators throughout Baghdad broke into raucous celebrations at the news, the local stringers for AFP report. Some interviewees among them, however, said that while Abdulmahdi’s departure would be a good first step, it was only the beginning of needed changes. The demonstrators have been demanding an end to corruption and the provision of services.

Violence nevertheless continued on Friday, with from 6 to 18 persons shot dead by security forces in the southern provisional city of Nasiriya, while in Baghdad at least one protester was killed at Rashid Street and 18 wounded. The two-day total of protester deaths was estimated at 50, according to Al Jazeera English.

The large protests in Nasiriya and the violent response by the government and allied militiamen led the powerful clan chieftains there to call for the minister of defense, Najah al-Shammari, to be arrested and tried.

Abdulmahdi’s announcement may have in part been impelled by Grand Ayatollah Sistani, who called on parliament to withdraw confidence from the government and cause it to fall and to arrange for new, clean elections, according to Al-Zaman [the Times of Baghdad]. He said a new government must meet the demands of the protesters for the sake of Iraq’s future and cease shedding the blood of innocents. Unlike the ayatollahs or high Shiite clerics of Iran, Sistani does not believe that the clerics should rule and seldom directly intervenes in everyday politics. He does hold that Ayatollahs have a responsibility to intervene to preserve a righteous, Islamic structure of society. His intervention is thus a sign of extreme anxiety on his part about the future of Iraq, which has had a Shiite-led government since the Bush administration held parliamentary elections in 2005 and Sistani encouraged voters to back a coalition of Shiite parties.

Even the Shiite militias backed by Iran that had supported Abdulmahdi, some of which are also party-militias with representation in parliament, said they would acquiesce in Sistani’s wishes. They have been accused of helping security forces attempt to repress the protests with sniping and live fire, at the direction of Iran’s intelligence services.

Iraq suffers from political gridlock and corruption in part because of the way the Bush administration rebuilt the government after the US launched a war of aggression and militarily occupied the country for 8.5 years. A handful of parties that were willing to ally with Bush have dominated politics ever since, and the Iraqi constitution produced under American rule all but guarantees a series of hung parliaments and a tyranny of the majority. The victorious parties practice a spoils system, capturing cabinet ministries and filling these departments with their own party hacks.

Iraq’s oil sales receipts since 2005 are estimated to have been at least $500 billion, but the national treasury is empty and all that money seems to have been embezzled. Although Iraq is an oil state, when I was in Baghdad a few years ago I found it run down and dowdy, with few new buildings and nothing like the vast array of gleaming skyscrapers that adorn Doha and Dubai.

The current Iraqi minister of defense, Najah al-Shammari, is a dual Swedish citizen and is being investigated for welfare fraud there, taking government payouts for his family’s living costs. If only he were unusual. Members of the Iraqi protest movement blame him for the hundreds of innocent civilian protesters who have been killed by Iraqi security forces, and Sweden appears to be investigating him for war crimes, as well. Al-Shammari denies the charges.