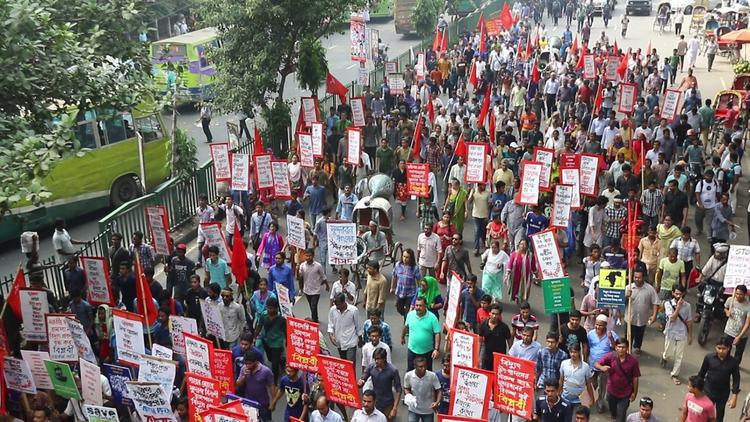 By Anthony Torres (1st Published at Waging Nonviolence) – The last few weeks have been a turning point for impeachment. Suddenly, dozens of members of Congress dashed at once to announce their support until the pro-impeachment faction had grown to a majority of the House of Representatives. And today the House overwhelmingly passed a resolution that laid out the procedures for an impeachment probe, giving them more authority to conduct an investigation. In the national conversation, impeachment went from politically infeasible to seemingly inevitable.

As someone who has been in the trenches of this fight, I can tell you that when Nancy Pelosi announced a formal impeachment inquiry on Sept. 24, she wasn’t just reacting to Donald Trump’s offenses with Ukraine, she was responding to pressure from an increasingly vocal movement.

I originally ignored calls for impeachment as a waste of time. But, after resisting attack after attack from the Trump administration, I felt our movements had to rethink our strategy. So, in August 2018, when I was approached to join a new grassroots campaign to impeach and remove Trump called By the People, I deeply aligned with their strategy of going on the offensive against Trumpism. Since then, as a volunteer and now political director of the campaign, my dedication to this mission has been driven by the belief that the stakes are simply too high to wait until the 2020 elections to remove Trump. He endangers our lives and shreds any checks on his power every day that he remains in office.

I’m also grounded by what we can accomplish together by waging a struggle for a democracy that works for all of us. If we don’t act, Trump will be emboldened to commit further abuses of power, including rigging elections in his favor, and his behavior will become the new normal regardless of who holds office. But, if we take the reins and contest for the soul of America, we can make this country what it should be — one that serves the many, not just the few.

In order to protect ourselves from rising authoritarianism and bring the public with us, it was clear we were going to need a grassroots movement for impeachment. Rooted in a strategy of civil resistance, By the People sees winning the backing of the American public and mobilizing them into highly visible forms of collective action as the key ingredients to toppling the Trump administration. Fortunately, more people have supported the impeachment of Trump than supported impeaching Nixon at the start of the Watergate scandal. This is a testament to how the broad anti-Trump resistance — from waging battles against the Muslim ban and family separation to defending health care and environmental protections — have created the conditions for Trump’s historic unpopularity.

Millions of Americans have long been ready to remove Trump, but few organizations and leaders offered them a pathway to putting an end to this administration. We needed to show Americans that impeachment and removal are grassroots tools to stop what we cannot tolerate. What’s more, they are winnable first steps to ensuring we are a country where all are equal before the law.

Starting in the weeks leading up to the midterm elections, we staged direct actions and street protests to capture the public imagination and to change the political debate. Just after the new Democratic House took power, we launched a pledge to impeach, which Reps. Rashida Tlaib and Ilhan Omar were the first to sign. In March, we launched a sit-in at Nancy Pelosi’s office on Capitol Hill to say loud and clear: It’s #TimetoImpeach. As dozens of volunteers sang and chanted from her office, Rep. Tlaib responded to the calls of the movement and announced a resolution for impeachment in the House.

One of the half dozen people arrested during the sit-in at Pelosi’s office was Davida Ginsberg, who took action with us as a way to combat her discouragement. As she explained, “I saw impeachment as a means to break through the disbelief that change is possible and show not just to our elected representatives, but each other, that we are unwilling to be bystanders as democracy is ripped apart.”

The resolution proved to be an inflection point. It provided us with a vehicle to organize impeachment supporters and gain new political champions. Shortly afterward, the rest of “the squad” — Reps. Alexandria Ocasio-Cortez, Ayanna Pressley and Ilhan Omar — along with several other members of Congress joined Tlaib as co-sponsors. In April, Sen. Elizabeth Warren announced her support for impeachment.

Just a few weeks later, we organized another act of civil disobedience on Capitol Hill — this time occupying the Cannon Rotunda — to keep the pressure going. With momentum came alignment. As public opinion polls started to shift further in our direction, By the People began to build alliances with groups that had so far sat out the impeachment fight, allowing the movement to take on a whole new scale.

As spring turned to summer, we launched the first national day of action for impeachment with MoveOn.org and other national groups that resulted in over 140 actions across the country on June 15. The pressure was working; every week, more and more members of Congress bent to pressure from their constituents and publicly endorsed an impeachment inquiry. Democrats on the House Judiciary Committee also began to take steps towards launching those very proceedings. During the August congressional recess, there wasn’t a place members of Congress could go or hide without having to answer whether or not they supported impeachment.

By the time Congress returned to session in September and the Ukraine whistleblower complaint hit the headlines, the foundation of the dam on impeachment was already set to burst. As I rallied alongside By the People activists and Reps. Tlaib and Al Green on Capitol Hill just one day before Pelosi’s announcement, I could feel the tide turning. Rather than follow the polls, we drove them and leveraged our growing ranks of active supporters to change the political terrain.

There are three phases to victory in this fight. The first one involved forcing the House to begin an impeachment inquiry, which we’ve now accomplished. Next, we need to get a majority of the House to pass articles of impeachment — something that is now in progress. Finally, we have to secure 67 votes in the Senate to remove Trump from office. To win these last two phases, it is going to take Americans coming together across race, gender, class and geography in sustained mass mobilizations across the country. By stigmatizing Trump and his whole agenda, we will make it a political necessity for Trump’s enablers to abandon him and set the stage for new political alignment in America that values all of our voices.

We don’t have to look far back or far away for guidance. Just this year, Puerto Ricans of all walks of life successfully tossed aside a corrupt governor who sold out his people for his own personal gain. Though triggered by a scandal over the governor’s leaked communications, the strikes and marches that spread across the island were about much more and became a stand against generations of colonialism, decades of austerity and months of crises imposed by those in power. We must follow their example and that of our neighbors in Lebanon, Ecuador, Chile, Sudan, and Hong Kong and demand the fall of a regime that doesn’t represent our interests. By removing Trump from office, we will show what kind of country we want to live in, and that his greed, division and hate will not be a part of it — and it will take millions of us to make that happen.

If we’re to put an end to the Trump administration, we must also seize this opportunity to make removal a truly transformative moment in our history. If we don’t act, we normalize Trump’s abuses of power as permissible by him and all who follow him. But, if we put a stop to this madness, we can isolate and stigmatize rising fascism and make a huge leap towards a freer, fairer and deeper democracy. Impeachment is about more than Trump — it’s about demanding a government that represents all of us rather than the interests of the wealthy few. If we win, we will change this country forever and we will emerge stronger for it. We will have answered for ourselves what we deem to be acceptable — and be equipped with a new muscle to topple governments that violate our freedoms.

The immediate task ahead of us is ensuring the House follows through this fall and votes on articles of impeachment that condemn the culture of criminality, bigotry and corruption of the Trump presidency. Polls now show consistent majorities of Americans in favor of impeaching and removing Trump from office. When we speak clearly of the full extent of Trump’s high crimes and abuses of power, the majority of the public agree: We must get rid of this lawless president.

The only thing powerful enough to stop the Trump administration is us. Congress will not fulfill its constitutional duty until we make it a political necessity for them to act. On Oct. 13, By the People and Women’s March, joined by 18 national partners, hosted over 60 #ImpeachNow marches nationwide to exercise and recruit the growing numbers of impeachment supporters into this movement. But, one day of action is not enough. Our rapid response corps will be responsible for consistently taking to the streets and showing up again and again in every zip code. We must force every one of our elected representatives to go on the record and make a choice: Are they with Trump or with all of us? Just as our ancestors stood up to kings, the Confederacy, fascism and Jim Crow, so too must we show that Americans will not tolerate the Trump administration.

Via 1st Published at Waging Nonviolence