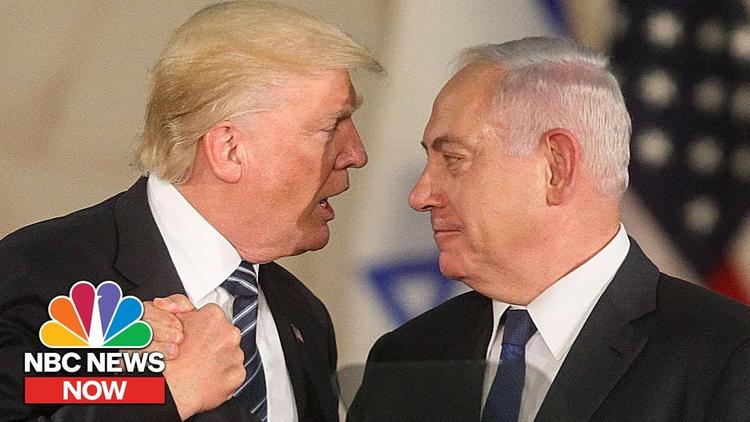 San Francisco (Special to Informed Comment) – The trajectories and political fortunes of Israeli PM Benjamin “Bibi” Netanyahu and President Donald Trump are so closely aligned that there’s no irony it. They invested heavily in one another and may be experiencing parallel falls from “grace,” which was never a defining trait of either man. The most striking element is how both men attack the institutions and people, who are investigating them for abuses of power and standing.

While Trump flails with apoplectic delirium on Twitter in response the impeachment hearings, Bibi faces a complex indictment for bribery, fraud and breach of trust; as Israel careens towards its third election in less nine months. In another decade and context, it might be considered ironic for an American President and Israeli PM to be facing parallel crises. But both instances are of their own making, and to some extent, their mutual investment in one another’s fortunes.

As the Likud Party considers a challenge to Bibi’s leadership at the top of their ticket, Trump faces mild discontent from the few thoughtful Republicans who remain in the party. But whereas, the Republican Party has bet all its chips on Trump’s ability to endure, more Likudniks are hedging their bets on Bibi, based on survival instincts.

Bibi’s leadership in Likud is challenged by Gideon Saar, who called out the PM’s characterization of the indictment as a “coup,” by arguing, “Not only is it wrong to say that, it’s also irresponsible to say that.” Bibi defends his position by demanding “an investigation of the investigators,” while Trump’s defenders in Congress hammer and yammer about a fictitious abuse of process; and attack the credibility of the lawmakers, career diplomats and military officers who testify. Saar argues that unless Bibi steps down, Israel will remain “politically paralyzed,” or lose any advantage Likud ever had. Republicans in America meanwhile, prefer political paralysis under Trump to any other option.

Benny Gantz, Bibi’s primary challenger at the top of the Blue and White Party accused Bibi “holding Israel hostage to his legal battles.” When Gantz was also unable to form a government, he made Bibi a generous offer to form a “unity” government, whereby Gantz would hold office for two years, and be succeeded by Bibi for the next two. But Bibi refused that because his hold on the Premiership keeps him out of jail, and yielding would result in losing immunity. Now that he’s indicted, there’s little chance he would be eligible to return as PM in two years.

While Saar is a legitimate primary challenger to Bibi, Trump’ Republican Party does its best to minimize and marginalize any potential challengers. They’ve cancelled the Republican primaries in Arizona, Nevada and South Carolina, and other Republican state committees are considering same. Yet three Republicans with admirable service records are trying to enter the fray; former Republican Rep. Mark Sanford of South Carolina, former Rep. Joe Walsh of Illinois and former Massachusetts Gov. Bill Weld. Like Saar in Israel, they recognize that the longer the party waits to jettison Trump, the harder and longer it will be to recover from the damage. They see Republicans losing mid-term elections and get the memo about political survival. Likud however, expects to hold a primary, as a sign of waning faith in Bibi.

Both leaders use thuggish language to defend themselves with Bibi demanding “investigations of the investigators,” and threatening that those driving his prosecution “must be taken care of.” Trump feels like the best defense against impeachable offenses is to commit more impeachable offenses in full view, including witness intimidation in real-time via Twitter. He interjected himself directly into the hearings by tweeting threats toward Ambassador Marie Jovanovich WHILE she was testifying. That gave me a Godfather II moment, harking back to the underling guffawing, “Yeah, the Corleones had lots of buffers.” Trump revealed himself as a low-level thugs, confident in his ability to intimidate.

Trump’s supporters have dreamed up the “deep state” concept to scapegoat his problems; that is, the legions of career civil servants and government employees who take seriously their oath “to protect and defend the Constitution against all enemies, foreign and domestic . . .” The Republican defenses are all fictionalized on unfounded conspiracy theories and wild fantasies, concocted by the dark minds of American Neo-Fascists and White Nationalists, such as Stephen Miller. That these fringe elements are now involved in presidential policy-making is frightening.

Both men use the standing of executive power to defend themselves from abuses of power and standing, with thuggish elements. As long as he remains PM, Bibi gets legal immunity from the Knesset, and preferential treatment from the prosecutors. Unless he is convicted, and can legally serve as PM. But the Parliamentary committee that determines his immunity status cannot meet until a permanent government is formed.

The Ha’aretz writer Yossi Verter offered a colorful description of Bibi when he responded to the indictments: “He seemed empty, frightened, desperate. Like some kook who wanders the streets muttering meaninglessly into the air, he reiterated the talking points and clichés that he and his spokespeople have been reciting with varying intensity since 2017. The defendant Netanyahu is more isolated than ever. His inner circle is filled with dubious characters, some of whom were recently questioned by the police on suspicion of witness tampering and harassment.” This could just as well have been written by an American writer describing Trump’s reaction to the impeachment hearings.