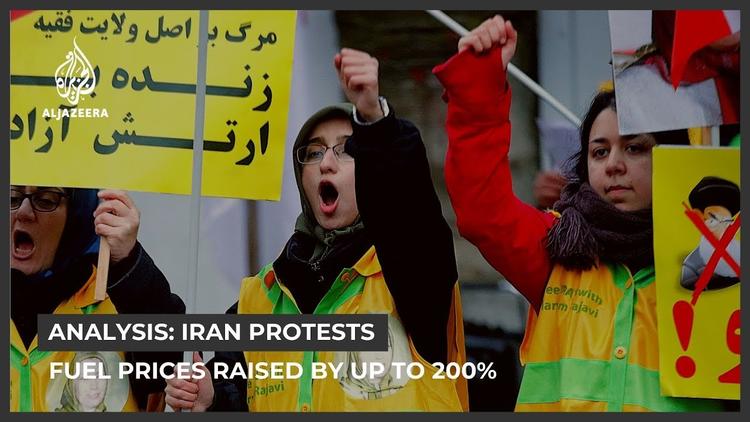 (RFE/RL) – Iranians are blasting their government for rationing gas and greatly increasing its price, with many concerned that the move will lead to inflation and greater hardship in a country where so many people are struggling to make ends meet.

The state-run National Iranian Oil Products Distribution Company said in an overnight announcement on November 15 that each motorist in Iran will have to pay 15,000 rials ($0.127) per liter of gas for their first 60 liters each month, an increase of more than 33 percent over the current price.

The move comes amid crippling U.S. sanctions that have resulted in a devastating decline in Iran’s oil income — with Iranian President Hassan Rohani complaining earlier this week that Iran is experiencing its most difficult times since the 1979 Islamic Revolution.

The unpopular decision to raise gas prices was announced at midnight — without prior notice — prompting some to compare the government to bandits.

In Behbahan, some protesters chanted “gasoline is more expensive, the poor have become poorer.”

There were some reports of violence breaking out, with some gas stations being torched and calls for people to stop using their cars to protest the new prices. Chants of “Turn Off Your Engines” were heard in Ahvaz.

Social media was full of criticism of the new price moves.

“The most important economic news of the year was announced at [midnight] on a Thursday so that people are taken by surprise. [On Friday] the media outlets are closed, there are no newspapers,” said a user on Twitter, adding that “[he wonders] if [Iran has] a government of bandits.”

“The price of gasoline has tripled,” noted journalist Parviz Barati on Twitter, while predicting that “the price of rents, transport, and goods will multiply.”

Inflation has soared in the country in recent months and the country’s currency, the rial, has lost some 60 percent of its value since U.S. President Donald Trump withdrew the United States from the international Iranian nuclear deal in May 2018.

Additionally, the IMF has predicted that Iran’s economy will shrink by an astronomical 9.5 percent this year.

Journalist Mohammad Aghazadeh said the price hike will generate more income for the government while hurting the poor, who are unable to pay higher prices for gas and everyday items.

He added that the decision is not likely to improve the country’s air pollution, which is a major problem in big cities such as the capital, Tehran.

“The air will remain polluted unless the wind blows, or it rains,” he said, suggesting that most Iranians will continue to use their cars despite the price hike.

“No one [in the government] cares about people’s suffering,” he added on Twitter.

The extremely cheap gasoline — Iran has one of the cheapest costs for gas in the world — has been a source of income for many unemployed, who use their cars as taxis or work for ride-sharing companies.

The managing director of the country’s Taxi Management and Supervision Organization, Alireza Ghanadan, said taxi drivers don’t have the right to arbitrarily raise their fares.

Ghanadan told the semiofficial ISNA news agency that the organization’s experts are looking at whether the new quota will be enough for taxi drivers or else they would have to consult with authorities.

Hard-line journalist Abbas Kolahdooz, a former editor at the semiofficial Tasnim news agency, said the government’s move is likely to cause a price hike in goods that will please the U.S. government, which has been accused of ratcheting up pressure on Iran to encourage people to rise up against the clerical establishment.

“Pressure on the people and social discontent is exactly what America wishes for,” Kolahdooz said on Twitter.

The head of Iran’s Planning and Budget Organization, Mohmmad Bagher Nobakht, said the proceeds from the new price hike will be used to provide additional subsidies for 60 million low-income Iranians.

He said Rohani said that “all extra revenues from the gas-price reform should be paid back to the people.”

But Iran faces a major budget deficit and needs new means of revenue in the face of the catastrophic decline in its oil revenue due to U.S.-led sanctions.

Fuel rationing introduced in 2007 under former President Mahmud Ahmadinejad to curb consumption led to anger and violence, including the torching of several gas stations. It was halted in 2015.

A source in the Interior Ministry told ISNA that no violence had been reported and added that some social-media accounts outside the country had spread false reports of the torching of gas stations “to provoke people and stir up riots.”