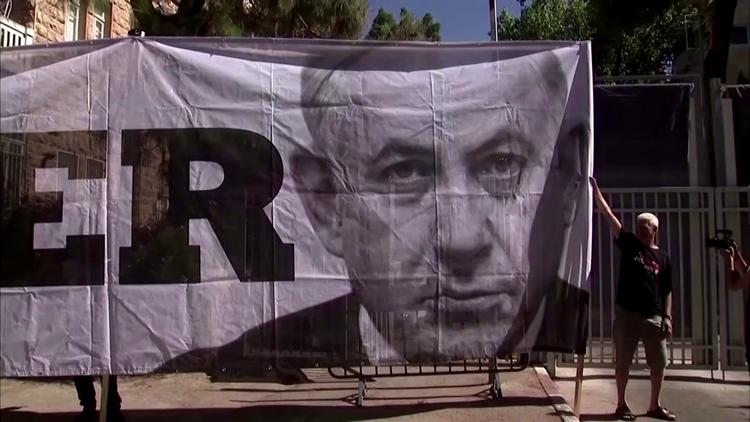 With the declaration of the leaders of Israel’s two major parties, Likud led by Benjamin Netanyahu and Blue-White led by Benny Gantz, about their failure to form the next government, despite the expiry of the deadline allocated to them, Israel seems to soon head towards holding a third election round in March 2020.

Until then, Israel is expected to remain in a state of governmental and political paralysis, which will reflect on the relationship with the Palestinians. With the Palestinian Authority (PA) the relationship will likely worsen, especially after the US declaration to recognise the settlements, and the possibility of Netanyahu’s declaration of the annexation of the Jordan Valley, which will eliminate what has remained of the two-state solution. And with Hamas, a military escalation may occur.

Less than a hundred days separate us from the third Israeli elections, due on 3 March 2020, amid the intensification of party rivalry, and the occurrence of successive developments that may include the overthrow of Netanyahu, who describes himself as “King of all kings of Israel”, and the intervention of the Palestinian factor in the midst of the intense election campaigns. This has been evident in the recent security developments in the Gaza Strip, the West Bank and Jerusalem.

It has become clear that the forthcoming Israeli elections will be subject to multiple external influences. This starts with any upcoming escalation round against Gaza, then Israel’s declaration of the annexation of the Jordan Valley in the West Bank, reaching the expected obstruction of the Palestinian elections, especially in occupied Jerusalem.

Therefore, the Israeli community asserts that the link between these security events in Gaza, the West Bank and Jerusalem is neither spontaneous nor coincidental. It is instead the outcome of coordinated efforts, which are accompanied by what can be described as the outbreak of internal wars between Israelis against the backdrop of elections, through reciprocal accusations that reached unprecedented levels.

Monitoring of the Palestinians, as well as many other countries in the region and the world, is intensifying. Moreover, Israel’s constitutional and legal crisis is evolving every hour. This is especially so after the indictment against Netanyahu, came because this crisis is no longer an internal Israeli affair, but rather an Israeli, Palestinian, Arab and international affair, amid Israel’s great power and influence beyond its geographical borders.

Israeli Prime Minister, leader of Likud Party Benjamin Netanyahu and his wife Sara Netanyahu (L) cast their votes during the Israeli elections, at a polling station in Jerusalem, on 17 September 2019 [HAIM ZACH/Anadolu Agency]

Thus, the Palestinians are the most affected party by the results of the upcoming Israeli election. The Palestinian positions on these results can, therefore, be divided into two levels: the Palestinian Authority in the West Bank and Hamas in the Gaza Strip.

Regarding the first level, Palestinian President Mahmoud Abbas makes no secret of his disappointment and frustration withholding a third Israeli election round. He has vigorously and indirectly pushed for the defeat of Netanyahu in the previous two rounds in April and September 2019 and has stated in several implicit statements that the Israelis must vote for the peace option and resume negotiations.

The Palestinian Authority’s latest implicit intervention in the Israeli political crisis was represented in Abbas’s statements to Israeli military radio station a few days ago, revealing that he had asked to meet Netanyahu more than 20 times. Still, the latter refused, and Abbas asked the Israelis to vote for those who the pro-peace candidate, referring to Gantz and his party.

The Palestinian Authority’s fears of another victory of the Israeli right-wing camp, whether led by Netanyahu or other far-right leaders, in the event of his overthrow, seem legitimate and logical and have a thousand explanations and justifications. This is because this victory means the elimination of the rest of the settlement project that the Authority and its president committed. The PA has thus not set for itself a line of manoeuvre with other options, forcing it to place its interests at Israel’s hands.

Most of the programs of Israel’s left-wing, centrist and right-wing parties today, are inclined to declaring rather than hinting that the Palestinian Authority is not an involved party in the negotiations, and is not worthy of reaching political agreements with it. This means that the past years of political and consultation break between the two sides are likely to extend for more years while maintaining the security coordination that benefits Israel without the Palestinians.

Holding the third Israeli elections requires the PA to come up with more severe positions, away from tactics, manoeuvres, and playing with words. The day after the announcement of the upcoming election round, will mean more settlement decisions, and annexation of large parts of the West Bank, especially with the recent US stance, which legitimized the settlement and paved the way for the declaration of annexation of the Jordan Valley, leaving no room for the declaration of a Palestinian state. Hence, the two-state solution will be aborted.

The Israeli parties participating in the upcoming electoral race believe that the West Bank is the real arena of war between the Palestinians and the Israelis, which will hold a prominent space in the electoral campaign of various Israeli party lists, especially the right-wing parties.

In its last two mandates, following the April and September elections, the Israeli right-wing government has endeavoured to install more political and field gains on the ground in the West Bank, starting with the establishment of more outposts, aiming to consolidate the features of Israeli security and social control, dispel the remaining Palestinian sovereignty, even on Area A, and impose the Israeli law on settlers there.

Today, the West Bank seems to be targeted by the Israeli political and partisan powers. It is expected that the Israeli electoral campaign will focus on the most appealing electoral promise given by the Israeli right, represented by the Likud- National Liberal Movement and religious Israelis; i.e. the annexation of the West Bank. This promise includes the settlement blocs, which are considered as Israeli areas and which are neither occupied nor the subject of dispute with the Palestinians, in addition to the decision not to give up any part of the West Bank, under any future peace project.

The Israeli centre-right, represented by the Blue and White alliance and Labour party, agrees with the extreme right regarding the West Bank. However, it is trying to achieve more popularity by deciding on the establishment of a Palestinian state in the West Bank, on the condition of giving only some parts of it to the Palestinians, while maintaining full security control over the area, and not allowing the PA to have independent borders with neighbouring countries.

The rest of the Israeli left presents its old-new orientation of withdrawal from the West Bank and a return to the 1967 borders to achieve the principle of a two-state solution, with obtaining security assurances that this will not endanger Israel’s security. This position is rejected by large segments of the Israelis, who chose to support the right after each election.

With the approaching elections, the Israeli public opinion wavers between the right and the centre regarding the issue of the West Bank, while insisting to keep the area under the Israeli security and social control, despite approving under international pressure of the establishment of an autonomous rule or what the Israelis call the State of Minos.”

The next few weeks and before the Israelis can head to the polls in March 2020, the West Bank is expected to witness more security incursions, as the Israeli authorities want to maintain the illusion of imposing strict security measures in the region, and not relying on any other party to ensure the security of the Israeli settlers. This security and military measures cannot be separated from the ongoing fierce electoral competition, given that the Israeli settlements, which will be the scene of electoral campaigns, cannot be given up.

Regarding the situation in the Gaza Strip and its impact on the Israeli elections, the Palestinians, while the Israeli elections were in the course of preparations, have been repeating the famous phrase that “Palestinian blood will be sacrificed on the altar of the Israeli ballot box”. Although this sentence has been relevant and credible in previous elections, it does not mean it will apply on each future electoral race.

At this level, the issue is only about the Israeli side, because the Israelis, and I mean in this context the decision-makers, know that the price of going to a military adventure against the Palestinians, especially in Gaza, may backfire on those who initiate it, especially in the middle of a fierce electoral race.

Any Israeli escalation options in Gaza to get ahead in the elections are no longer available, as the Palestinian resistance acquired more maturity and a close understanding of the nature of the Israeli political and partisan structure, as evidenced in recent escalation rounds, in addition to its massive military and armed capabilities. The Palestinian resistance realised that it would no longer be stepped on for an election battle between the Israelis.

Therefore, according to common sense, Israel will maintain the status quo on the Gaza border until the elections are held. There will be no significant military escalation leading to a war, as the armed conflict’s destructive echoes will resonate inside Israel under the resistance rocket explosions, resulting in the worst electoral campaign ever held in Israel. Hence, the Israeli authorities cannot sign a long-term ceasefire will with Hamas, as the Israeli opposition will scold the current government for making such an agreement with a movement which calls for the destruction of Israel. However, the question is: “Will such an approach stand until next March, as unexpected surprises can take place at any given time?”

The Straits Times: “Israel could face third election this year”