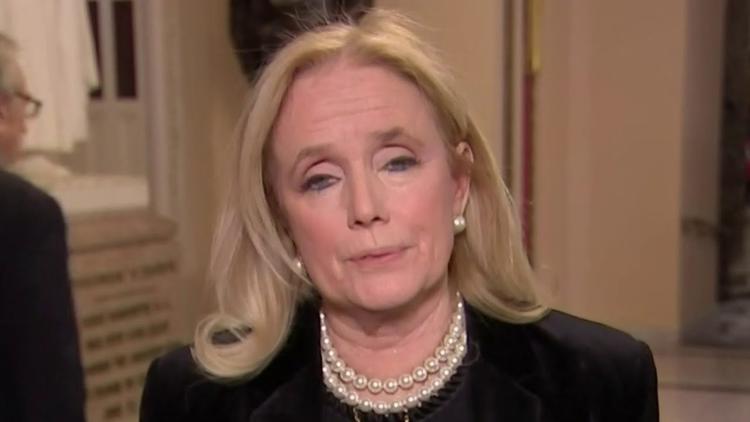 ( Politics/Letters ) – Watching Trump in Michigan this week talking about Debbie and John Dingell, I was struck by how he spoke the words as well as by what he said. Commentators noted the offenses against Dingell, the universally liked, longest serving Congressman from Michigan, who is recently deceased and unable therefore to respond to the suggestion he may be in Hell not Heaven right now. But the real target of Trump’s ire was not the man but his widow, Debbie Dingell, who at that moment was in Washington D.C. voting for his impeachment. Clearly Trump had been harboring some wild hope that she might vote against impeachment. Why? Because, in his mind, he had once done her a favor.

Two years ago when Kirsten Gillibrand sided with women accusing Trump of sexual harassment, Trump saw that as a personal betrayal, too, and he tweeted a sexualized accusation: “Lightweight Senator Kirsten Gillibrand, a total flunky for Chuck Schumer and someone who would come to my office “begging” for campaign contributions not so long ago (and would do anything for them), is now in the ring fighting against Trump. Very disloyal to Bill & Crooked-USED!”

In the two years since, Trump has continued to, as they say, “do battle” on Twitter, imagining himself some sort of 21st century gladiator. He has also led more rallies, and in the course of those he has habituated himself to sexualized impersonations that reek of the locker rooms to which calumnies like his were once confined. A mainstay of his “act” now is the simulation of sex between Peter Struyk and Lisa Page, two employees of the FBI, involved with the Department’s Russia investigation. He calls them “lovers” (they had an affair) and positions himself as Peter Struyk, breathing heavily. Here, no doubt, is the real fantasy of the bit: the lumpy 70+ year old makes himself the fit and virile FBI agent who gets to have affairs. In the bit, Trump accents the L in the word “lovers” and in Page’s first name, his tongue lingering on his upper teeth, so that the letter itself becomes lascivious. He reenacts their ‘passion’ with short breathy sentences that sound like something out of a bad Harlequin Romance. Moving in an out of character as Struyk, he also positions himself as the couple’s aphrodisiac, as if their concerns about his possible election are what turned them on. His obvious enjoyment of the bit is not just in its lasciviousness. He also enjoys how it positions his election to office as the cold shower that douses their desire. (His e-Lection.)

Had Trump been at a rally at the time of Gillibrand’s #MeToo criticism of him, he almost certainly would have recalled her visit to his office in a similar way. Conveniently, her name has L’s in it too.

In Michigan on December 18th, Trump added to his act the story of a conversation he had with Debbie Dingell when her husband died. When he impersonated her talking to him, he used the same short breathiness he routinely uses to simulate Struyk and Page having sex. But in Michigan, the story isn’t about sex, exactly, or, better, it is about what the sex is always about for Trump: domination and debt. When Trump uses the same breath, pace, and cadence in the Dingell story as in his retellings of his story of Struyk and Page, it is because in both a woman is being owned, claimed by a man.

“Then you have this Dingell. Dingell. You know Dingell from Michigan, you know Dingell, you ever hear of her, Michigan? Debbie Dingell, that’s a real beauty. So she calls me up like eight months ago. Her husband was there a long time — but I didn’t give him the B treatment. I didn’t give him the C or the D. I could have. Nobody would have — I gave the A+ treatment. ‘Take down the flags!’ ‘Why you taking them down?’ ‘For ex-congressman Dingell.’ ‘Oh OK.’ ‘Do this, do that, do that, rotunda.’ Everything. I gave him everything. That’s OK! Don’t want anything for it. I don’t need anything for anything. She calls me up. It’s the nicest thing that’s ever happened. ‘Thank you so much. John should be so thrilled. He’s looking down. He’d be so thrilled. Thank you so much, sir.’ I said, ‘That’s OK, don’t worry about it.’ Maybe he’s looking up. I don’t know. I don’t know. Maybe. Maybe. But let’s assume he’s looking down. But I have him A+, not A, not B+, not B. I have him the A+, and she called me, so nice, oh. I won’t go into the conversation because it’s not fair to do that. But all you want to say is, let’s put it this way: it was the most profuse thank-you that you could ever get. On a scale of 0 to 10, it was a 10. OK. So that was what, February or something. Now they talk about this phony impeachment. And she’s out there. ‘Well, we have to look seriously at our president because he may have violated the Constitution of the United States. And I can’t be happy with that because I love our country. I love this and I love that.’ She loves everything. I said, ‘She’s a no, OK.’ No but I look at her and she’s so sincere and what happens? ‘I vote to impeach Trump.’ And you know what — I didn’t say — who the hell knew this was even going to come up.”

So she calls me up like eight months ago. The tell is in the lie. Trump says Congresswoman Dingell called him up. She says the truth is he called her, to offer condolences. And she thanked him for that. Did she also thank him for the honors her husband was given in death and burial? We would need a transcript to know for sure but it seems likely the President asked to be thanked, perhaps by listing all the things that were being done to honor John Dingell for his service, lowered flags, rotunda viewing, and so on, to which thanks would be the only polite response but also the desired one. Extracting the thank you is a step in setting up the account for future repayment of the “A” treatment Trump claims he “gave” to John Dingell.

“I gave him everything.” But Dingell earned what he got, Debbie Dingle said the next day. It did not need to be given. And in any case, as CNN points out: “Dingell did lie in state at the U.S. Capitol — a massive honor, to be sure, but one conferred on him by Congress, not the president.” The details of who did what don’t matter to Trump. As President, he surely imagines he had the power to stop the Congressman from getting the honors he had earned (just like Trump imagined he had the power – not the authority, but the raw power — to stop Ukraine getting the money it had been allocated). He expects to be thanked for not unjustly thwarting the honors a man spent a whole life earning.

And then, absent that fealty, Trump simulates a sex-sounding scene of gratitude with the widow who betrays him: it is ungrateful to vote for impeachment. What is the word we have for this sort of man, a man who demands to be thanked for not ruining your life and everything you’ve worked so hard for, because he could ruin it if he wanted to? That sort of man is an abuser. He thinks, and he wants you to think, that your very existence depends on him. You must thank him for not killing you. He could do it, too.

I am reminded of the novel, Room, where a young women is kept by her kidnapper for years in a tiny room that becomes her whole world and she depends on him for everything. The kidnapping and confinement can be done otherwise, too, without the kidnapping and without the room. Men like Trump often attempt to box others in. I want him in a “public box,” Trump said about Ukraine’s leader. Sometimes Trump prefers a private box. That was his plan with Debbie Dingell. He did her a favor, he claimed. He expected acknowledgment of her dependence on him and he exacted vengeance for her betrayal. This sort of man inserts himself into all that is otherwise causal, natural, or human so that somehow those around him are made to understand that everything they have depends on him. His will. The air they breathe. The clothes they wear. They are his. Katie Hill’s leaked personal photographs are a man saying “you dress and have dignity because I let you. And if I choose not to, then you lose those things.” He is saying “I decide” what job you will have, what renown you enjoy. That is one reason why her decision to leave Congress was sooo painful to so many. It was her decision, yes; but it was driven by a man claiming the power to decide how she lives, what she does, who she loves.

Debbie Dingell was asked if she wants Trump to apologize. No, she said, several times in response to the question. It was a smart move. Such a demand would put her into the transactional domain in which he is most comfortable and into which he has already fictionally put her. She would be begging (for an apology) and he could be withholding, like a man in charge: You want it? Jump higher. Cook better. Change your vote.

Instead, she was photographed holding hands with Nancy Pelosi. Such handholding represents shared power and it can be very powerful when wielded against the isolation that is the tyrant’s tool. In this context, the American Isolationism of Make America Great Again suddenly takes on a new meaning: its aspiration is to isolate all of us from friends and allies outside the border, and as in Room, it is a sick and evil aspiration.

Republished from Politics/Letters with author’s permission.
—–