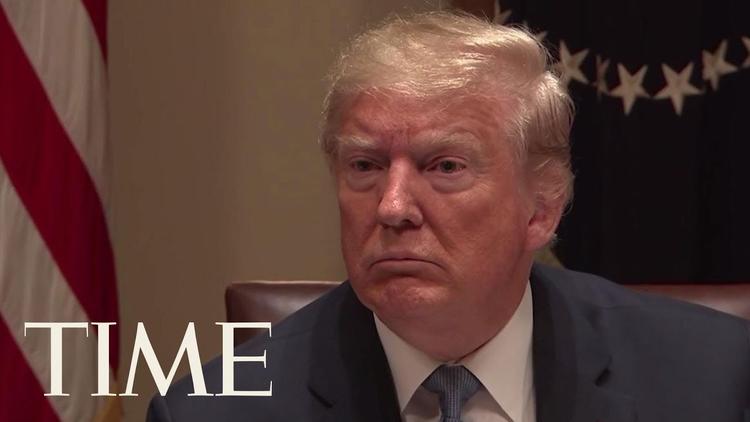 Robby reflects the views of many older white workers who are critical of the system and blame Democrats and liberals for its breakdown.

I first met Robby Robertson during the 1969 General Electric strike. He was a young, militant worker fighting for a decent contract and social justice. He considered himself a “radical humanitarian.”

We later worked together on the assembly lines at National Can Corporation in San Leandro, near Oakland, fighting management and conservative union leaders. He turned me on to outlaw country musicians like Willie Nelson. We partied and struggled together against the bosses, against racism, and for immigrant rights.

That’s why I was surprised to learn recently that Robby Robertson supports Donald Trump.

In 2016, Robby had soured on Hillary Clinton because of what he considered her corruption and anti-working class policies.

“Trump is my man because I believe he loves this country and wants what he believes is best for it,” Robby tells me. “I have not witnessed that from the left side of the aisle.”

Robby reflects the views of many older white workers who are critical of the system and blame Democrats and liberals for its breakdown. I strongly disagree with his views but respect him, as a man who turned his life around after years of difficulties. (More on that later.)

And so I am writing this open letter to you, Robby, in hopes we can at least have a dialogue, if not a change of heart.

Like most Trump supporters, you respect the President because you believe he’s carried out his campaign promises. He did what he said he would do, you say. Well, let’s take a closer look.

You say that Trump “operates like a businessman. His foreign policy hasn’t been that harmful. Everyone makes bad decisions. I believe if Hillary had won, the country would have been far worse off.”

First of all, we agree that Hillary Clinton, an unrepentant war hawk, would have made a bad President. As a US Senator, she voted for the Iraq and Afghanistan wars. She supported new wars in Libya and Yemen, and vastly expanded the number of US troops fighting overseas.

This week, The Washington Post printed US government documents showing that Obama consistently lied about the Afghan war; so did George W. Bush and now Trump. Those three Presidents are responsible for the deaths of more than 2,400 US soldiers and more than 38,000 Afghan civilians. The war has also cost the United States $2 trillion and counting.

While claiming to oppose “endless wars,” Trump has expanded every one of them. This chart tells the story. 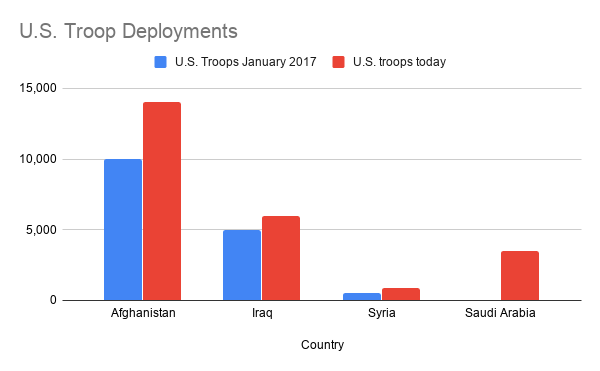 Today, the Pentagon has 200,000 troops stationed overseas on nearly 800 military bases. That doesn’t look like bringing the boys home. In fact, the deployment costs taxpayers between $160 billion and $200 billion per year—money that should be going for health care, education, and infrastructure.

Still, Trump would have my support if all these troops were actually protecting the country. But our President has been unusually candid in admitting why soldiers are actually deployed.

For instance, Trump was going to pull the troops out of Syria but then sent them back in to occupy Syria’s oil fields, offering US oil companies the right to pump the oil.

Now Trump is considering sending 14,000 more troops to the Persian Gulf, including Saudi Arabia, which would double the US presence there. The President openly admits he favors the Saudi King because he bought tens of billions of dollars worth of US weapons and because he supplies the West with oil. US troops are being put in harm’s way to protect the profits of companies like GE, where we walked the picket lines.

Trump claims his America First policy has restored US prestige in the world. In fact, it’s the opposite. I’ve reported from ten countries during the Trump era, and even the United States’ closest allies don’t trust Trump. He is seen as reckless and unpredictable, and as a bully for breaking international agreements and imposing tariffs.

Trump threatened to bring “fire and fury” down on North Korea, only to back down when challenged. When he accused Iran of attacking oil tankers in the Mediterranean and bombing Saudi oil facilities, he took no military action. When Turkey invaded northern Syria and attacked the Kurdish militia allied with the Pentagon, he allowed Turkey to proceed.

Don’t get me wrong. I’m actually glad Trump hasn’t attacked Iran, or Mexico for that matter. In fact, I’d like to see well-planned, rapid withdrawal of US troops as part of a major revamp of US foreign policy. But Trump is not withdrawing troops, and his empty threats erode US credibility.

Trump hasn’t ended the endless wars because he’s not willing to take the hard steps needed to end them.

Okay, you say, but at least Trump has delivered on the economy.

“People hate Trump because he stepped outside the box,” you tell me. “He doesn’t play politics; he’s a businessman.”

The economy has grown about 2.5 percent per year under Trump and unemployment has hit a five-decade low of 3.5 percent. People, including students and homemakers, are coming back into the workforce because there are more jobs.

And yes, Robby, if a President Hillary Clinton had the same economic numbers, the Democrats would be trumpeting her great successes. But I would point out that for Clinton, as for Trump, this economic expansion is a house of cards that hasn’t helped workers anywhere near as much as claimed. The good-paying manufacturing jobs have not returned in significant numbers.

Trump holds rallies and media events at factories, where he has supposedly stopped management from moving overseas and saved hundreds of jobs. But months later those factories are still closing, moving overseas, or laying off workers.

The same thing happens when Trump claims that his tariffs have boosted American jobs. His policies temporarily benefit some industries while badly hurting others. When Trump imposed tariffs on foreign steel manufacturers, the protected US companies raised their prices, which hurt manufacturers who buy steel. Some of those companies then laid off workers to save money while passing on some of the price increases to customers.

Jobs in primary metal manufacturing have gone down by 7,900 since January, including job losses in the supposedly protected aluminum industry.

For the first time since the 1920s, the United States has started trade wars with dozens of countries, including Canada, Britain, and France. Those countries retaliate with their own tariffs and businesses get worried. Worried executives don’t invest, and that will help bring on recession.

“Trump’s tariffs have caused business investment to fall for two consecutive calendar quarters, which usually indicates that a recession will start soon,” David Kotz tells me. He’s an old friend of yours and mine, Robby, and an economics professor emeritus at the University of Massachusetts, Amherst.

I can’t predict when, but a big recession is coming, and Trump’s policies are helping bring it on.

Robby, I don’t know if any of my arguments make sense to you, let alone have changed your mind. While we disagree, I respect your views. I know you went through some hard times in the 1980s. You wrestled with the demons of drug and alcohol addiction, found Christianity and have remained clean and sober for 25 years. I’m an atheist, but I respect any religion that helps people that profoundly.

You’re a talented artist and I still treasure the drawing you gave me of Willie Nelson. I look forward to having coffee with you soon.

By the way, Robby, you might want to take a look at Willie Nelson’s outspoken opposition to Trump, particularly how he criticized the imprisonment of Central American children at the US-Mexico border.

“What’s going on at our southern border is outrageous,” Willie said. “Christians everywhere should be up in arms.”