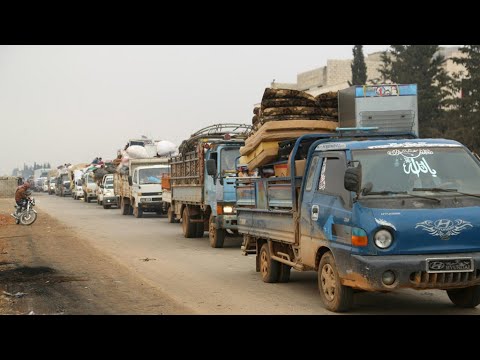 Ann Arbor (Informed Comment) – Kevin Liptak at CNN reports that Trump on Thursday tweeted on the Idlib campaign of the current Syrian government and its Russian backer. Trump said, “Russia, Syria, and Iran are killing, or on their way to killing, thousands of innocent civilians in Idlib Province,” he tweeted. “Don’t do it! Turkey is working hard to stop this carnage.”

The comment comes as a surprise given Trump’s previous acquiescence in Russian policies in Syria and Ukraine. Trump has, this fall, however, apparently fallen under the influence of Turkish president Tayyip Erdogan, who opposes the campaign in Idlib. In October, after speaking with Erdogan on the phone, Trump gave Turkey the green light to invade the Kurdish northeast of Syria and to attack US allies among the YPG Kurds (who had fought ISIL for the U.S.) Trump pulled 1,000 U.S. special operations personnel out of the Kurdish area, who had been embedded with Kurdish forces.

There is no reason to think Trump’s intervention in the matter will go beyond his tweet, however, or that Russia and Syria will cease their offensive as a result of his message, which was riddled with typographical errors in its initial version. The Syrian government has gradually crushed the resistance and clearly wants direct control of all of Syria. The Idlib campaign was only a matter of time.

We can only speculate about Trump’s motives. Here’s my educated guess. Trump is facing impeachment in the Senate in January, and many Republican senators are deeply upset that Russian president Vladimir Putin has propped up the al-Assad regime and has projected force in the Middle East. Trump’s usual kowtowing to Putin over the Idlib offensive would have angered those senators. So I think he is playing impeachment politics with the lives of the people in Idlib (some 3 million of them, most of whom are not militiamen of any sort).

The Syrian Arab Army, with Russian air support and the help of Shiite militias from Lebanon, Iraq and Iran (the latter mostly actually Afghans), has gradually defeated the rebel forces, clearing them from the area around Damascus and retaking cities such as Homs, Hama and Aleppo. Many of the remaining fighters, mostly Sunni Arab fundamentalists (some of them radical and with ties to al-Qaeda), have taken refuge in the rural, northwestern province of Idlib. It is the last enclave of armed resistance left, and it has survived in part because Turkish put a security umbrella over it.

Why Turkey showed so little resistance to the current Idlib campaign is unclear. Some observers have speculated that Russia agreed not to block the Turkish incursion into the Kurdish regions of the northeast at Ra’s al-Ayn and Tel Abyad if Turkey would allow the regime to recover some of Idlib up to Ma’arat al-Nu`man.

Another theory is that Russia launched the campaign to punish Turkey for its plans to intervene militarily in Libya. As in Syria, Russia and Turkey back different factions in Libya. Russia supports Benghazi-based strongman Field Marshall Khalifa Hiftar, while Turkey supports the fundamentalist-tinged rump government in Tripoli.

The Syrian Arab Army and its Shiite militia auxiliaries have now taken about 320 sq km. (about 200 sq mi.) of Idlib, about 1/3 of the province. They are within striking distance of taking key cities such as Ma’arrat al-Nu`man. As it is, Ma’arrat al-Nu’man is a ghost town, after its residents largely fled the army advance. For the last two days the SAA’s progress has been slowed by rainy, foggy conditions. Fundamentalist militias such as Jabhat al-Nusra or The Syrian Conquest Council continue to put up resistance, and, indeed, claim to have retaken some villages in the east that recently fell to the Syrian forces.