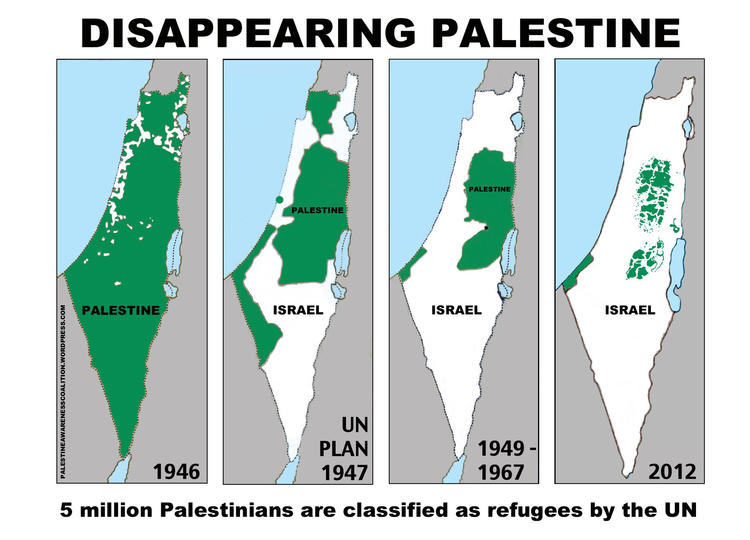 Ann Arbor (Informed Comment) – Phil Weiss at Mondoweiss, the most lucid and informed voice on the American Jewish left doing journalism critical of right wing Zionism, reports on remarks of The Atlantic editor Jeffrey Goldberg at a Jewish Community Center forum in Manhattan.

In Weiss’s telling, Goldberg argued to his audience that Israelis are like the Seminole indigenous people of Florida, and the Palestinians are “the cowboys.”

This framing of the issue is completely ahistorical and frankly ignorant, and is offensive on all sides. Goldberg apparently can’t bring himself to say the word “Palestinian,” as though all Arabic-speakers are indistinguishable.

Moreover, the modern Zionist nationalist attempt to claim Palestine for Ashkenazi European Jews is just typical Romantic nationalism of the German variety. The Ashkenazi seem to have been out there in Eastern Europe from about 800 A.D. when some Palestinian Jewish men migrated and married local women. Their women are genetically mainly Gentiles (which in Rabbinic law would make virtually all of them Gentiles). They are Poles, Russians, Ukrainians, etc. They didn’t have anything significant to do with Palestine except for occasional pilgrimages until the early twentieth century.

Goldberg wants to portray the Ashkenazi as identical to the Jews of ancient Israel. That is ridiculous. But even if we granted the premise, Malaga and other Spanish cities were founded by Phoenicians from what is now Lebanon from the 800s BC. If today’s Lebanese found a superpower sponsor to invade Spain and colonize parts of it, displacing today’s Spanish, now that would be akin to Zionism. But it would actually be more like the Brazilian Lebanese of Sao Paulo claiming Malaga because the Phoenicians founded it.

As for ancient Palestine, after the Babylonian conquest Jews most often didn’t rule it independently. The Romans didn’t even let Jews live in Jerusalem for hundreds of years after 70 AD when they destroyed the Second Temple. Very large numbers of Jews in the Levant converted to Christianity, and then after the Muslim conquests of the 630s, to Islam. That is, the present-day Palestinians are in large part descendants of ancient Jewish populations along with other Levantine peoples. To configure the 1.3 million Palestinians living in Palestine in the 1930s as Puritan settler-colonialists (“cowboys”) is bizarre and in fact intellectually evil. It replicates in the realm of history the Israeli robbery of citizenship rights from the Palestinians; now Goldberg has branded them foreigners in their own land even though their families have lived there for millennia. If Goldberg has bought into the Joan Peters hoax then he should be fired from the Atlantic immediately.

In fact all of Goldberg’s various intellectual tap dances for Zionism are intended to obscure the fate of the Palestinians, who live under Israeli military rule as stateless subjects without basic human rights. Goldberg says he supports a two-state solution, but since that option has been taken off the table by the very Israeli politicians he so vocally supports, he really only has a choice of Apartheid or a one-state solution. I’m not aware for which he has expressed his preference, given that option A now impossible (see the map above).

The Crusaders killed or expelled most remaining Jewish populations. From about 1100 until the early twentieth century there were virtually no Jews in Palestine. Oh, there were a handful here and there– a few Kabbalist mystics at Safad, retirees in Jerusalem. But I wrote a book about Napoleon Bonaparte’s invasion of the Middle East and the French report that they only found 3,000 Jews in geographic Palestine in 1799.

So the Jews’ relationship to Palestine isn’t very much like that of the Seminoles to Florida.

In fact, arguing from historical analogy for the supposed rights of colonial powers is a fallacy, as I will show below.

The European Jews were brought to Palestine by British imperial policy during the early twentieth century heyday of colonialism, and by the rise of Fascism in Europe that drove out or killed millions of Jews. Because of the complications of the Holocaust, Jewish migration into Palestine is not exactly like the voluntary settler=colonialism of the Pieds Noire in Algeria, but on the ground in the Middle East the two had very similar effects.

The invention of a useful past by a settler-colonial population is not distinctive to militant Zionists like Goldberg. All colonial endeavors claim a past to justify their dispossession of indigenous peoples.

The European colonial powers just claimed to be successor states to the Roman Empire. Since the Romans had ruled Algeria and what is now Tunisia, the French Empire of the 19th and 20th centuries configured the rapine, mass murder and grand larceny of its rule in North Africa as a “civilizing mission,” restoring the glories of Roman rule of law. So, while an objective observer might see Frenchmen from Lyons in a foreign land, expropriating indigenous Algerian land and chasing away its Arab Muslim owners to live in penury, imperial flacks saw a return of Roman centurions to their natural apex of society in Roman “Africa.”

The British also engaged in making claims to rule on the basis of being of Roman successor state. But they also appealed to the legacy of Alexander the Great. The British public and colonial administrators in India even objected to Kabul’s late nineteenth-century campaign in Kafiristan on the (false) grounds that the Afghan king was subjecting the descendants of Alexander’s army in north India. So the British were Greeks, and the Greeks had conquered some of India, so it was only natural that 15,000 British soldiers and administrators should rule contemporary India.

What is odd is that 19th century style romantic nationalism, with its brief for settler colonialism, has been abandoned as intellectually dishonest and implicated in war crimes and genocide by most contemporary intellectuals. But intelligent, educated and experienced Zionist journalists like Goldberg defiantly cling to it.

I should declare my interest, since I’m among the many that the pugilistic Goldberg has tried to smear. wrote some years ago, “More recently I have provoked the ire of a burly former Israeli military prison guard at the notorious Ketziot detention camp during the first Intifada, who is among our foremost journalists of the Middle East and given a prominent perch at The Atlantic magazine – Jeffrey Goldberg.”

Goldberg has not only not exactly been at the forefront of the peace movement, he has argued and agitated against doing anything practical to achieve this increasingly unlikely goal. He is the Rottweiler of ideologues when it comes to making sure that no Israeli policy is ever criticized by anyone without his branding the critics bigots and even genocidal. Since, as noted, Goldberg … actively served in the Israeli Army as a prison guard during the first Intifada or Palestinian uprising, I can’t understand why anyone takes him seriously when he lashes out at critics of Israeli policy. I mean, what would you expect? If an Arab-American had served in the Palestine Authority police, would anyone give him a perch at The Atlantic and routinely bring him on CNN to denounce critics of Mahmoud Abbas?