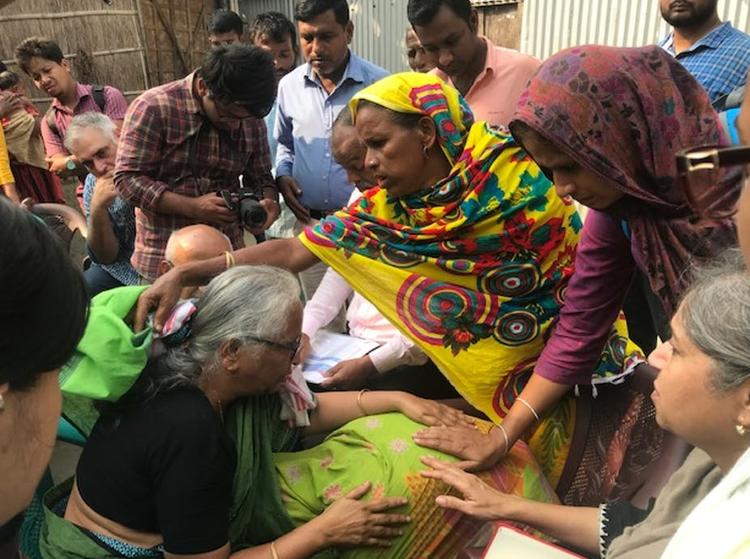 The state of Assam in India is currently burning with violent protests against a new citizenship law passed by both houses of the Indian parliament in early December.

The Citizenship Amendment Act (CAA) will ease the Indian citizenship process for undocumented migrants in India who come from Pakistan, Afghanistan and Bangladesh – but only for those who are not Muslim, undermining the promise of equality by the Indian Constitution. The international community criticised the new law, with the UN High Commissioner of Human Rights calling it “fundamentally discriminatory”.

Since its parliamentary approval on December 12, the law has triggered massive protests across India including in the capital Delhi.

Assam is directly affected by the new law. It significantly undermines the National Register of Citizens (NRC), a listing process that has been underway in Assam since 2015 through which residents have to prove their claim to citizenship based on documentary evidence. The NRC is designed to update a first list conducted as an all-India exercise in 1951 to combat illegal immigration flows, primarily from neighbouring Bangladesh.

More than 1.9 million people in Assam – many of whom are Muslim – have failed to make it onto the NRC’s final list which was published on August 31. They now face the risk of statelessness. But at the same time, the large numbers of Hindus who were excluded in the NRC system can now become Indian citizens under the CAA.

The way the CAA is written makes way for Indian citizenship of all non-Muslims who lived in certain areas of Assam, such as the Brahmaputra Valley, before or on December 31 2014, even if they don’t have documentary evidence, and while rendering Muslims stateless. It contradicts the cut-off date for inclusion used by the NRC, which was midnight on March 24 1971.

For the protesters on Assam’s streets, the CAA gives legal rights to the large numbers of undocumented Bengali-speaking Hindus who have migrated from Bangladesh since 1971 and also those currently excluded by the NRC.

A journey to the Pampara Char

I’ve seen up close the damage the NRC process has had on communities in Assam. In mid-November, I visited the state with the Indian peace activist Harsh Mandar and several others as part of an initiative called Karwan e Mohabbat, a human caravan of peace, justice, solidarity and consciousness as part of my research on citizenship in the Indian borderlands.

We visited the homes of people who have been excluded from the NRC, particularly from the Muslim community in Lower Assam districts. We listened and learned about their experiences of trauma, suffering and hopelessness with the filing of their documents and how they are coping with their exclusion.

Among the people we met in the Barpeta district of Lower Assam were inhabitants of the Chars, low-lying temporary sand islands formed by silt deposition and erosion. These sand bars, which emerge and submerge in the river beds of Assam’s Brahmaputra river, are uniquely vulnerable to disasters such as floods and cyclones.

The Pampara Char is a barren wasteland, with wild grass growing all over the place and houses that looked like temporary huts. The only brick building, which was freshly painted in white and blue, was the primary school. It stood distinct from the other houses and seemed sparingly used. The people, toughened by poverty and harsh ecology, were left distraught by their experience of the NRC and gathered around Harsh Mandar and other social activists to share their suffering and tales of horror about the registration process. Many had to go through repeated verification across different drafts of the list.

I observed deep anxiety among the people we met, such as the aggrieved 54-year-old Khaled Ali. Illiterate and landless, Ali is a river fisherman who sometimes also works as a daily wage labourer. Like many others he received a notice in early August that he and his 18 other family members needed to submit more documents or they would be excluded from the final NRC list. Their names had been included in two previous versions.

A reverification hearing was scheduled for the next day in the distant town of Golaghat, which is 460km away from the Pamapara Char. Overnight, Ali raised a loan of 30,000 Indian rupees (US$424 or €383) to travel to Golaghat, with all his family members and two witnesses in a hired bus. After an 18-hour trip, they reached Golaghat and were received by local civil society activists who arranged for them to camp at a community centre and also helped them to submit their documents.

After their reverification hearing, Ali and his family members found themselves excluded in the final NRC list. While they have 120 days to appeal against their exclusion, his wife lamented that they lack the money to produce more documents from paralegals to support their cases before the appeal deadline on December 29. Meanwhile, a distraught Ali told us that he still has a loan of 14,000 rupees (US$198 or €178) to repay.

For marginal and illiterate residents of the Chars such as Ali, the NRC and the process of proving citizenship has become a very stressful and expensive burden. As we found out during our home visits, a new parallel economy of document production has flourished. Paralegals charged anywhere between 500 to 1,000 Rupees for each document, a very large sum for these poor people.

The highly complex documentation process, which includes requirement for family trees and residency documents dating back to before March 24 1971, is also to blame for the exclusion of large numbers of people from the final NRC register. The process is extremely insensitive to the difficulties of the large mass of illiterate and poverty-stricken populations who are finding it very difficult to make sense of how to navigate registration on their own.

Processes of verification and reverification have been implemented in a way that firmly establish a hierarchical relation between the state and its citizens, with the complete domination by bureaucrats and public office holders over the rights of the citizens and residents.

Many of the marginalised populations in Lower Assam, such as Ali and his family, have needed constant support to be able to file their documents and fight their cases.

Local activists are playing a significant role in helping people deal with the burden of proving their citizenship, understanding the terminology and filling in the application forms and claims. They are also offering guidance about attending case hearings, support in procuring documents for submission from paralegals and also offering psycho-social counselling.

Volunteers and human rights groups of Lower Assam have also connected with civil society actors in Upper Assam to help residents commute from Lower to Upper Assam for hearings and verification, and on some occasion even raise money, creating a solidarity network.

Such a humanitarian network is crucial at a time when marginalised people feel threatened with the changing legal regime which seeks to redefine the basis of Indian citizenship. These networks of solidarity in India’s north-eastern borderlands attempt to draw out the real Indian body politic, reinforcing the plural fabric of the Indian constitution.

* Some names in this article have been changed to protect the anonymity of the participants.