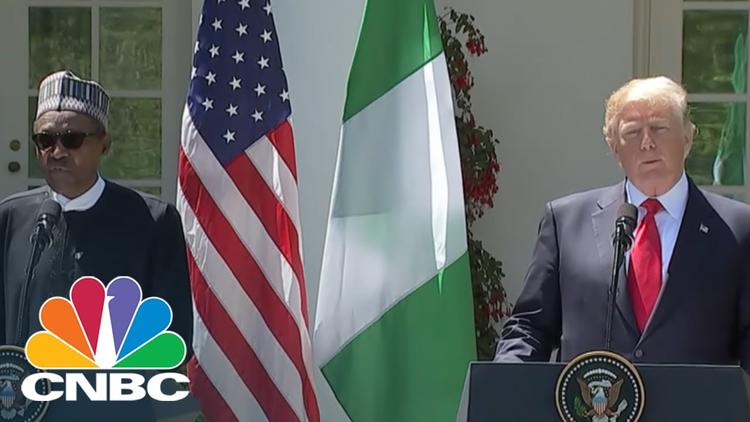 Ann Arbor (Informed Comment) – Nicole Narea at Vox reports that Trump is considering adding some of Africa’s most important countries to his visa ban, in a transparent attempt to reduce African immigration to the United States. What is it about Africans, you might wonder that bothers Trump?

Yomi Kazeem at Quartz adds that Trump confirmed his plans at the sidelines of the Davos Conference. He speculates that Trump may not institute a full ban on the newly added countries but rather target individuals for sanctions, a step that would put all applicants from those countries under extra scrutiny. (This is how he handled Venezuela before.)

The choice of Sudan is bizarre. The Sudanese people spent the past year risking their lives to come into the streets to overthrow dictator Omar al-Bashir, who had been charged with crimes against humanity by the International Criminal Court. The Sudanese people forced Bashir out, and he is now jailed on charges of corruption and may be sent to the Hague for a war crimes trial. The Sudanese protesters then negotiated hard with the officer corps for a civilian democracy, and got a commitment to its implementation in 3 years after an initial cohabitation of civilian and military rule. Caretaker Prime Minister Abdallah Hamdok is charged with carrying out this plan and the US government pledged on November 15 to help carry it out. Security has already much improved in most of the country. With al-Bashir deposed, there is no longer any reason for Sudan to be under any sort of sanction or ban.

So Trump is going to reward a country whose people risked everything to move it toward democracy by putting it under a visa ban? Sudan is Africa’s 8th largest country, with a population of 40 million — i.e. it is the size of California. It is 17th of 54 African countries for nominal gross domestic product, at $31 billion. The country was a founding member of the African Union, and the AU has strictly supported the popular movement toward democracy.

To put Nigeria under a ban is likewise a stinging slap in the face to Africa. It is the richest and most populous country in Africa, with a population of 200 million, and a nominal GDP of $444 bn. (on the same order as Austria, Norway and Argentina).

The US military helps train the Nigerian army, and the two countries have a warm collaboration in anti-terrorism operations. The Nigerian government has made strides in confronting the Boko Haram terrorist movement. In any case, most of the country is secure. Nigeria is a multicultural society, about 50/50 Christian and Muslim. It is a cultural, political and economic leader in Africa. Putting it under a visa ban will be seen as a knock on Africans in general.

Nigeria has regular elections, and its 2015 polls are considered by Freedom House to have been credible and above-board at both the presidential and provincial levels. Nigeria has 5 out of 7 rating from Freedom House for civil liberties.

Tanzania is Africa’s fifth most populous country, with 51 million citizens. It is tenth in the continent for GDP, at $61 billion. It has been a major leader on the continent. I can’t think of any security issue that would make its citizens dangerous to the US. It is about 40 percent Muslim, though there isn’t a census.

The inclusion of these countries in the visa ban largely departs from the Supreme Court decision that the president can ban people only on grounds that they are dangerous.

In 1924, America at the height of a white nationalist frenzy, enacted a racist immigration act that excluded Asians entirely and assigned immigration spots on the basis of the proportion of the country that was from that nation in 1880. This law favored northern Europeans and excluded Africans. The law was so racist that it was admired by and influenced the Nazis. It was replaced in 1965 after the civil rights movement because people were embarrassed by it.

We’re back to the spirit of 1924, courtesy the white nationalist regime of Trump.

Trump’s initial attempts at a visa ban were struck down as discriminatory, but his version 3.0 passed muster with the Roberts court (the same court that unleashed the Deep South to again engage in large-scale voter suppression among their African-American population, mainly with voter i.d. and other onerous requirements hurting poorer voters). The current visa ban includes Iran, Libya, Somalia, Syria, Yemen, Venezuela, and North Korea. But in the case of Venezuela and North Korea, only some officials are banned.