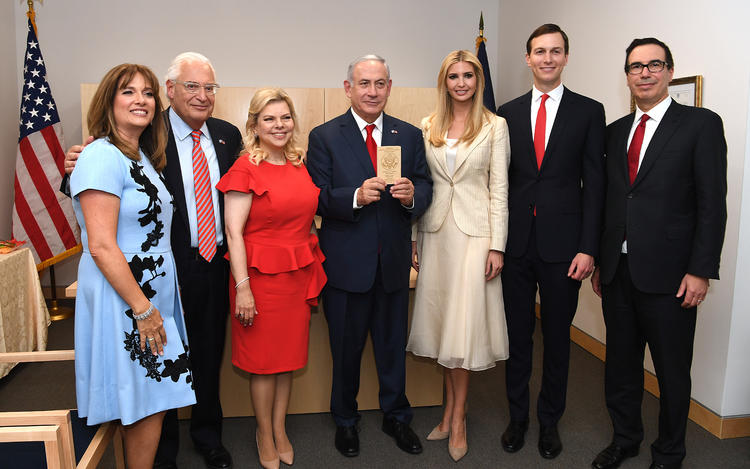 Ann Arbor (Informed Comment) – Jared Kushner is essentially an Israeli squatter on Palestinian land in the West Bank, and so it is little wonder that his plan for Palestinians is that they should continue under the Israeli jackboot and that a third of their territory in the West Bank should be given to Israel. The arrogance of this filthy rich privileged Jewish American dismissing dispossessed and disprivileged Palestinians as dumb as rocks for not bending over for him on command is breathtaking.

The United States is a big, powerful, wealthy country and Kushner’s conviction that he can screw over with impunity the poor, surrounded, disorganized Palestinians seems logical.

The fact is, however, that even Great Powers pay a price for doing profound injustices, even if it isn’t immediately obvious how.

Because the Israeli Occupation of the West Bank and Gaza is a subject attended with a great deal of noise and propaganda, it is easy to be misunderstood and smeared. So let me state straightforwardly that I am not saying that US support for Israel per se has harmed our nation. I am saying that US support for the Israeli Apartheid policies toward the Occupied Territories since 1967 has been injurious. Here are some of the ways this backing for naked injustice has injured us:

1. Terrorism: The US support for the Israeli ownership of all of Jerusalem injures the religious feelings of 1.8 billion Muslims and it breeds terrorism against the US. It helped get Washington and New York blown up in 2001. I wrote 15 years ago,

“Because al-Qaeda and its fellow travelers do not speak in the language of Palestinian nationalism, it has been possible for certain quarters to obscure to the US public that they are absolutely manically fixated on the Israeli occupation of Jerusalem.

‘ Third, if the Americans’ aims behind these wars are religious and economic, the aim is also to serve the Jews’ petty state and divert attention from its occupation of Jerusalem and murder of Muslims there. The best proof of this is their eagerness to destroy Iraq, the strongest neighboring Arab state, and their endeavor to fragment all the states of the region such as Iraq, Saudi Arabia, Egypt, and Sudan into paper statelets and through their disunion and weakness to guarantee Israel’s survival and the continuation of the brutal crusade occupation of the Peninsula. ‘

How obsessed Bin Laden & company are with what goes on in Palestine is obvious… in the 9/11 commission report:

‘ According to KSM [Khalid Shaikh Muhammad], Bin Ladin had been urging him to advance the date of the attacks. In 2000, for instance, KSM remembers Bin Ladin pushing him to launch the attacks amid the controversy after then-Israeli opposition party leader Ariel Sharon’s visit to the Temple Mount in Jerusalem. KSM claims Bin Ladin told him it would be enough for the hijackers simply to down planes rather than crash them into specific targets. KSM says he resisted the pressure.

KSM claims to have faced similar pressure twice more in 2001.According to him, Bin Ladin wanted the operation carried out on May 12, 2001, seven months to the day after the Cole bombing. KSM adds that the 9/11 attacks had originally been envisioned for May 2001. The second time he was urged to launch the attacks early was in June or July 2001, supposedly after Bin Ladin learned from the media that Sharon would be visiting the White House. On both occasions KSM resisted, asserting that the hijacking teams were not ready. Bin Ladin pressed particularly strongly for the latter date in two letters stressing the need to attack early.The second letter reportedly was delivered by Bin Ladin’s son-in-law,Aws al Madani. ‘ “

It wasn’t just that the 9/11 attacks killed nearly 3,000 Americans, it was that they launched the US on two wars (both still going on) and vastly securitized and miltarized American society, paving the way for Trumpian fascism. How deeply America has been harmed, and how many liberties and economic opportunities it has lost for the sake of millenarian dreams of Jerusalem by Christian Zionists and Jewish Zionists are incalculable.

2. Opposition. When two people meet, they can hit it off or they can get off on a wrong foot. It is the same with countries. The United States has gotten off on a wrong foot with many of the 1.8 billion Muslims because it supports treating the Palestinians the way white people in the Old South used to treat Black people.

The degree to which Iraqis were influenced to oppose the US presence in their country in the Bush era by US policy of screwing over the Palestinians has usually been overlooked. I wrote at Salon in 2004,

“Sharon wanted to permanently annex about half of the West Bank, and appears to have decided that this action might be made palatable to the U.S. and some European states if he, at the same time, withdrew from Gaza altogether . . .At their joint news conference on April 14, Bush blessed Sharon’s plot. Of the “existing major Israeli population centers,” (i.e. settlements) on the West Bank, Bush said it is “unrealistic to expect that the outcome of final-status negotiations will be a full and complete return to the armistice lines of 1949.” Bush also hailed Sharon’s plan to withdraw from Gaza and move its settlers to the West Bank as “historic.”

Translated, what Bush really said was that there would be no return to the 1967 borders and that Israel’s policy of annexing occupied territory and planting large settlements on it — actions forbidden by the Hague Regulations of 1907 and the Geneva Convention of 1949, which forbid permanently acquiring territory by war — had now received the stamp of approval from Washington. Moreover, Sharon was authorized to take further steps unilaterally, without negotiating with the Palestinians.

Combined with the American military assault on Fallujah, Bush’s embrace of Sharon’s position succeeded in making America, in Arab eyes, virtually indistinguishable from Israel. The Egyptian daily al-Jumhuriyyah spoke for many Arabs when it observed in the wake of the Bush-Sharon accord, “the victims being killed daily in Palestine and Iraq are due to the continuation of the occupation … Violence and extremism have increased as a natural response to the brutality of the occupation.”

Before Bush endorsed Sharon’s plan, much of the Arab press and popular opinion had stopped short of such an equation. Many, even those opposed to the U.S. invasion and critical of the occupation, were prepared to acknowledge that not all of those fighting the Americans were noble freedom fighters. Now, the rhetoric and sentiment are swinging the other way.

Sharon’s plan for West Bank annexation and withdrawal from Gaza had held one danger. Hamas, strong in Gaza, might take advantage of an Israeli withdrawal to use the territory as a base for even more suicide bombings. Sharon was determined to wipe out the Hamas leadership so as to cripple its organizational capacity and render it unable or fearful to benefit from a unilateral Israeli pull-back. Thus he launched the rocket attack on Sheikh Yassin on March 22, which was a piece of political theater. A half-blind man in a wheelchair could simply have been arrested (in fact, Yassin served time in an Israeli prison in the 1990s). The point was to inspire fear among his successors.

Hamas is a Sunni Muslim fundamentalist party, deriving from the Egyptian Muslim brotherhood. Sheikh Yassin’s extremist writings are widely read among fundamentalists, including those in Iraq. His murder provoked outrage among both Sunni and Shiite Iraqis. Some of them determined to take revenge on the closest ally of the Israelis, the Americans who were occupying them.

The fuse ran from Gaza to Iraq, and ignited in Fallujah. Sunni Arab fundamentalists and Arab nationalists are particularly strong in al-Anbar Province, the site of the notorious centers of opposition to American rule such as Fallujah, Ramadi, and Habbaniyah. Fallujah in particular has many Islamists close in their thinking to Hamas. The group that killed the four American civilian security guards in Sunni Arab Fallujah on March 31 identified itself as “Phalanges of Sheikh Ahmed Yassin,” calling the grisly killings a “gift to the Palestinian people.”

American military forces immediately began closing on the city, seeking revenge. Although the link was virtually unreported in the Western press, the ghost of the man in the wheelchair had cast a long shadow over the American occupation of Iraq — one that would grow longer.

Then, on April 2, the radical young Shiite cleric Muqtada al-Sadr announced in his Friday prayer sermon in the southern Shiite city of Kufa that he should be considered the “striking arm” of Hamas “because the fate of Iraq and Palestine is the same.” On April 3, the Coalition Provisional Authority issued 28 arrest warrants for associates of al-Sadr, and took 13 of them into custody, including Sheikh Mustafa Yaqubi, his representative in Najaf. The pretext for the arrests was a year-old murder, and the warrants were themselves several months old. It is probable that the decision to act was taken in the light of al-Sadr’s April 2 sermon, by Bush administration officials who feared his movement posed a threat to Israel.”

3. War footing. Had the United States held Israel’s feet to the fire and insisted on implementing the Oslo Accords, there would have been a small Palestinian state in 1997 and the entire Israel-Palestinian issue would have been defused. Instead, the wound has gotten redder and deeper and inflamed passions. The Steadfastness Front of countries opposed to the United States mostly had nothing against the US per se, they were angered by the ongoing ethnic cleansing and Apartheid policies toward the Palestinians. Those apologists for the fascist Likud Party who say that Arab support for the Palestinians is insincere have never met an Arab. But ironically they are also admitting that Israeli policies have given cynical politicians pretexts for anti-Americanism.

The US problem with Hizbullah in Lebanon grew out of the Israeli Occupation not only of the Palestinians but also of 10 percent of Lebanon.

The US problem with Iran is driven in part by the Palestine issue. It could turn into a big war.

The US is in Syria still mostly to try to block Iran.

The West Bank colonization project of right wing Jewish nationalism brings in its train conflicts for the United States. Trump’s recent whacking of Iranian Gen. Qasem Soleimani and of the leader of the Iraqi militia, Kata’ib Hizbullah, was in part for the protection of the Likud Party from the backlash its West Bank policies have created in the region.

If there had been an Oslo-style Palestine, its president could just come out and tell Iran and Hizbullah and the Iraqi Shiite militias to stay out of Palestinians’ business. But the ongoing human rights catastrophe, which Kushner attempts to paper over and tries to blame on what he alleges is the stupidity of the Palestinians, provokes rage and provides grounds for political mobilization in the region.