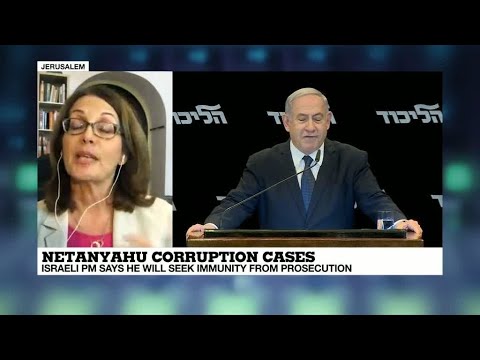 Even though he has lost two general elections and been indicted for corruption, bribery and breach of trust; Israeli PM Benjamin Netanyahu still clings to power as a way to claim immunity from his crimes. But while Republicans in America maintain their unanimous, unqualified support for President Donald Trump; Likud voters in Israel show signs of skepticism, as the leadership remains totally invested in Bibi.

Trump’s support is unwavering among Republican voters, but there are cracks Likud’s solidarity, evidenced by the loss of seven Knesset seats from the April to September elections. That means about a quarter-million people disembarked from the Bibi train. They’ve grown tired of the strategy to seek legislative immunity for as long as he stays in office, recognizing this as a selfish survival mechanism, NOT in the interest of the country.

The Likud Party leadership recently reaffirmed its undying support for Bibi in a primary election over challenger MK Gideon Saar. 25 of the 32 Likud Knesset members ganged up on Saar to support Bibi. As with Trump in America, some Likudniks support him out of obligation (fear), some out of habit and others out of ambition. Likud is full of politicians who want to supplant Bibi, and none of them are willing to defer to Saar over themselves.

The carousel of inconclusive Knesset elections has become Bibi’s best defense against prosecution – he didn’t win two recent elections, and enjoys immunity as long as he remains PM. Now he’s presented a formal request for immunity to the Knesset, in a tortured misapplication of a tool intended for legislative protection from executive power abuse. His proposed bill to allow the Knesset to override Supreme Court decisions pushed some over the edge. Trump threatens the Constitutional balance and separation of powers with similar motivations.

The comparisons of Trump and Bibi might seem tiresome until one recognizes the remarkably common patterns of corruption and demagoguery, which have dramatic and frightening global implications. Both men are in deep trouble – Trump was impeached in the House and faces an eventual Senate trial (in some form), while Bibi faces multiple indictments. Both men are being as resourceful as possible to claim immunity and escape accountability. Though neither has been convicted, both men act like common criminals on the run, as opposed to high class criminals such as Richard Nixon, who preserved a thread of dignity by resigning.

Bibi has upped the ante with this attempt at “extra-legislative immunity,” while Trump has employed the “Wag the Dog” strategy with assassination of Iranian Maj. Gen Quassim Soleimani. Thoughtful Americans are hopeful that this was not the 21st Century assassination of Archduke Ferdinand in Sarajevo, which led to World War I. This act of war was political grandstanding at his worst, particularly after he accused former President Barack Obama of considering a war with Iran as an electoral tool in 2011.

Trump’s decision is an attempt to divert the country’s attention from the impeachment process. This reckless act was done over the objections of his military advisers, who presented that as an outrageous option to make other ones look better. Memo to the generals: his thinking isn’t that nuanced! Trump made the decision before playing a round of golf, and before jetting off to a demagogic rally to bask in the admiration of his Evangelical supplicants.

Both men distort the boundaries and functions of government to argue their claims, and have created separate Constitutional crises for their nations. Both would fail a HS civics test in their respective education systems, for their bizarre misapplications and re-interpretations of legal canon and government functions. Bibi’s only course of action last week was to seek parliamentary immunity in a letter to Knesset Speaker Yuli Edelson.

But immunity for Bibi is only a delay tactic, and does not play well to the base. As Ha’aretz columnist Yossi Vetter noted, “It conveys a sense of guilt, fear and attempt to hide behind technicalities; it constitutes a slap in the face at the legislature that passed it into law for exactly the opposite purpose for which Netanyahu is seeking to exploit it.”

The Likud and Republican parties are both enablers and collaborators in their leaders’ criminal acts. But while some Likud MK’s display a politician’s natural inclination for self-promotion, the Trump dynamic has subsumed the ambitions of most Republicans. I half-expected Rep. Kevin McCarthy to use the impeachment hearings as a springboard for his own ambitions. He could have made a real name for himself, and gained immediate cross-over appeal as a 2020 Presidential candidate by declaring, “I can no longer defend the unconscionable, treasonous actions of this Soviet plant in the White House, and I’m running against him!” But t-Rump has subsumed even their own selfish political ambitions.

Both have shown a willingness to destroy the foundations of their governments for the purpose of staying in power, including undermining law enforcement and attacking Constitutional boundaries. The depths of Bibi’s Reaganesque-Trumpian doublespeak occurred when Bibi proclaimed that “Immunity is a cornerstone of democracy.” No, rather; it’s an act of desperation, on the part of both men. Trump’s claim to have acted on U.S. Intelligence seems perverse after he has repeatedly defamed and undermined the leadership of the American agencies. But that assassination option presented by “his” generals was too much to pass up. Trump has squandered an effective working agreement to keep Iran’s nuclear ambitions in check. And he killed one of the most incompetent military leaders in the world https://www.nytimes.com/2020/01/03/opinion/iran-general-soleimani.html, while provoking a gratuitous conflict with no strategy or end-game, other than riling up his base.