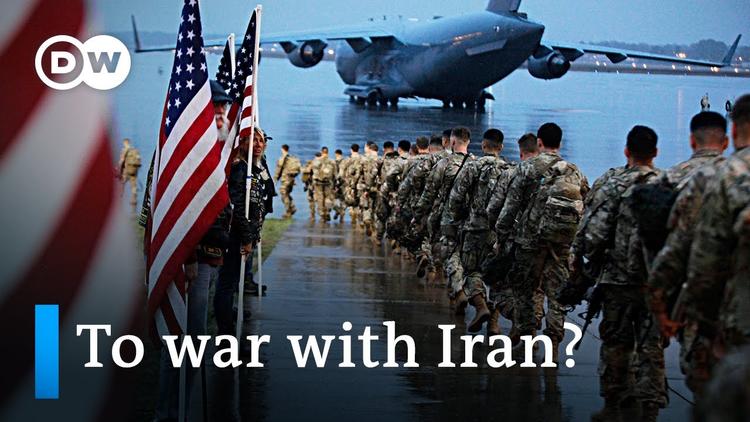 Chicago (Special to Informed Comment) – With the drone missile assassination of Iranian Gen. Qassem Soleimani, President Trump launched a reckless criminal act of state terror designed to provoke a war. Iran de-escalated the situation as of Wednesday — refusing to engage in a retaliatory cycle of violent escalation while demonstrating their military capability. Trump responded with a rambling, lifeless, incoherent slurred speech that promised to ratchet up economic sanctions without threatening further violence.

However, Trump’s stepping back from the precipice of a hot war with Iran does not obliterate his history of chest-thumpng war mongering and his repeated commitment to war crimes. Following Soleimani’s murder, Trump threatened to attack Iranian sites of cultural significance, tweeting: “the US has targeted 52 Iranian sites . . . some at a very high level & important to Iranian culture.” This is a war crime. The Hague Convention for the Protection of Cultural Property and the Geneva Conventions prohibit acts of hostility directed against historic monuments, works of art or places of worship which constitute people’s cultural or spiritual heritage. “Trump’s threat to attack Iran’s cultural heritage shows his callous disregard for the global rule of law,” said Andrea Prasow, acting Washington director at Human Rights Watch.

Prasow’s assertion is bolstered by Trump’s violent actions throughout the world and reflect his administration’s broader disregard for human rights and civilian lives in Iran and elsewhere. The United Nations mission in Afghanistan reported recently that U.S. airstrikes and Afghan security forces killed more civilians in the first half of 2019 than the Taliban did, according to the Los Angeles Times. In Syria and Iraq, Airwars — an independent group monitoring civilian casualties — says that between 8,000 and 13,000 noncombatants were killed in the war against the Islamic state, with the biggest increase during Trump’s administration.

In Yemen, where U.S. – equipped Saudi Arabia bombs insurgents, the U.N. says almost 20,000 civilians have been killed. Last September, a U.N. panel warned that the United States may be complicit in war crimes that not only includes indiscriminate bombing and shelling, but also torture, sexual and gender-based violence.

Throughout his presidency and even prior to his election, Trump has repeatedly supported potential atrocities and expressed enthusiasm for war crimes. During a Republican debate in 2016, Trump said he “would bring back waterboarding,” adding that he would also “bring back a hell of a lot worse than waterboarding” — a violation of the Geneva Conventions prohibition against torture. Trump also argued during the GOP primaries that he wanted to torture suspected terrorists even “if it doesn’t work” in producing valuable intelligence, because “they deserve it anyway.” He further vowed, on Fox and Friends: “When you get terrorists, you have to take out their families.” A deliberate attack on a civilian or a non-combatant must be regarded as a war crime.

Once in office, Trump acted in support of accused war criminals, intervening in their cases in defiance of military leaders’ wishes, and dismissing charges against Americans accused of deadly brutality. In four separate cases since the beginning of his presidency, and for the first time in the history of modern warfare, an American president has pardoned service members accused or convicted of war crimes. On Twitter, Trump complained, “We train our boys to be killing machines, then prosecute them when they kill!” Making no distinction between killing combatants and killing the innocent, this philosophy demonstrates that the Commander-in-Chief recognizes no legal restraints and runs a gangster administration that celebrates war crimes.