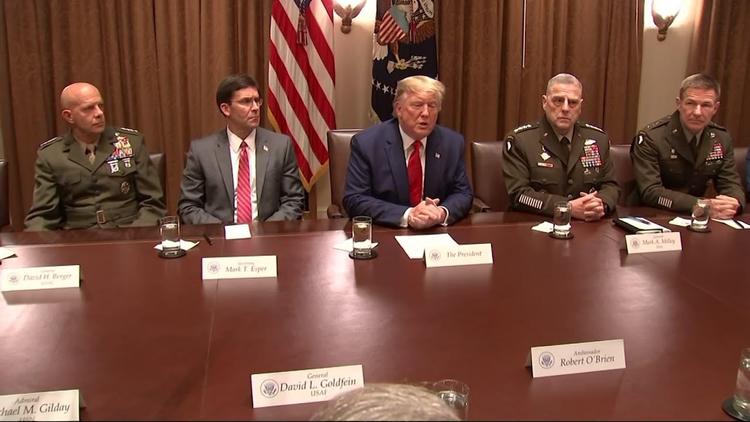 Sacramento, Ca. (Special to Informed Comment) – The leaders of Iran, Ayatollah Khamenei, and the United States, President Donald Trump, share an identical strategic aim: ending the US’s military presence in the Middle East. I cannot recall any other conflict where the antagonists fully agree on a specific end goal. This fact alone makes the US-Iran conflict nonconforming to the typical inter-state conflicts where competing aims of the antagonists drive the conflict. It also suggests that the root of this conflict resides less in the grand strategies of each nation than in the tactics they choose to accomplish their shared goal.

For Iran, pushing the US military out of the Middle East has remained a central aim of the Islamic Republic since the 1979 Revolution. For the US, however, the strategic decoupling from the ME began towards the end of President Obama’s first term in 2011 when the “Pivot to Asia” strategy was announced. It called for a rebalancing of US global reach away from the Middle East and its endless wars (Iraq and Afghanistan) toward Asia-Pacific.

To pursue this new strategy, Obama faced one daunting challenge: preventing a nuclear-armed Iran before the US military would leave the region. During his second term, Obama’s major diplomatic efforts were expended on negotiating the nuclear agreement (JCPOA) between Iran and the five permeant members of the UN Security Council plus Germany (5 +1). The agreement was unanimously adopted by the UN Security Council in July 2015.

By the end of his last term, Obama felt reasonably confident that Iran would abide by the terms of JCPOA and thus opens the way for rebalancing the US’s forces toward Asia and the Pacific. Enter President Trump. Not unlike Obama, throughout his campaign and during his first term, Trump has repeatedly stated that the Middle East and its oil are no longer strategically vital to the United States and his aim is to end America’s endless wars and pull American military out of the region. But for Trump, the main obstacle for decoupling militarily from the Middle East was the JCPOA. He despises the nuclear deal for one major reason: It was an “Obama’s deal.”

Trump is obsessed with Obama. His modus operandi in both domestic and foreign affairs has been to undo or reverse as many Obama era policies as he possibly can. The impulsive president lacks the conation, the patience, and the acumen to properly understand the JCPOA. No compelling reason can adequately explain the revulsion he repeatedly expresses about the Iran nuclear deal (“the worst deal ever”) other than the fact that deal is widely regarded as a crowning diplomatic achievement of Obama. What Trump wants, as he has often told Iran, is a new nuclear deal that he could negotiate himself and take full credit for it. But if Trump-Kim nuclear negotiations portend what to expect, a new nuclear deal with Iran is a pipe-dream, at least during Trump’s remaining term.

So, here we are, at the brink of war, even though the leaders of both countries have an identical strategic goal—withdrawal of the American military from the region! What then fuels this unique conflict? It is the tactics each country employs to pursue the same strategic goal. Iran has to learn that the surest way to delay America’s military exodus from the region is by trying to humiliate the US. Such acts invariably would lead to a surge in American nationalism, reduces the decisional latitude of the president, and pushes the US to respond disproportionally and more lethally. The fact that Iran’s retaliation for the fervid killing of a highly popular Iranian general was carefully calibrated to avoid American casualties offers some hope.

The situation in the US is more complex, vastly different from that of Iran, but hardly comforting. Virtually every major national security/foreign policy advisor of President Trump, not only does not share his strategic goal in the ME but, almost to the person, they push for America’s military presence in the ME for the long-haul. Their outlook toward the ME has been irremediably shaped by the 9/11 attack and the Global War on Terror. They see the US’s unrivaled military might as the primary instrument for advancing US policies in the region and beyond. They also regard diplomacy mostly as a handmaiden of military force. For these individuals, the US’s military withdrawal from the Middle East spells disaster.

The two most notorious figures in Trump’s team are John Bolton, the former national security advisor, and Michael Pompeo, the current secretary of state. Unless Iran cries uncle, both would push to defeat Iran militarily. It was Pompeo’s constant prodding that led Trump to pull out of the JCPOA and assassinate Soleimani.

Clearly, we have a problem. President Trump wants to end the US’s military presence in the region, while his Secretary of State is doing his utmost to provoke a war with Iran and keep the American forces pinned down in the region! In the aftermath of Soleimani’s killing, even though the President declared that our energy independence has “changed our strategic priorities” because “we do not need Middle East oil,” Pompeo rebuffed the request by Iraq’s Prime Minister to discuss US troop withdrawal from Iraq. Can anyone recall a situation when the President and his hand-picked foreign policy team were pursuing opposite strategic goals simultaneously? Failing to see this gross contradiction brings to mind Hans Christian Andersen’s story of the courtiers who fail to see that the emperor has no clothes!
.

AP from last fall: “Trump doubles down on decision to withdraw troops”