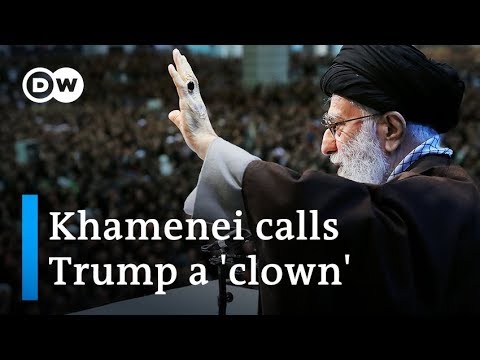 Ann Arbor (Informed Comment) – Trump on Friday warned Iran’s clerical Leader, Ayatollah Ali Khamenei to be “careful with his words” after the ayatollah gave a fiery sermon against the US and Europe on Friday in Tehran. Trump urged Iran to give up “terrorism’ and to “make Iran great again.”

Khamenei, Iran’s “August Leader” gave the Friday prayers sermon to a massive crowd in Tehran for the first time since 2012, seizing an opportunity to capitalize on the outpouring of grief that drove millions of mourning Iranians to the streets in the wake of the January 4 Trump assassination of Gen. Qasem Soleimani. He probably also hoped to shore back up some of the support the government lost when it shot down a civilian airliner and lied about it, having mistaken it for an incoming, threatening American aircraft.

Indeed, Khamenei expressed his regret for the “bitter” incident, but went on to accuse the US and Britain of doing propaganda so as to have the accidental shoot-down overshadow the fact that millions of Iranians had come out to mourn Soleimani.

Khamenei took as his scripture passage for the sermon Qur’an 14:5-6,

“And We sent Moses with Our signs–
‘Bring forth thy people
from the shadows to the light
and remind thou them of the Days of God.’
Surely in that are signs for every man,
enduring, faithful.” (Arberry).

The passage reminds believers of how God delivered the Hebrews from the persecution of Pharaoh in Egypt.

That is, the Islamic Republic of Iran is the Holy Land, the Iranian Shiite faithful are the new people of God, and Donald J. Trump is Pharaoh.

For pious Shiites, Khamenei implied, these are the “Days of God,” the days of deliverance from Pharaoh’s tyranny and the days of entry into the Promised Land.

Khamenei praised the slain Gen. Soleimani and the Jerusalem Brigades of the Iranian Revolutionary Guards Corps that he led as having been Iran’s most effective force in defending the homeland from foreign threats.

Khamenei boasted of the Iranian ballistic missile attack on Iraqi bases that housed US troops, saying that it was more evidence that we are in the Days of God. He referred to the US forces as “terrorists.” (The US has branded the Iranian national guard, the Revolutionary Guards Corps, a terrorist organization, even though it is a state organ; Khamenei thinks turnabout is fair play). He went on to charge, outrageously, that the United States created and fostered ISIL (ISIS, Daesh) in order to sow insecurity on Iran’s frontiers and in its cities. ISIL carried out two attacks in Iran in June of 2017, killing at least 12 people.

The US did not deliberately create ISIL, a hyper-Sunni terrorist group that massacred Shiites and sought to create a new Muslim state. ISIL did develop in response to the 2003-2011 US military occupation of Iraq.

Many Iranians lionized Soleimani as having been their protector from ISIL, and there is some truth to their conviction that he played that role, especially in Iraq. But so too did the US army fight ISIL in Iraq from 2014 forward, which Khamenei not only does not mention, he seems to deny it entirely.

Khamenei thus implied that Trump had Soleimani whacked in order to strengthen ISIL and remove an obstacle to it terrorizing Iran.

The Iranian leader lambasted Europe as treacherous and cowardly for toeing the Trump line in threatening sanctions on Iran.

Khamenei made fun of Trump (whom he did not mention by name) for saying that he wished the Iranian people well. He said that the United States had never been in the corner of the Iranians, and if it ever was, it was only to get close enough to plunge a poisoned dagger into the heart of the Iranian nation. Trump has imposed an extremely severe economic blockade on Iran that is hurting ordinary Iranians and even making it difficult for them to buy needed medicine.