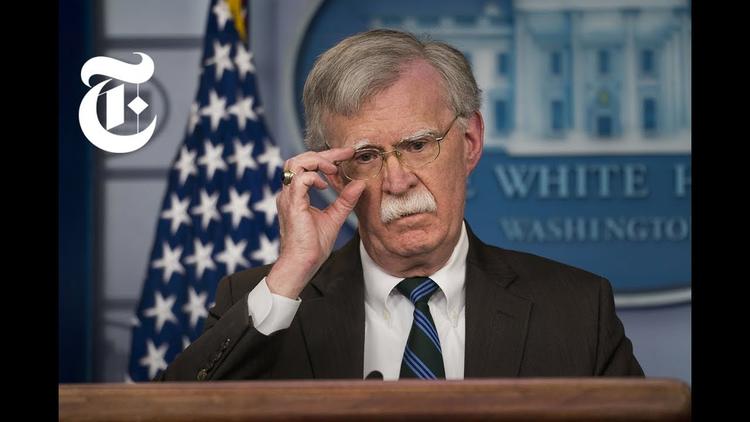 Ann Arbor (Informed Comment) – Former National Security Adviser John Bolton may have singlehandedly stopped Senate majority Mitch McConnell from simply acquitting Trump in the Senate impeachment trial and adjourning without witnesses or documents. Bolton publicly announced his willingness to testify before the Senate, after having stiffed the House proceedings. And then a manuscript of his forthcoming memoir of his time in the White House mysteriously showed up in the hands of New York Times reporters on the eve of the Senate vote on calling witnesses (Bolton denies leaking the text but says it has been with the NSC since late December).

Noah Weiland of the New York Times reported Jan. 26 that “During a conversation in August with Mr. Trump, Mr. Bolton mentioned his concern over the delay of the $391 million in congressionally appropriated assistance to Ukraine as a deadline neared to send the money. Mr. Trump replied that he preferred sending no assistance to Ukraine until officials had turned over all materials they had about the Russia investigation related to Mr. Biden and supporters of Hillary Clinton in Ukraine.” (These are crazy conspiracy theories Trump has bought into).

Since the Republican defense of Trump had derided the House witnesses as not insiders and insisted that there was no evidence that Trump squeezed Ukraine for his personal gain, Bolton blew a gaping hole in their entire defense case.

So the question is, what are Bolton’s motivations in all this?

He is not a principled person, as some believe, just a very conservative man. He is in his own way as much of an erratic maniac as Trump himself. I wrote last May,

“Bolton is a sadistic bully who wants to dominate people. He never got to be more than temporary UN ambassador under George W. Bush because he had mercilessly tortured his office staff. Bolton likes to hurt people who are weaker than he. He is not after Iran because he is afraid of it. He is after it because it is one of the last countries in the world still bucking the US power architecture and which is too weak to resist an all-out assault. He wants to see flies walking on the Iranians’ eyeballs and wants even their dogs to be f–ked.

Back in 2005 when Bush tried to slip him in at the UN, people testified against him because of, like, the maniac thing. Time wrote:

“One charge came from Melody Townsel, who dispatched an impassioned e-mail to the committee about her encounters with Bolton while working for a private subcontractor on a 1994 U.S. Agency for International Development (AID) mission in the former Soviet republic of Kyrgyzstan. Townsel says she wrote a letter to AID officials complaining about the lack of funds for the project from the contractor, a company that had hired Bolton as a lawyer. “Within hours after dispatching that letter,” Townsel told the committee, “my hell began. Mr. Bolton proceeded to chase me through the halls of a Russian hotel–throwing things at me, shoving threatening letters under my door and generally behaving like a madman … Mr. Bolton then routinely visited [my hotel] to pound on the door and shout threats.” Later, Townsel says, Bolton falsely told AID and other U.S. officials that she was under investigation for misuse of funds.”

He chased her through the halls of a hotel in Kyrgyzstan throwing things at her. And when he could not physically intimidate her, he spread smears against her, saying she was corrupt.”

Bolton was an important part of the Bush Jr. propaganda campaign for the US invasion and occupation of Iraq. He has wanted a US war on Iran for twenty years. Really wanting it. Like, waking up every morning and tasting it in his back molars. He is part of the covert MEK (Mojahedin-e Khalq or the People’s Jihadis) network that links the “Marxist-Muslim” organization seeking Iran’s overthrow with Israel and Saudi Arabia. Bolton was very upset that Trump did not bomb Iran last summer after it shot down an unmanned US drone.

So if he is not acting out of principle, what is driving him to intervene against Trump?

Well, it could just be the money. By making himself and his book manuscript central to the Trump impeachment proceedings, he could be trying to transform a minor memoir into a best-seller.

His motives could be more sinister and more consequential, however. What if Bolton is trying to get Trump removed from office? That would imply that he wants a president Pence.

Bolton and Pence are much more in sync than Bolton and Trump. Pence might well take a militarily more aggressive stance against Iran, whereas Trump steps back from the brink of all-out conflict. The very idea would make Bolton’s mouth water so much his mustache would wilt.

Mind you, Trump is fostering war with Iran by his policy of economically blockading it, and is a very dangerous man. But arguably Pence could be more dangerous if he could get in power.

All this isn’t a reason not to impeach and remove Trump. It is a reason to include Pence as a target for impeachment.