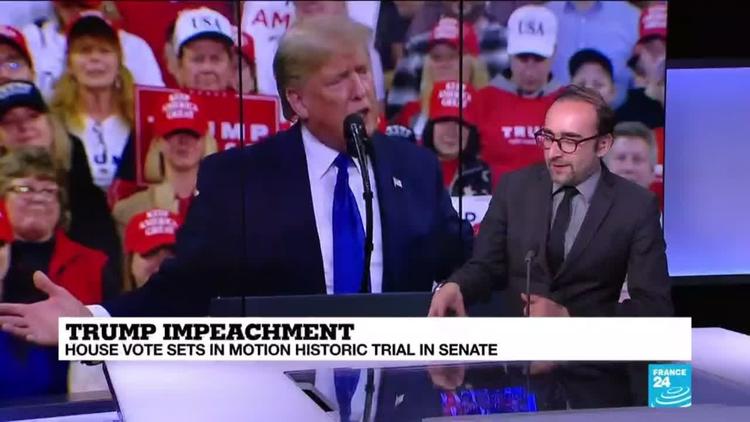 Ann Arbor (Informed Comment) – A new CNN poll done in mid-January (and reported by Jennifer Agiesta) finds that 51 percent of Americans favor the conviction and removal of Donald J. Trump as president. Only 45 percent disagree.

53 percent of Americans think he does a rotten job as a president.

As George Conway pointed out,

The US public is much more negative toward Trump now than their predecessors were toward Nixon even when Nixon was a week and a half from getting on a helicopter and leaving the White House.

And for all of Trump’s bravado on Iran, 53 percent disapprove of his handling of the crisis with Iran.

The same percentage think he is bad at being commander in chief in general.

If he was expecting to look presidential by assassinating Gen. Qasem Soleimani, he failed badly. Americans are even nearly evenly split on whether the strike was even justified (49% said yes, 45% actively thought it wasn’t justified, and 5% weren’t concerned enough with the issue to have an opinion).

52 percent disapprove of Trump’s handling of foreign affairs in general, which means they think he is slightly worse on the Iran issue but bad in general.

Trump is also upside down on his signature projects. 56 percent disapprove of his immigration policies. Given how horrible those policies are, with babies ripped from their mothers’ arms and children caged, it is a sad commentary on the US public that the disapproval number isn’t higher on this issue.

53 percent disapprove of his positions on health care. This one is extremely important, since Republicans lost badly in the House in 2018 in part because of the health care issue, on which Democrats are perceived by the public to be much better than Republicans.

Slightly more, 46 percent, disapprove of Trump’s handling of trade, than approve (45 percent). He is not even winning on that one, another pretext on which he preens and postures.

Trump’s attempt to convince Americans that Vladimir Putin is actually their friend is not going well, with 67 percent saying Russia is a serious or moderately serious threat to the United States.

Even more Americans think the House of Representatives’ articles of impeachment are wholly justified than want Trump gone. 58 percent agree that Trump abused his power, and 57 percent agreed that he obstructed the House impeachment proceedings. So most of them think he dunnit. A majority think he should be impeached right out of office.

Trump’s only winning issue is his handling of the economy over all. You would like to think the American public wouldn’t put such an erratic and despicable person back into the White House just because he had the good fortune to be elected while a long term economic recovery was still in progress. But after 2016, you can’t trust them to do the right thing.

Still, about half of people in the swing states do want Trump gone, which is not a good look for a candidate facing reelection in November.

France 24: “What is American public opinion on Trump impeachment case?”