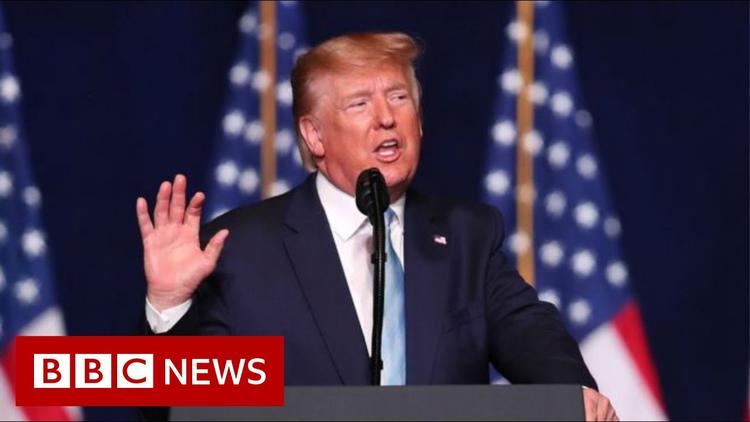 ( 48hills.org) – Trump blinked. After threatening to bomb military and cultural sites in Iran, President Donald Trump has apparently backed down on further escalation in his quasi-war with Iran. He tried to spin his decision as a US victory, claiming his administration had supposedly made America safer by assassinating Iranian Major General Qassem Suleimani.

Iran, in response to this killing, fired 22 ballistic missiles at two US bases in Iraq, destroying a helicopter and some buildings but causing no casualties. Iranian authorities had alerted the Iraqi military in advance, which contributed to the lack of deaths.

The bottom line, says Ibrahim Al-Marashi, an associate professor of history at California State University San Marcos, is that Iran was able to strike US military facilities without consequences.

“Trump is just redefining victory despite Iran striking a military base,” Al-Marashi tells me.

While Trump’s decision to de-escalate will save lives in the short run, his actions have alienated tens of millions of people in Iraq and Iran. By a vote of 170-0, the Iraqi parliament called for withdrawal of all foreign troops from its country. Iraq’s acting prime minister, Adil Abdul Mahdi, received a letter from the US military commanders indicating some troops would leave, but the US later disavowed the letter.

The Trump Administration refuses to withdraw its troops, and Trump even threatened sanctions against Iraq if the troops are kicked out. It remains to be seen if Iraqi leaders will continue their push for troop withdrawal.

Millions of Iranians gathered for funeral tributes to Suleimani. Iranians who were protesting corruption and repression just a few months ago were out in the streets fearing a US attack and rallying around the government.

Cyrus, a businessman who attended last year’s protests and this week’s funeral event in Tehran, says the mourners stretched for miles. “It was the largest crowd I ever saw,” he tells me, asking that only his first name be used. “Everyone was angry and wanted revenge.”

In response to the Trump Administration’s unilateral withdrawal from the Iran nuclear accord in 2018, Iran has been stepping up retaliatory measures. In recent months, Iraqi militias allied with Iran launched attacks on US troops stationed in Iraq. Then, on December 29, the Pentagon bombed two militia bases, killing twenty-five people and wounding dozens. In response, Iraqis stormed the US Embassy in Baghdad. On January 2, US drones assassinated Suleimani and several militia leaders.

Despite a public statement that it does not seek further escalation, the Trump administration may yet see more retaliation, according to a high-level Iranian government source. So far, he tells me, Iran has focused on military targets, but he notes that Suleimani has “millions of followers all across the region from Yemen to Lebanon who will be seeking revenge from the United States. Iran cannot control them.”

“Trump’s assets all around the world will be considered as legitimate,” says the source, who didn’t want his name used for security reasons.

If pro-Iranian groups started blowing up Trump office towers or launching cyber attacks on his hotels, Al-Marashi says, it would put the administration in an awkward position.

“Would the American public tolerate US soldiers defending Trump hotels?” he asks. “It would put Trump in a bind.”

Trump claims the United States had to kill Suleimani because he was “plotting imminent and sinister attacks” on US forces. So far, his administration has provided no public proof of this assertion, and Al-Marashi says Suleimani and his allies posed no more of a threat on January 2 than on any previous day.

“This seemed like an impulsive decision to retaliate for the storming of the US embassy,” he says. “If there was a clear and present danger, not only the American public but the international community would have been told.”

“The United States has a long history of lying about starting wars,” notes Raed Jarrar, an Iraqi-born human rights activist and writer based in Washington, D.C. “The United States exaggerates threats and then claims national security for the purpose of circumventing Congress.”

In my opinion, Trump’s words “imminent and sinister attacks” will go down in history with “weapons of mass destruction” in the annals of major presidential lies.

Ironically, according to Iraqi Prime Minister Mahdi, at least part of Suleimani’s Baghdad visit was diplomatic. He was delivering a message from Iranian leaders in an effort to lower tensions between Iran and Saudi Arabia.

The Trump Administration has labeled Suleimani a terrorist and the Revolutionary Guards a terrorist organization. Both Republican and Democratic presidents claim Suleimani was responsible for the deaths of hundreds of Americans soldiers in Iraq, a blatant falsehood, as explained by professor Stephen Zunes in The Progressive.

But many Iraqis hate Suleimani, because of the brutal tactics used by Iran-allied militias. Starting last October, tens of thousands of Iraqis poured into the streets to protest unemployment, corruption, and Iranian meddling in Iraqi affairs. Iranian-allied militias deployed snipers, who killed dozens of demonstrators.

In another incident, says activist Jarrar, the Iranian trained militia Kataeb Hezbollah attacked demonstrators gathered in Tahrir Square. “The Iraqi army and police stepped aside, and they shot demonstrators,” Jarrar tells me. “Demonstrators later found boxes of bullets made in Iran.”

But many Iranians see Suleimani as a hero who led the fight against ISIS terrorism and who protected holy Shia Muslim shrines in Iraq and Syria. An October poll showed Suleimani was the most popular political leader in Iran, with an 82 percent approval rating.

Suleimani has entered Iran’s pantheon of martyrs. “A martyr is much more dangerous for the Americans than a live person,” says businessman Cyrus. “Mothers will teach their sons to become another Suleimani. Millions will fight the arrogance of the US system.”

Cyrus supported last November’s protests against unemployment and corruption. “The yellow vests in France demonstrated for one year,” he says. “Why not here?”

Cyrus later opposed the demonstrations when they turned violent. “But,” he adds, “everybody supported the demands of protestors. If you didn’t, you didn’t know the situation in Iran.”

As of this writing, the tit-for-tat military attacks have subsided. But the underlying conflict is far from resolved. Trump seems intent on forcing regime change in Iran. Iranians aren’t going for it.

The people of Iran and Iraq are biding their time until November, in hopes that Trump loses the election. So are many Americans.

CNN: “Iranian ambassador: US putting a knife to our throat with sanctions”