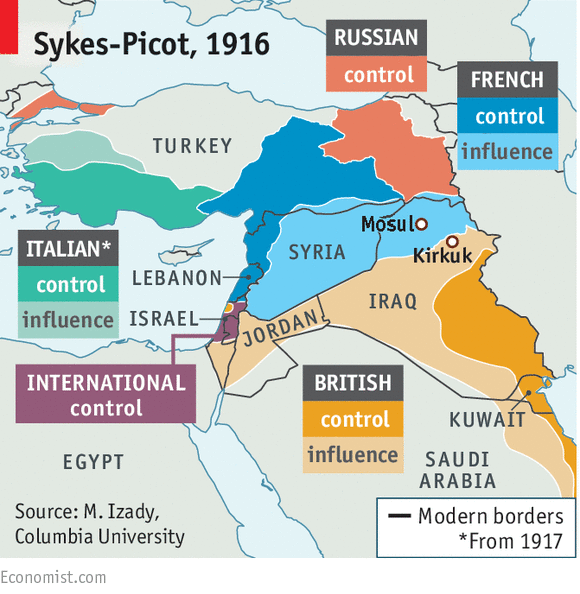 This New Year will mark a century since the historic Treaty of Versailles was put into effect, creating the borders of much of the contemporary world and enabling the European colonial powers to seize the Middle Eastern territories of the defunct Ottoman Empire. The consequences of that treaty and other deals such as the 1916 Sykes-Picot agreement implemented by colonial Britain and France have withstood countless revolutions, massacres, dictators and military interventions.

The borders of the contemporary Middle East drawn by the colonial powers have remained more or less intact through all of that. The new decade heralded by 2020, however, may well witness gradual changes to the artificial borders created by those old treaties.

A key location in the Middle East where the fragility of national borders has been demonstrated is Syria, where civil war has been raging since 2011 between the regime of President Bashar Al-Assad and opposition groups. Despite the fact that the regime has gained significant ground over the past few years thanks to help from Russia and Iran, the faux unity of the country which was held together by the brutal tactics of the Assad family has been compromised, and the door to separatist dreams has been opened – however briefly – for changes to be made.

Kurdish militias such as the People’s Protection Units (YPG) and Syrian Democratic Forces (SDF) aimed to establish an independent Kurdistan in north-east Syria; the chaos in the country gave them a window of opportunity. The dream was shattered by Turkey’s military interventions in northern Syria over the past few years precisely to prevent such a state from emerging on the border with Syria which could support the Kurdistan Workers Party (PKK) terrorist group which operates within Turkey. The latest Turkish intervention was in October; Operation Peace Spring was particularly successful in pushing back the Kurdish militias in order to establish a safe zone in north-east Syria to house around two million Syrian refugees currently in Turkey.

There were also said to have been plans to establish a separate Syrian state east of the Euphrates. These were brought up in June when the Saudi Minister for Arab Gulf Affairs, Thamer Al-Sabhan, reportedly visited SDF-controlled territory in the north-east to call on the Arab tribes in the area to support a joint Saudi, Kurdish and US plan for a breakaway state east of the historic river. Many of the tribes, however, refused to cooperate and emphasised their support for a united Syria. Though it was extremely vague and few details were provided, it revealed the potential fluidity of the borders and the hollow unity which maintains them.

OPINION: What’s next for Syria?

Libya, meanwhile, has been run by two rival would-be governments since the overthrow and killing of Muammar Gaddafi in 2011: the Government of National Accord (GNA) which controls most of the west including the key city of Tripoli, and the Libyan National Army (LNA) which controls the east and is led by the formerly-exiled Field Marshal Khalifa Haftar. In the ongoing Libyan civil war, the UN, Turkey, and Qatar have backed and assisted the GNA militarily, while Haftar’s forces have been backed by Saudi Arabia, the UAE, Iran, Egypt, and Russia.

With recent Turkish guarantees of support and a deployment of its troops to Tripoli in order to repel Haftar, Libya is at a decisive moment in its history, with either a certain military dictatorship if Haftar takes over or a still-fragile and budding democratic government if the capital is defended successfully. Even if Tripoli and GNA-controlled territory are maintained, though, there is little to predict how long it would take – and even if – the rest of the country can be regained and brought under its rule.

There has been an abundance of predictions and analyses in recent years over whether Libya can ever be reunited into its former self. This doubt stems from the historical fact that it was never a united country to begin with, but was split into three prominent entities from antiquity until the end of the colonial era in the mid-1900s when Italy gave it its current name. The three previously-independent provinces of Tripolitania to the west, Cyrenaica to the east and Fezzan to the south-west have resonated into contemporary times, in which there have been calls for the country to be split into such entities again since 2011. The current who-holds-what map of Libya now resembles the old division, with Haftar and his LNA holding Cyrenaica, the GNA holding Tripolitania and Fezzan being occupied by a mixture of the LNA and Tuareg tribal forces.

OPINION: The revolutions in the Middle East are naïve without leadership

In Yemen, the four-year-long civil war between the Saudi and UAE-backed government and the Iran-backed Shia Houthi movement has provided an opportunity for the ever-present southern separatist movement to reappear. The Southern Transitional Council (STC) has grown to such an extent that it was able to capture the southern port city of Aden; it signed a power-sharing agreement with the Yemeni government in the Saudi capital Riyadh in November. Earlier this month, the STC broke off the deal and resumed its quest for independence from the rest of Yemen, proving once again that it inhabits one of the Middle East countries which has inherent geographical, social and historical divisions almost impossible to forget.

In all three countries aforementioned, cases for alternative systems of governance have emerged following their recent revolutions. One of the suggestions is federalism, in which the various provinces would be semi-autonomous under a more decentralised government. Others, however, have called for complete independence from the nation of which they are currently part.

Independence may indeed be granted. Just as the colonial powers made their decisions to redraw the borders of the region over polished negotiating tables, a similar scenario could well take place for any or all of the countries mentioned. The only difference this time is that the old European colonial powers – even the US itself – will not be as involved; the talks will be led at least in part by Russia and China. These two powers have been increasingly involved in the Middle East stage over the past few years, one for geopolitical purposes and the other primarily for economic purposes.

This is true of Russia in particular, for which the diplomatic shift has been seen in the numerous conferences it has held in the Kazakh capital of Astana about the Syrian peace process. The recent talks about the same process held in Geneva symbolised the West’s attempts to take back some of its influence, but the fact remains that Russia is increasingly important to the fate of the Middle East and its existing and future nation-states.

In the new decade heralded by 2020, regardless of who holds more diplomatic leverage, the Middle East’s borders as we know them could be changed drastically, not by the local populations, but by foreign powers at the negotiating table deciding on more artificial borders which guarantee the continuation of ethnic and political tensions. Divide and rule has always been a colonialist tactic; not much has really changed over the past hundred years.