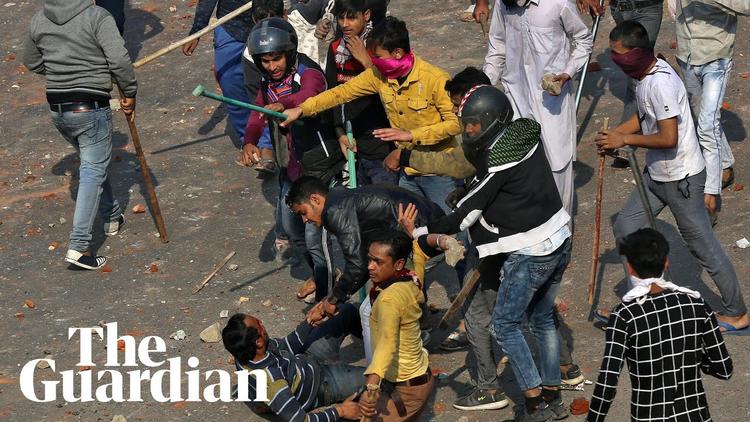 The fallout from two controversial changes to citizenship laws continues to rock India. At least 35 people have died in sectarian violence in New Delhi which began on February 23. Muslims homes and businesses have been attacked and mosques vandalised by mobs.

All schools in the capital were shut as clashes intensified between those for and against the Citizenship Amendment Act (CAA) and National Register of Citizens (NRC).

The CAA, passed by India’s parliament in December 2019, means that “illegal migrants” of Hindu, Sikh, Jain, Buddhists, Parsi or Christian faith from Afghanistan, Pakistan or Bangladesh who escaped persecution and arrived in India before 2014 can be fast-tracked to citizenship. But not if they are Muslim.

Accompanying this is the adoption of the NRC, an attempt to draw up a register of Indian citizens. For those who can’t prove their citizenship through documentary evidence, it can lead to the loss of citizenship. The NRC has only been implemented in the state of Assam, but the government plans to extend it nationwide.

Together, the CAA and NRC mean that Muslims, and others who cannot provide the required documents, will be left with no recourse to citizenship, unlike those of other faiths.

Petitions filed before the Supreme Court of India allege that the CAA violates the right to equality in India’s constitution and is antithetical to the word “secular” in the preamble to the constitution. In late January, the court refused to stop the implementation of the act while giving the government time to respond to the allegations.

Ostensibly, changes in citizenship policy are being framed by the government as a way to target “illegal migrants” or “infiltrators”.

But a common explanation for the changes is that they have been driven by the Hindu nationalism of the Rashtriya Swayamsevak Sangh – the organisation that moulded the prime minister, Narendra Modi, as well as Nathuram Godse, the man who assassinated Mahatma Gandhi. This ideology promotes the idea of a Hindu Rashtra, which aims to formally entrench Hinduism in Indian politics while continuing an anti-Muslim agenda.

As a lawyer and social psychologist, we think there is more to the story. By looking at the way India’s constitution was written and putting the current crisis into the context of social psychological debates about migration, we argue that the government’s policies are constructing Muslims and other minorities as a problem for the country. By creating an “us” and “them” dynamic to Indian citizenship, the government is enabling private policing of people who it finds disagreeable – even if it has not explicitly sponsored sectarian violence.

What the constitution says

At the time of independence, India’s political arrangement was not constituted by ethnic status. Members of any religion, of various castes and sects, and speakers of different languages were all Indian. The historian Niraja Gopal Jayal has argued that the debates at the time the constitution was drafted in the late 1940s were influenced by pressing concerns about partition, mass migration, and the very real possibilities of communal violence between Hindus, Muslims and Sikhs.

These led to the adoption of ius soli, or citizenship by birth, as a key principle within the constitution. Despite polarised debates on citizenship, the decision was ultimately taken that anyone born in India would be Indian – a decision suitable to the historical moment.

For Indians, this has always meant that a person is a citizen of India because of its constitution rather than because of their religious, ethnic, or regional ties. Until now.

The CAA and NRC mark a fundamental transformation by emphasising the principle of ius sanguinis – or citizenship by descent or blood – over that of citizenship by birth. The CAA privileges the acquisition of citizenship on grounds of religion, and the NRC means a person’s name can be excluded from the register of citizens if they cannot prove their descent.

What’s going on in India is a clear example of “othering”, a term describing a group of people – “them” – as a problem, and distinct from “us” – the majority. Creating the distinction between “us” and “them” often closely involves references to nations and nationhood.

The social psychologist Michael Billig has argued that while nations are visible political entities, they make their presence felt in rather unnoticeable ways, which he terms “banal nationalism”. This means that we can readily draw on our and other’s national belonging to inform political projects, such as the citizenship policies in India.

Muslims have been simultaneously categorised as an internal and external other: both a “termite” and “infiltrator”. By being portrayed as potentially non-indigenous to India, all Muslims can be treated as “illegal immigrants” and then put in detention centres or deported. In contrast, those who can claim citizenship are included in the nation and can consequently claim nationhood.

India’s new citizenship policies enable people to doubt each others’ citizenship and national belonging, a particular problem for marginalised peoples. Nationalism that was once largely unnoticed can now become more overt. The recent widespread violence by pro-government mobs against “anti-national” protesters is a visible example of this. Less evident, but no less damning, are instances of insidious exclusion in which “doubtful” citizens are vulnerable to arbitrary police brutality or private harassment.

This combination of private citizens policing “doubtful” citizens, and the police abetting or standing by mob violence against any inconvenient identity (be it based on a person’s religion, gender or profession) is a lethal one. Take for instance the recent case of an Uber driver who drove a poet to a police station when he overheard a phone conversation on anti-CAA protests.

A consequence of this shift might well be that being an Indian citizen becomes synonymous with being a certain sort of Hindu. Hindu Rashtra then will not be imposed from the top down by the Modi government, but it will also become part of everyone’s lives.