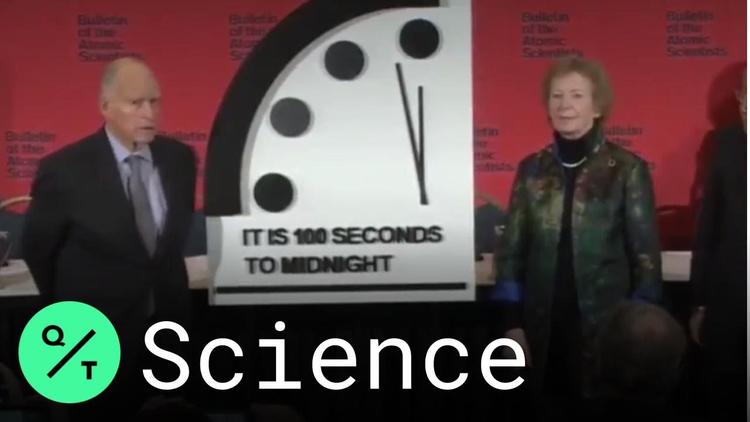 Chicago (Special to Informed Comment) – In 1983, Stanislav Petrov, a lieutenant colonel in the Soviet Air Defense Forces, saw something shocking on his computer. The United States had launched a nuclear missile, and it was heading toward Moscow.

Petrov said that he “just sat there for a few seconds, staring at … the screen with the word ‘launch’ on it.”

One minute later, the computer confirmed that it was a real strike.

The US sent a second missile, a third, and then two more in quick succession.

He counted five in all.

“All I had to do,” he recalled, “was to reach for the phone; to raise the direct line to our commanders.”

That was standard practice, but Petrov decided not to confirm an actual launch.

He knew that his superiors in the Kremlin would likely order a retaliatory attack, resulting in terminal nuclear war and the end of life on Earth. He also knew the approximate number of US missiles that had launch capability and reasoned that “When people start a war, they don’t start it with only five missiles.”

It was the autumnal equinox, when the sun’s rays reflect particularly intensely off the tops of higher-altitude clouds. The early-warning satellite had mistaken this light for missiles.

Petrov was reprimanded for not correctly recording the incident in his logbook. Armies around the world are curiously scrupulous about silly things.

Although he did not consider himself a hero, he claimed credit for one thing: he had received a civilian education, not a military one. Petrov said that this allowed him to ponder and doubt. He was not the type to automatically follow orders.

Stanislav Petrov died nearly three years ago, at the age of 77.

Perhaps it should come as no surprise that we came so close to disaster. Old technology was less sophisticated than today. Since the dawn of the nuclear age, there have been many false alarms due to technical failures, human error, and accidents. By some miracle, none of them set off a nuclear chain reaction.

Also, after many decades of Cold War animosity, political tensions were running very high. The fall of the Soviet Union was still seven years away back when Lieutenant Colonel Petrov was sitting at his computer, searching the skies for harbingers of death.

However, with that ideological contest long over and advanced computers a contemporary reality, such things would be far less likely to happen now.

That would be reassuring if it were true; it is not. Not even close. In fact, we are today closer to possible annihilation than we were in 1983.

Although appearing briefly in the press but then quickly overshadowed by Trump impeachment news, the Bulletin of the Atomic Scientists recently announced its annual Doomsday Clock findings. The organization, whose founding members included Albert Einstein and J. Robert Oppenheimer, announced that humanity now stands at 100 seconds to midnight, or annihilation. This is the closest it has ever been since the Clock, a metaphor for our proximity to nuclear war, was first created back in 1947. At that time, we stood at seven minutes to midnight. For perspective, one year after Stanislav Petrov’s fateful decision, the world was at three minutes to the end.

Over the last seven decades, the minute hand has fluctuated depending on social and political conditions. In the wake of several arms control treaties, we were, in 1991, at 17 minutes till midnight, the furthest away from self-immolation the planet has witnessed since the beginning of the nuclear era. This is an instructive blueprint for how we can move away from 12 o’clock.

The election of Donald Trump in 2016 was one of the primary drivers of increased threats to human survival. Not long after he entered the White House in 2017, the Doomsday Clock was moved to two and a half minutes, and then to two minutes till midnight in 2018 and 2019. Prior to these years, the closest it had been was in 1953, when the United States and Soviet Union began testing hydrogen bombs.

John Mecklin, the editor-in-chief of the Bulletin’s biannual publication, noted that its “Science and Security Board … moved the clock forward … based in part on Trump’s words and actions during the presidential campaign and the months immediately following [it].” Mecklin further opined that the Board’s initial assessment was insufficient because of what later proved to be the president’s greater-than-expected “intemperate and careless behavior with regard to matters that threaten the whole of humanity.” Scientists and risk experts also considered the president’s “wanton disregard for [international] security” after he had assumed the White House.

Specifically, the approach to midnight over the last several years is largely, though not exclusively, the result of the Trump administration’s scrapping of a vital nuclear arms treaty, the possible non-renewal of another, and its hastening of global warming. The Bulletin’s policy analysts stated in their January press release, “US-Russia cooperation on arms control and disarmament is all but non-existent.” Last summer, for example, the administration refused to renew the Intermediate Nuclear Forces Treaty (INF) signed by President Ronald Reagan and Soviet premier Mikhail Gorbachev in 1987. According to Jane’s Defence Weekly, the agreement eliminated 2,692 conventional and ground-launched missiles in Europe.

The US claimed that Russia had violated the accord, but investigations and negotiations were never seriously conducted. If they had, good faith discussions could have gone some distance to address the alleged breach. Abandoning the agreement simply opens the way to a new arms race and precludes mutually verifiable inspections. President Trump’s justification was that since Russia might have broke the rules, the deal had to be thrown out because “We always have to be in the lead.”

Another US-Russia nuclear accord that the administration could toss on the scrap heap is the New Strategic Arms Reduction Treaty, or New START, which was ratified in 2010. It is essentially an improved version of the START I agreement signed by President George H.W. Bush and Gorbachev in 1991. The Arms Control Association reported that START I limited strategic nuclear warheads to 6,000. New START, however, caps this grade of weapon (as well as some others) at 1,550, marking a 74 percent reduction.

In 2016, candidate Trump falsely claimed that Russia had increased production of these armaments in violation of the treaty’s parameters, while a beleaguered America stuck to it. Russia has, in fact, honored the treaty. In a 2017 phone conversation, Trump reportedly told President Vladimir Putin that New START was a “bad deal” for the US, suggesting that he might withdraw from it.

In June 2019, then-US National Security Advisor John Bolton echoed the president’s sentiments and said in an interview with the Washington Free Beacon that “There [was] no [final] decision” about the treaty’s fate, but “it’s unlikely” that the administration would extend the accord beyond its 2021 deadline.

Putin asserted that his government will sign the agreement without any preconditions.

Recently, Trump has adopted a more conciliatory tone, now claiming that he wants to include China, as well as fold other categories of weaponry into a revised deal. Beijing is not interested, and some commentators have speculated that the president might be willing to let New START expire if he does not get his way. If the treaty is not renewed, then it will be the demise of the last US-Russia arms control agreement.

The Bulletin also points out that the administration and its allies in the US Congress, among other dangerously irresponsible national leaders, are flagrantly disregarding the near-unanimous scientific consensus regarding the threats posed by anthropogenic climate change. Global warming has severely exacerbated storms, floods and draughts, resulting in crop disruption and significant population displacement. Environmental degradation leads to more refugee flight and competition for resources, creating the conditions for more regional conflicts. These factors and the US withdrawal from the Paris climate accord are rapidly driving our species (and many others) to the precipice.

Also, the Trump administration’s Nuclear Posture Review of 2018 outlines a larger role for low-yield nuclear weapons in US strategic considerations. This is deeply troubling. The fact that the executive branch and some members of the Pentagon believe that limited nuclear strikes are safe flies in the face of other, more sober assessments.

For instance, the late Robert McNamara, Secretary of Defense in the Kennedy and Johnson administrations, would have been horrified by recent developments. His tenure in government was marked by the Cuban Missile Crisis, another incident that nearly wiped out the planet but was avoided thanks to another Russian military officer, Vasily Arkhipov. As a Cold Warrior and an architect of the Vietnam War, McNamara was certainly no dove. Yet, he was intimately familiar with nuclear arms and their destructive capacity.

In an essay published in Foreign Policy in 2005, McNamara said, “There is no way to effectively contain a nuclear strike … no guarantee against unlimited escalation once the first nuclear strike occurs.” He later advocated for the elimination of all nuclear arsenals, a proposal shared by many current and former world leaders, including Mikhail Gorbachev. The human and environmental consequences of the detonation of even a few weapons would be nightmarish. As the former defense secretary emphasized, we entertain notions of limited use at our peril.

McNamara’s article, which should be required reading in high schools and universities, is called “Apocalypse Soon.” It is an appropriate title. Back in 2005, when the end was a bit further away, he warned that “The risk of accidental or inadvertent nuclear launch is unacceptably high.” Today, treaties are torn up and inspection programs are ending, resulting in the production of more nuclear weapons. The risks have become even more unacceptable now than they were then.

As we creep closer to midnight, much depends on what we do from here. There might not be another Stanislav Petrov to save us next time.

Quicktake by Bloomberg: “Doomsday Clock: ‘It is 100 Seconds to Midnight'”