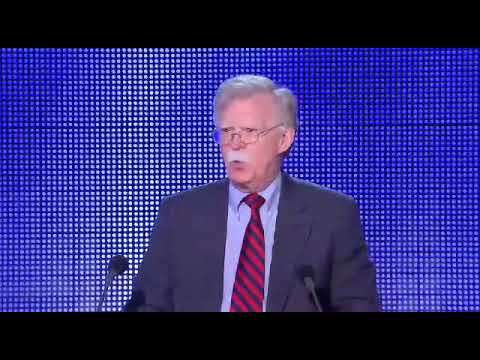 Oxford, UK (Special to Informed Comment) – On February 11, 2020, the Islamic Republic of Iran marks the 41st anniversary of the victory of the Islamic Revolution. Thus, it has defied the Trump administration’s prediction of its demise for two years beyond its allotted time.

In his speech at a conference of the MEK (Mojahedin-e Khalq or People’s Jihadis) in 2017, for which he received huge fees, the former National Security Advisor John Bolton said: “The outcome of the president’s policy review should be to determine that the Ayatollah Khomeini’s 1979 revolution will not last until its fortieth birthday…and that is why before 2019 we here will celebrate in Tehran.”[1]

In 2018 President Trump’s personal lawyer Rudy Giuliani also predicted: “Freedom is right around the corner … next year I want to have this convention in Tehran.”[2]

The Secretary of State Mike Pompeo and his neocon allies have tried very hard to fulfill those wishes and to bring about regime change in Iran before its 40th anniversary. To this end, they have implemented a policy of “maximum pressure” and have imposed unprecedented illegal sanctions in violation of the unanimously approved U.N. National Security Council Resolution 2231 that lifted all the earlier sanctions on Iran as part of the nuclear deal (Joint Comprehensive Plan of Action or JCPOA).

The nuclear deal was reached between Iran and the United States, and all other permanent members of the Security Council, plus Germany (5+1). The deal was also unanimously endorsed by the European Union Commission.

After President Trump violated the nuclear deal (there is no clause in it allowing one side to withdraw unilaterally) on 18 May 2018, Iran continued to abide by it for a whole year. The International Atomic Energy Agency (IAEA), which is in charge of supervising the deal, in 15 separate quarterly reports – five of them since President Trump came to power – has confirmed that Iran had faithfully carried out all her obligations under the deal. As late as last week, the IAEA stated that there had been no violations of the nuclear deal.[3]

A year after US withdrawal from the deal when Iran continued to be deprived of the economic benefits to which she was entitled, the Iranian president announced that Iran would take incremental steps to reduce her obligations under the deal, unless other parties fulfilled their commitments. Although all the steps that Iran has taken so far have been in keeping with the JCPOA, under the IAEA supervision and are reversible, they have been portrayed by US officials as major violations of the deal, and they have continued to increase the sanctions on Iran.

The other signatories to the deal criticised President Trump for his violation of the deal and promised to remain faithful to it. The EU3 (the United Kingdom, France and Germany) tried very hard to keep the deal alive by devising the INSTEX mechanism to facilitate trade with Iran.[4]

However, in view of US pressure and the dominant role that the US dollar plays as an international currency, all their efforts have proved futile. US sanctions amount to a virtual siege or blockade, which is an act of war. Not only have they drastically cut Iran’s oil exports which form a large part of the government budget, they have also prevented Iranian banks and industries engaging in normal business with the rest of the world.

Contrary to the claims of US officials, the sanctions have also blocked the sale of food and medicine to Iran, despite the fact that there is no explicit restriction against them. However, due to the difficulty of banking transactions, in practice, Iranians cannot even import much-needed medicine.

If there were any doubts about President Trump’s real motivation for violating the nuclear deal with all its grave consequences, his remarks at the ceremony unveiling the so-called “Deal of the Century” made his motives absolutely clear. Trump did not violate a truly remarkable non-proliferation agreement that could have acted as a model for other similar deals because it was in any way defective or did not prevent Iran from ever manufacturing a nuclear bomb. The main aim was to help his friend Benjamin Netanyahu in his vendetta against Iran.

When the nuclear deal was being negotiated under President Obama, Netanyahu addressed a joint session of Congress to kill the main foreign policy initiative of a sitting president, and he received dozens of standing ovations for this act of discourtesy. He did not get his way then, but as the Trump administration came to power, surrounded by strong supporters of Israel, including many Christian Zionists, Netanyahu found a unique opportunity to achieve his goal.

Standing next to Netanyahu at that ceremony, Trump said: “As everyone knows, I have done a lot for Israel: moving the United States Embassy to Jerusalem; recognizing — (applause) –- recognizing the Golan Heights — (applause) — and, frankly, perhaps most importantly, getting out of the terrible Iran nuclear deal.”[6] So, it is clear what was the real reason behind violating the nuclear deal.

The US’s withdrawal from the nuclear deal and the policy of “maximum pressure” on Iran has had a number of other grave consequences. It has put Iran and the United States on a path to war. In May 2019, there were attacks on four ships in the Indian Ocean, and the US said that it was highly likely that Iran was behind those attacks.

When, as directed by former National Security Advisor John Bolton, British marines boarded and stopped an Iranian tanker near Gibraltar for allegedly transporting oil to Syria, Iranian revolutionary guards seized the British-flagged tanker Stena Impero for alleged violations near the Strait of Hormuz. Both tankers were subsequently released with their cargoes intact.

On June 19, 2019 Iran shot down an advanced US military drone, claiming that it was flying over Iranian territory, and provided the debris of the drone in its waters to prove the point. On 14 September 2019, two major Saudi oil facilities were attacked by 25 drones and cruise missiles, cutting Saudi output by half. The Houthis claimed responsibility for those attacks, but the United States again pointed the finger at Iran.

However, the most serious incidents took place in December 2019 and January 2020. After a US contractor was killed in missile attacks at a US base in Iraq, US officials blamed Kata’ib Hezbollah, which they described as “Iran-backed militia”, for the attack. In retaliation for that killing, US forces attacked three of Kata’ib bases, killing dozens and wounding dozens more. Al-Arabia has put the number of those killed at the bases at 63.[7]

Those killings gave rise to massive protests in Baghdad, including an attack on the US Embassy, which was used as an excuse to assassinate the commander of the IRGC Quds Force, General Qasem Soleimani, and the deputy leader of the Kata’ib Abu Mahdi al-Muhandis, and a few other Iraqi officials who were with them.

Millions of Iraqis and Iranians took part in the funerals of those two generals. In retaliation for Soleimani’s assassination, Iran fired two dozen missiles at two US bases in Iraq. At first, President Trump tweeted that all was well, and no one had been injured. However, gradually it transpired that a number of forces in the bases had suffered traumatic brain injuries. At first, the number was put at 11, then 34, 54, 64, but according to the latest Reuters report more than 100 US troops suffered brain injuries.[8]

Iraqi officials have recently stated that the initial attack on the US base that killed one contractor had been carried out by ISIS, not by Kata’ib forces.[9] So, it seems that the world was brought to the brink of a major war on the basis of either a deliberate lie or a misunderstanding.

It is clear that Trump’s policy of “maximum pressure”, involving crippling economic sanctions and even threats of war has not brought the Iranian government to its knees. On the contrary, it has forced Iran into the position it held prior to signing the JCPOA. Meanwhile, many Majles deputies have demanded that the government should withdraw from the NPT. That will be a very provocative move that will make the situation even worse than it is at present.

But perhaps the worst outcome of Trump’s policy towards Iran has been to undermine the position of the moderates and reformers in the Iranian government and strengthen and embolden the hardliners. On 21 February, Iranians go to the polls to elect a new Parliament or Majles. The current Majles is dominated by moderates with 120 Reformist deputies, 86 hardliners or Principlists, 10 associated Principlists, 66 independents, and five from religious minorities.

However, the hard-line Guardian Council has disqualified a large number of applicants for election, including 90 of the current 290-strong parliamentarians. Iranian President Hassan Rouhani has criticised the disqualifications, saying: “We cannot simply announce that 1,700 candidates have been approved and ignore the question of how many political groups those people represent. That’s not what an election is about.”[10] He has called on the current parliament to pass legislation limiting the vetting powers of the Guardian Council.

This issue has opened up a major rift between moderates and hardliners. The West should have supported the more moderate elements who work for reconciliation with the West and more political freedoms at home. Repressive regimes can be changed either through foreign-led military force, and we have seen the consequences of such violent actions in Iraq and Libya; or through a gradual but meaningful change from within. Iranians have shown that they are in favour of peaceful change, but the current policies of the Trump administration have made this almost impossible.

The current impasse in Iran will either result in a much more hard-line government, similar to the one led by President Mahmud Ahmadinezhad, or even in a military coup led by the IRGC. Either scenario will push back the possibility of democratization in Iran by many years, and might even lead to a devastating war. The neocons who have been pushing Trump to pursue these policies have not served him, the United States or Iran well.

The only alternative is for the United States to return to the nuclear deal, lift the sanctions and then try to reach a more comprehensive agreement with the Iranian government. The other alternative is war.