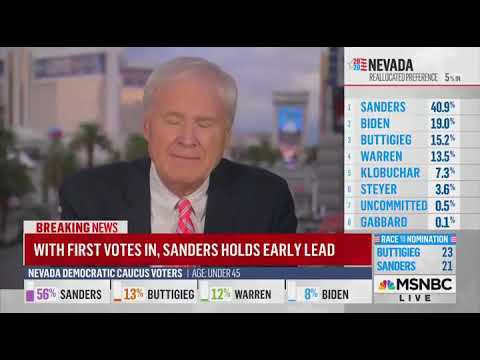 NB Matthews apologized for his remarks on 2/24/20

Ann Arbor (Informed Comment) – I was watching MSNBC Saturday afternoon during the voting at the Nevada caucuses. I did a little channel surfing, checking in at CNN and at the real news on Al Jazeera. But mostly I had MSNBC on. And I nearly fell off my chair when I saw Chris Matthews compare Bernie Sanders’ victory to the Nazi invasion of France. He said he had been reading about WW II, and told the anecdote of a French general calling Churchill as the war began to tell him “it is over.” He said Churchill asked him how it could be over if it just began. The officer, Matthews smirked, insisted. “It is over.”

It was a tasteless remark that has led to calls for Matthews’ ouster.

It is not entirely clear to me who the various players in this analogy are supposed to be. Some have assumed that Matthews was comparing Sanders to the invading Nazis, with the French officer corps being the corporate Democrats. But I actually think what Matthews probably meant was that Bernie’s progressive wing of the Democratic Party was a) assured of winning the nomination for Democratic standard-bearer in the 2020 presidential race, and b) was doomed to fall before Trump even as France fell to Hitler.

I think Matthews is just wrong about Sanders not being able to beat Trump. I think Bernie will steal back the white working class from Trump, who is widely and deeply hated and has all the hallmarks of a one-term president. During the impeachment proceedings 57% of Americans said they wanted him removed. Bernie polls well against Trump in swing states like Michigan, and Matthews is discounting the Latino and youth votes and underestimating the hatred white women (the backbone of the Republican Party) have developed for Trump.

In any case, the temptation to make analogies to World War II should usually be resisted.

The anecdote was only the most egregious thing a cable news pundit has said about Senator Sanders. In other respects it wasn’t that unusual. MSNBC commentators notoriously lean toward Joe Biden and the Wall Street wing of the Democratic Party, and have a weird Sanders derangement syndrome. (Chris Hayes is an exception.)

The attempt to erase the difference between Stalinism and social democracy or democratic socialism has been typical of corporate ideology in the United States and was deployed by Sen. Joseph McCarthy, whom Matthews increasingly resembles. I remember the Cold War, too, and remember American fascism railing against Medicare as “socialized medicine” and even against Social Security.

Bernie Sanders is not actually a socialist. Socialism involves the public ownership and control of the means of production. Bernie is just advocating managed capitalism on the Finnish model. Finland is the happiest country in the world. The U.S. is 19th according to the criteria used by Sustainable Development Solutions Network for the United Nations. Bernie is also advocating a graduated income tax of the sort Republican President Dwight Eisenhower supported in the 1950s. Matthews is suggesting that Eisenhower was a Communist? I mean, what world does he live in.

The fact is that one of the ways the US and the West won the Cold War was to adopt key socialist programs so as to fend off more extensive working class demands. The alternative to a France with universal health care and strong unions and a social safety net was very likely a Stalinist France.

During Matthews’ political life, the finance sector went from being 10% of the US economy in 1970 to 20% today. This sector does not produce anything of value and it certainly does not produce twice what it did 50 years ago. The top 1% now takes home 20% of the US annual income.

Now, it adds, “The top 20 percent held 77 percent of total household wealth in 2016, more than triple what the middle class held, defined as the middle 60 percent of the usual income distribution”

Such an unbalanced economy is bad for growth, since extremes in the distribution of wealth reduce economic demand.

Neoliberal policies (pretenting that “the market” will educate us, e.g.), have destroyed public higher education and forced enormous numbers of young people into heavy debt.

On top of all that, our corporate elite hid the climate crisis from us for the last 50 years so that they could make a couple extra trillion by wrecking the planet, harming average Americans by destroying forests, shore, fisheries, and other sources of wealth.

Matthews either does not care about these problems or he doesn’t care enough to do anything about them. He is looking out for the people who make $5 million a year and up (he is a small fish in that world).

Corporate media will not tell you what America’s real problems are, because they are the class that benefits from all the dysfunctional characteristics of our Late Capitalism. Although MSNBC has cultivated the image of an anti-Fox, as sort of Democrat TV, it is part of a corporate media conglomerate and apart from a couple of anchors isn’t actually very progressive. It is part of NBCUniversal, which in turn is owned by Comcast. Trump was promoted by NBC as the star of the Apprentice despite allegations of his abuse of women around him, and NBC has protected him by carefully sequestering evidence of his misbehavior. In other words, the company has coddled a psychopath and helped him into office. In summer-fall of 2016, Chris Matthews regularly just turned his show, “Hardball,” over to broadcasting unhinged Trump rallies at 7:30 pm and it seems a little unlikely that there wasn’t some collusion there. Comcast CEO Brian L. Roberts did a happy dance at Trump’s destruction of net neutrality and his ruinous 2017 tax cut on the super-wealthy (which, no, has not benefited ordinary Americans, and instead will cost them trillions). Roberts is an old golf buddy of Trump’s.