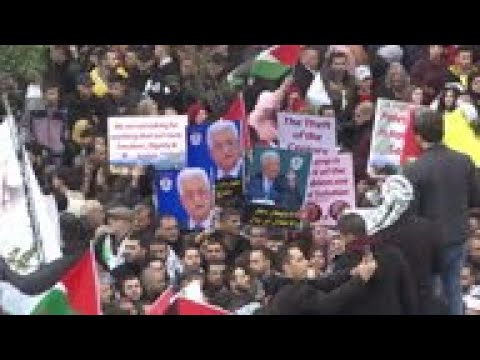 Ann Arbor (Informed Comment) – Some 94% of Palestinians reject the Kushner Plan for Palestine, and two thirds of Palestinians ,according to a recent opinion poll, support the way in which President Mahmoud Abbas has tackled it.

Abbas has cut off diplomatic relations and security cooperation with Israel and the United States.

In fact, 82 percent of Palestinians believe that with the Kushner Plan, their struggle with the Israeli government has gone back to being “existential.” By that they mean that the Oslo Peace process is a dead end and that there is no path to a negotiated settlement. They nevertheless expect the Oslo framework to limp along.

84% want to withdraw recognition of Israel, which the Palestine Authority granted in 1993 in return for the pledge that a Palestinian state would be permitted inside 1967 borders.

78% want to stage nonviolent protests against the Kushner Plan.

US cable news won’t show it, but Palestinians have been staging massive public protests against the Kushner Plan in the West Bank:

The Kushner Plan contained a US pledge of billions of dollars in aid for the Palestinians if they acquiesced in its terms. Some 91 percent of respondents to the poll slapped away Trump’s money.

A majority of the Palestinians have given up a two-state solution, with 61 percent now saying it is no longer practical, with only a bit over a third still clinging to that hope.

Ksenia Svetlova at Al-Monitor points out that some 33 percent of Israelis now support a federation with Palestine. I was shocked when I was in Israel a decade ago to have a fairly right wing Israeli academic argue to me that it would be better for Israel to give the Palestinians citizenship rather than to withdraw from the West Bank. I’m afraid, though, that the 33 percent of Israelis who now would accept a federation with Palestine don’t have in mind offering the Palestinians Israeli citizenship, but rather are thinking of a Bantustan.

Palestinians, however, cannot easily leave the Occupied Territories, since the Israelis do not permit them to have citizenship rights in a state. They therefore are stateless and don’t have proper passports. Countries view stateless people as flotsam and undesirables, and mostly won’t give them entry visas.

All this was explained to me once by Palestinians in the Nahr al-Balad refugee camp in Lebanon, to which they had been exiled by Israeli militias.

Ironically, the Nazis reduced European Jews to a stateless population in the 1940s, precisely in order to demonstrate their abjectness and to prove that no other countries would want them. This worked, and even the United States refused to admit stateless Jewish refugees in that era.