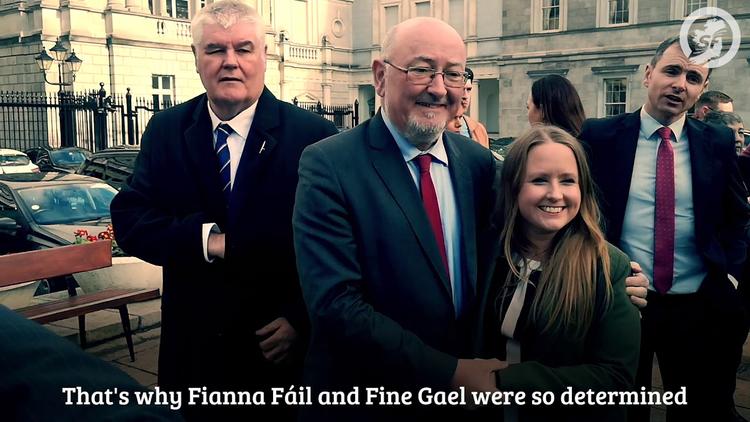 Ann Arbor (Informed Comment) – That the Left has swept to power in Ireland may position that country to play an important role in the Israel-Palestine conflict.

The European Union member states sometimes rail against their irrelevance on foreign policy. Despite Europe’s enormous population (pop. 445 million vs. 320 million in the U.S.) and a joint nominal GDP that is second in the world only to the U.S., Europe is not a big player on the world scene and has tended to farm out a lot of foreign policy to the United States or to continue to allow individual states to pursue national goals (as with France in Africa). The recent Irish election may, however, be the beginning of a more pro-active European policy on Palestine.

Ireland has traditionally had good relations with Israel. The Irish, however, have moved to the left and begun to see the Palestinians as a colonized and oppressed people like themselves (Ireland suffered with British colonialism in some form for 800 years).

Even the centrist party, Fianna Fail, has begun supporting a boycott of goods produced by Israeli squatters on the Palestinian West Bank, and it is a measure wholeheartedly supported by the Irish Left.

The major party on the Left, Sinn Fein, put a plank in its electoral platform saying, it will “ban goods from Israel’s illegal colonial settlements in Palestine from entering the Irish market by implementing the Occupied Territories Bill”. Sinn Fein’s paramilitary wing, the Irish Republican Army, back in the days of the Troubles sometimes trained alongside fighters of the Palestine Liberation Organization. With the Good Friday Agreement of 1998, the IRA ceased resort to violence.

The centrist Fianna Fail is also committed to the Occupied Territories bill.

It is opposed by the right wing Fine Gael for fear of upsetting relations with Washington.

So what happened on February 8 was that the Left won big. The right wing Fine Gael, once a major player, only got 35 seats in the 160-member parliament.

While the centrist Fianna Fail got the most seats, 38, it was almost tied by Sinn Fein, the leftist party, which got 37.

Small left-leaning parties such as Labour, the Greens, the Social Democrats and others, along with independents, took the rest of the seats.

Leo Varadkar of the right wing Fine Gael has given up on a role in government, saying his party will sit in the opposition benches. He complained that 80 percent of parliament is in the hands of the left parties, and it is now up to Sinn Fein to form a government. I think he was counting the centrists in “the left,” but that is what the world looks like from the Right.

Unfortunately for Ireland, the actual left parties put together do not have the 80 needed for a majority and to form a government. Also unfortunately, the centrist Fianna Fail says it refuses to go into coalition with Sinn Fein.

Under these circumstances, you could have a minority government led by Mary Lou McDonald of Sinn Fein, which could survive as long as Fianna Fail, the centrists, led by Micheál Martin,, vote with it on important issues (which they have been doing in recent years anyway). Or maybe they will have to have another election.

In any case, since the entire left and the centrists, who together have the vast majority of seats, want to pass the Occupied Territories bill, right now it looks as though passage is a good bet.

If that happens, Ireland will be the first European Union country to criminalize the importation of goods made on stolen Palestinian land with stolen Palestinian resources. You could imagine Spain following suit, and, outside the EU, Norway.

This development would be a major setback for the Israeli ministry of strategic affairs, the main goal of which is to prevent boycotts of Israel over its crimes against humanity in the Occupied Palestinian territories. Dublin would certainly come into conflict with Trump over the measure, though who knows if they will have to worry about Trump after November.

There could be worse news for the Israelis, too. Fianna Fail and Sinn Fein have both spoken about recognizing Palestine as a state, giving it full embassy status.

Because of their own role in the Holocaust against six million Jews during WW II, Germany and France, the countries that lead the EU, have been highly reluctant to criticize Israel. It has been Catalonia in Spain and smaller states with resentments about colonialism who have taken the lead here. The Jeremy Corbyn wing of the British Labour Party also took a stance against the brutalization of the Palestinians, but the powerful British Israel lobbies managed to paint this simple human rights advocacy as anti-Semitism, a typical and cynical tactic of right wing Zionism.

Those considerations won’t apply in Ireland, which will therefore be free to take a principled stand in active support of implementing the 1949 Geneva Convention on the treatment of occupied populations.