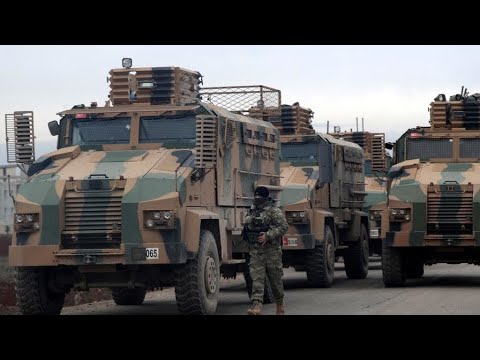 Ann Arbor (Informed Comment) – Al Jazeera reports that nearly three dozen Turkish soldiers in a barracks in Syria were killed Friday by an air strike. Although most reports say that the bombing was carried out by the Syrian Air Force, some Syria experts suggest that it was instead done by the Russian Aerospace Forces, which are giving air support to a Syrian Arab Army campaign to take back Idlib province from fundamentalist rebels.

NEW – Updated reports indicate a 2-storey building used by the #Turkey military as a command headquarters was leveled in a targeted #Russia airstrike.

In any case, since Russia is strongly backing the Syrian Arab Army, these troop deaths raise the specter of an all-out Turkish war in Syria that could turn into a hot conflict between Ankara and Moscow.

Turkey has invaded northern Syria with thousands of soldiers and president Tayyip Erdogan pledged after a two-hour meeting of the Turkish national security council to throw everything the Turkish army has at all the Syrian Arab Army forces.

The opposition People’s Republican Party (CHP) leader Kemal Kalicdaroglu, however, complained bitterly about Erdogan’s escalation. He pointed out that there are no Kurds in Idlib and therefore no threat (as he put it) of terrorists to Turkey. He questioned why Turkish troops were there at all, and asked if Erdogan was stealthily getting the country involved in a regime-change operation in Syria.

Turkey appears to have wanted American and European help against the Russo-Syrian campaign. But although Turkey is part of NATO, it is fighting in Syria without any warrant of international law and is not under attack on Turkish soil. Article 5 of the NATO charter does not therefore apply, and other NATO countries are not obliged to support the Turkish invasion of another country. Turkey maintains that it is engaged in a humanitarian mission and is defending innocent victims of the regime. Some of the rebel militias, however, have been linked to al-Qaeda in the past and comprise some extremist elements.

Because of the extremism of some of these groups, Russia is eager to see them completely defeated by the Damascus regime, lest they exercise an influence on Russian Muslims in the Caucasus. Some NATO countries such as the Czech Republic concur, and tilt toward Syria against fellow NATO member Turkey.

NATO is not willing to offer any practical help to Turkey in this budding war. Likewise, the United States was asked by Ankara to supply Turkey with anti-aircraft batteries. Since these would have been deployed against Syrian and Russian planes and might have drawn the United States back into Syria, Trump refused the request.

Turkey’s Erdogan therefore feels abandoned by his putative allies. He, however, has not exactly been a reliable partner lately. He attacked US Kurdish US allies against ISIL in northeast Syria, infuriating the American officer corps and public. He insists on buying the Russian S-400 anti-missile system, because, he says, the United States declined to sell him an equivalent missile defense weapon. But operating the Russian s-400 in close proximity to NATO electronic weaponry will allow Russian spyware to compromise essential NATO secrets.

In fact, now that he is on the verge of a war with Russia, the Trump administration is calling on Erdogan to give up the S-400 purchase. Washington is still, however, not offering Turkey an alternative.

In response to the killing of 28 Turkish soldiers in Idlib, Bailey Hutchison, the U.S. ambassador to NATO, said:

“I hope that president Erdogan will see that we are the ally of their past and their future. And they need to drop the S-400.” https://t.co/c1TQAfMPE4

Erdogan appears to be taking revenge on his European allies for not standing by him by reneging on his pledge to rein in uncontrolled migration from Turkey into Europe. In 2015-2016 hundreds of thousands of such migrants, many from Afghanistan and Africa as well as Syria, were allowed to cross Turkey into Europe. Turkey took billions of dollars in what were essentially bribes by Europe to police its borders more effectively, and since that time the immigration crisis has subsided. Erdogan seems to have started it back up again. His implicit message to Europe is that Turkey is not going to absorb, all by itself, another million Syrian refugees created by the current regime Idlib campaign, on top of 3.6 million Syrians already in Turkey. If Europe won’t stand up to al-Assad and Putin, he is saying, then they will have to share in dealing with the immigration crisis.

The regime’s Idlib campaign violates last summer’s Sochi agreement that had established a cease fire between rebel and regime lines and allowed the erection of Turkish observation points, many of which are now behind Syrian lines. Syria, however, says that the Sochi agreement had bound Turkey to rein in the extremist groups, some of them close to al-Qaeda at least in the past, but that Ankara has failed to do so.

One of the goals of president Bashar al-Assad was to clear the entirety of Aleppo province, to the east of Idlib, of rebel garrisons and checkpoints, taking the town of Saraqeb, and to thus reopen the M5 highway between Damascus and Aleppo, Syria’s two largest cities.

In the past two days, Turkey-backed rebel militias took back Saraqeb and hoped to close the highway again.