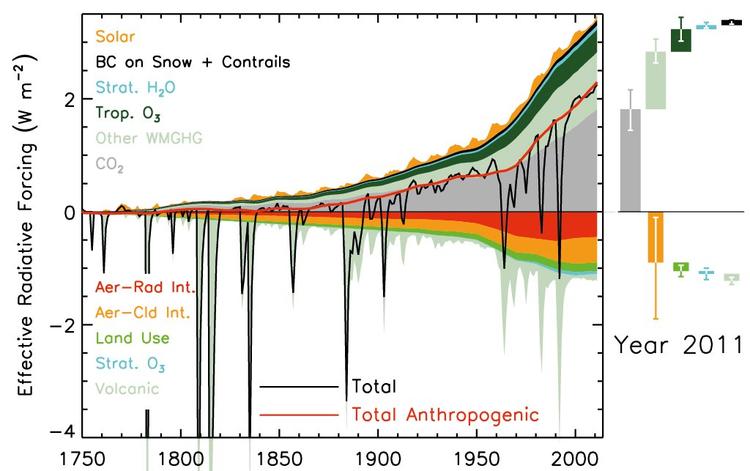 One of the earliest climate model predictions of how human-made climate change would affect our planet showed that the Arctic would warm about two to three times more than the global average. Forty years later, this “Arctic amplification” has been observed firsthand.

Record-breaking Arctic warming and the dramatic decline of sea ice are having severe consequences on sensitive ecosystems in the region.

But why has the Arctic warmed more than the tropics and the mid-latitudes?

We now know that this is due, in part, to tiny concentrations of very powerful greenhouse gases — ozone-depleting substances such as chlorofluorocarbons (CFCs).

The ozone layer is the protective layer in the stratosphere, roughly 20-50 kilometres above the Earth, that absorbs harmful ultraviolet radiation from the sun. Ozone-depleting substances are potent greenhouse gases, but they are more commonly known for their devastating effect on the ozone layer.

These chemicals were invented in the 1920s. They were touted as “wonder gases” used as refrigerants, solvents and propellants, in refrigerators, air conditioners and packing materials. It wasn’t until the 1980s when scientists discovered a hole in the ozone layer above Antarctica that they realized the full extent of the ozone-depleting nature of these chemicals.

In 1987, 197 countries agreed to phase out their use of ozone-depleting substances by ratifying the Montréal Protocol. The success of this historic international agreement has reduced the emissions of CFCs to nearly zero; however, the recovery of the ozone hole has been slower as CFCs remain in the atmosphere for decades.

Due to the effect of ozone-depleting substances on the ozone layer, climate scientists who study these chemicals and their climate impacts have been focused on the consequences of ozone depletion. The climate impact of ozone-depleting substances themselves has been typically considered small given the very tiny concentrations of these gases in the atmosphere, and has been largely unexplored.

One way that climate scientists approach problems like this one is to use computer models of the Earth to understand what the effects of different phenomena, such as volcanic eruptions, and greenhouse gases, such as methane, might have on air temperatures, ocean circulation patterns, rainfall and so on.

This is one of the first times the role of ozone-depleting substances had been isolated. Typically, climate model experiments that examine the roles of different climate drivers will lump all greenhouses gases together.

Comparing the two model simulations revealed that global warming was reduced by one-third and Arctic warming by one-half when the ozone-depleting substances were not included in our simulation.

Why do ozone-depleting substances have such a large impact despite their very small atmospheric concentrations? First, these chemicals are very potent greenhouse gases, a fact that we have known for a long time. Second, in the late-20th century, warming from carbon dioxide is partially cancelled out by the cooling that comes from particulate matter in the atmosphere, allowing CFCs and other ozone-depleting substances to contribute substantially to warming.

Understanding why the feedbacks differ is the aim of our future research but, in the meantime, our work clearly demonstrates the significant impact of ozone-depleting substances on Arctic climate.

Thirty years ago, those who signed the Montréal Protocol were not thinking about climate change. Yet, research such as ours underscores the important role this agreement will play in mitigating future warming as the concentrations of ozone-depleting substances decline over time.

That said, without massive reductions in carbon dioxide emissions in the coming decades, the gains we will achieve through the Montréal Protocol will be quickly overwhelmed. Further action is needed to protect the Arctic — and our planet.