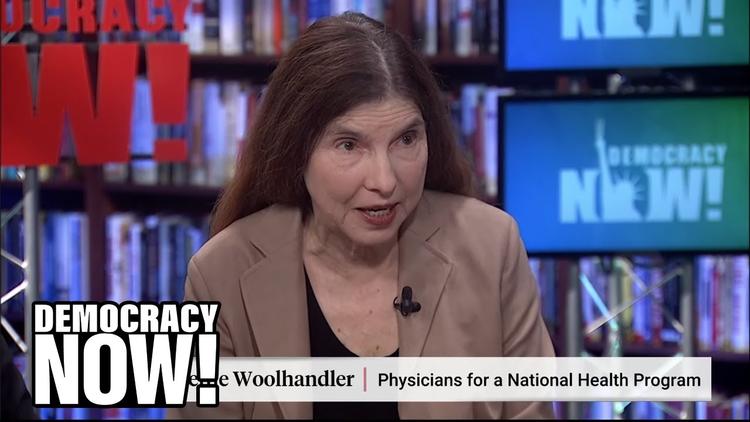 Southwest Harbor, Maine (Special to Informed Comment) – Why is there even a question as to whether any Cov19 vaccine or diagnostic test kit should be free? Vaccines and diagnostic tests are essential components of any public health program, not merely conveniences to an isolated individual. When symptomatic patients are tested for a disease, indispensable information about the spread of the disease is accumulated, with potential benefit to all of us. Vaccinations in turn protect not only the individual patient but also those who might be infected by him/her. That an administration would even consider restricting access to such indispensable instruments of public health is a sad commentary on the state of political discourse today.

Some members of both parties have demanded inexpensive access, but both parties have long been complicit in a model of drug development and pricing that makes healthcare unaffordable for some even as it makes billionaires of a select few. Contrary to the impression left by the pharmaceutical industry it has not always been that way. Other more humane and productive approaches to drug development are not only possible but have also been key moments in our own medical history.

Typically the pharmaceutical industry defends patent protection for its new drugs on the grounds that the resulting monopoly profits fund new research and development. This contention is misleading on two fronts. Much of the profits go into marketing and advertising, More scandalously the development model is not another instance of Reagan’s magic of the market mythology. Columbia economist Jeffrey Sachs puts it this way:

“The prevailing model, indeed, in plutocratic America is that taxpayers fund the vast majority of research and development (R&D) for pharmaceuticals and then the intellectual know-how is turned over, free of charge, to private industry so that it can market these drugs under 20 years of patent protection and then make a fortune at the cost of the American people.” I would add that these fortunes are also often at the expense of other nations as protection of these patent rights is the driving force behind misnamed “free trade” agreements.

Inequality and personal bankruptcies are not the only evils that flow from this system. CEPR economist Dean Baker points out that the inordinate profits flowing from these monopoly protections create an incentive to hide adverse reactions to drugs. Companies are occasionally fined, but the costs are the proverbial drop in the bucket.

Sachs advocates a model for vaccine development that gives primary responsibility for funding and development to the NIH. Private companies could manufacture and distribute, but under strict requirements and in a competitive marketplace. He reminds us that one of medicines great triumphs, the near eradication of polio, emerged from leadership of a not for profit foundation, the March of Dimes in funding Jonas Salk’s development of a polio vaccine. Of course these were different times. A public sector that had not only won a war and overcome a depression expressed and nurtured a broad if imperfect public spirit. Nonetheless there are still reasons to think that a well funded and fully transparent and widely argued over CDC and NIH could sustain and be sustained by democratic commitments even in troubled times. Our neighbor to the North provides one suggestive example.

Brown University political theorist Bonnie Honig, citing work by Elaine Scarry, pointed out “the United States does little to prepare for emergencies. We have phone alerts and emergency broadcast signals, earthquake and fire drills in schools, but there are no detailed state or federal government plans that we all know of for orderly evacuation or shelter provision. …

By contrast,] Scarry points to certain communities in the Canadian province of Saskatchewan, which have regular emergency drills and reviews of billeting and supplies to prepare everyone for emergencies. These preparations do still more: they also habituate people to thinking and acting like a public, with shared concerns, responsibilities, and attachments to public things and purposes. The lack of emergency infrastructure in the United States leaves us on our own, to fend for ourselves.”

Here in the US we are suffering from a lack of public health infrastructure. President Trump has spent a substantial part of his presidency demeaning and defunding the CDC. The consequent deficiencies do more than diminish our efforts to contain disease.. They erode faith in democracy itself.

In concluding his commentary on the drug plutocracy Sachs recalls a famous exchange between Edward R Murrow and Jonas Salk. Today we could hardly imagine a journalist asking the question or a corporate scientist providing the reply. When asked by CBS anchor Edward R. Murrow, “Who owns the patent on this vaccine?” Salk responded, “Well, the people I would say. There is no patent. Could you patent the sun?” Today we may require a reinvigorated public sector to save the sun from this fate.

Democracy Now! “Physician: The rich can’t buy their way out of a coronavirus pandemic”