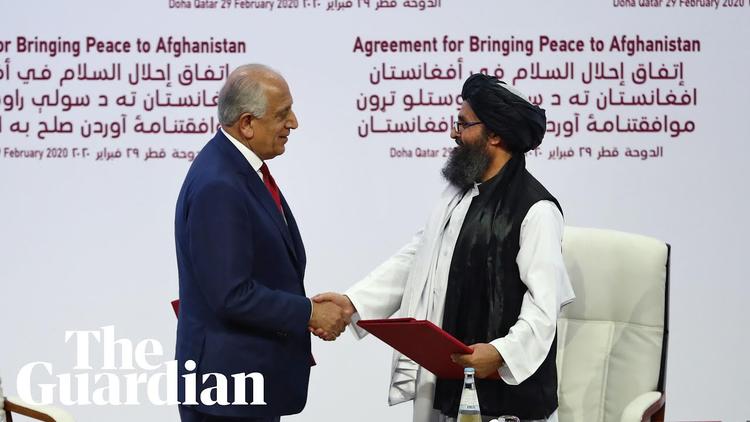 The US has signed an historic agreement with the Taliban that sets Washington and its NATO allies on a path to withdraw their military forces from Afghanistan after more than 18 years of unceasing conflict.

It is now hoped the deal will lead to a more complicated process of negotiations between the Taliban and Afghan government – starting as early as next week – to work toward a complete ceasefire and new political roadmap for the country.

This is critically important because until now, the government has been absent from the peace process at the insistence of the Taliban.

The opening of this window to end one of the world’s most debilitating and protracted conflicts has been welcomed by many US allies, including Australia.

Embed from Getty Images
Taliban negotiator Abbas Stanikzai (3rd-L) sits with other Taliban members during the second day of the Intra Afghan Dialogue talks in the Qatari capital Doha on July 8, 2019. (Photo by KARIM JAAFAR/AFP via Getty Images).

However, many seasoned observers, including prominent American politicians and former diplomats and military leaders, are concerned the agreement concedes too much to the Taliban without requiring it to make any substantive commitments to ensure a genuine peace process.

The deal has completely sidelined the Afghan government and civil society and does not provide any explicit references, much less guarantees, for the protection of human rights in Afghanistan, especially for women and minority groups who were suppressed and persecuted by the Taliban.

Indeed, cracks have already begun to emerge in the deal. On Monday, the Taliban refused to take part in the intra-Afghan talks until the government released 5,000 Taliban prisoners, which President Ashraf Ghani has refused to do.

As a result, many Afghans are worried that rather than being the start of a comprehensive peace process for the country, the deal is merely a cheap withdrawal troop agreement intended to serve US President Donald Trump’s political interests during an election year.

Will the Taliban sever ties with terror groups?

The agreement is to be implemented in two separate processes. The first commits the Taliban to take measures to prevent al-Qaeda and other terror groups from using Afghanistan as a safe haven from which to threaten the US and its allies.

In return, the US and NATO have agreed to a complete withdrawal of all forces from the country within 14 months. It is scheduled to begin with the departure of over 5,000 troops and the closure of five military bases within 135 days of the signing of the agreement.

In the short term, the Taliban will likely tactically reduce its relations with certain elements of the local al-Qaeda network to demonstrate its commitments under the deal. But its relationship with these international terror groups is far more complicated and nuanced than the agreement recognises.

Research has shown the Taliban sees foreign militant groups as valuable allies due to their shared ideologies and longstanding material support for one another. This is provided these groups don’t directly challenge their power in the country.

This explains why the Taliban’s ties with al-Qaeda are so enduring, despite the US-led military campaign in Afghanistan aimed at dismantling the terror group. In particular, the Haqqani Network, a semi-autonomous component of the Taliban movement, has a long history of working closely with al-Qaeda and other groups.

On the other hand, the Taliban has fiercely resisted groups such as the Islamic State when it has threatened to seize Taliban territory.

As a result, the Taliban is likely to intensify its attacks on already weakened Islamic State affiliates in Afghanistan, rather than going after more dispersed elements of al-Qaeda under the agreement with the US.

But verifying the group has followed through on its commitment to completely sever ties with al-Qaeda and other terror groups may prove to be extremely difficult in the long run. Especially after the withdrawal of the US military and intelligence assets from the region.

Many challenges lie ahead in peace talks

For negotiations between the Taliban and Afghan government to succeed, both sides will need to find a compromise on the future of the country’s political system. This would require the Taliban to abandon its goal of restoring its ultra-conservative Islamic Emirate, which it sought to establish from 1996-2001.

The Taliban will also need to make robust guarantees for basic civil and political rights and to shut down its safe havens for militants across the border in Pakistan.

The Taliban has so far steadfastly refused to directly negotiate with officials of the Afghan government, which it describes as an illegitimate imposition of western powers.

The divisions that have intensified within the government since September’s presidential election will only serve to strengthen the Taliban’s position. And the implementation of the first stage of the US military withdrawal is likely to further weaken the government and embolden the Taliban.

Consequently, it is highly doubtful a complete and durable political settlement will be achieved within the 14 months of the complete foreign troop withdrawals.

Yet, despite the failings of the government, the public has not shifted its support to the Taliban. Last year, a national survey by the Asia Foundation found 85% of Afghans had no sympathy for the Taliban.

Taliban negotiators have said they are not seeking to monopolise power and are willing to recognise the rights of women and freedom of expression according to Islam. But given the group’s draconian interpretation of Islam, it is far from certain it is ready to recognise the vibrant role Afghan women now play in the public sector and civil society.

The rights of ethnic and religious minorities also remain a concern. The Hazaras, for one, have been relentlessly persecuted by the Taliban since the 1990s.

Finally, the Taliban’s sanctuaries and power bases in Pakistan will undoubtedly remain a sticking point in any peace talks on the future of Afghanistan. A durable peace is unlikely to materialise when an insurgent group can wage wars from across the border with impunity and backed by elements of a powerful neighbouring state.

Despite these challenges, the fact a peaceful resolution to the war is on the agenda of regional and global powers is a positive development. A genuine peace is likely to be the outcome of trials and errors, a long process that requires patience and sustained international commitment.

Guardian News: “US and Taliban sign deal to withdraw troops from Afghanistan”