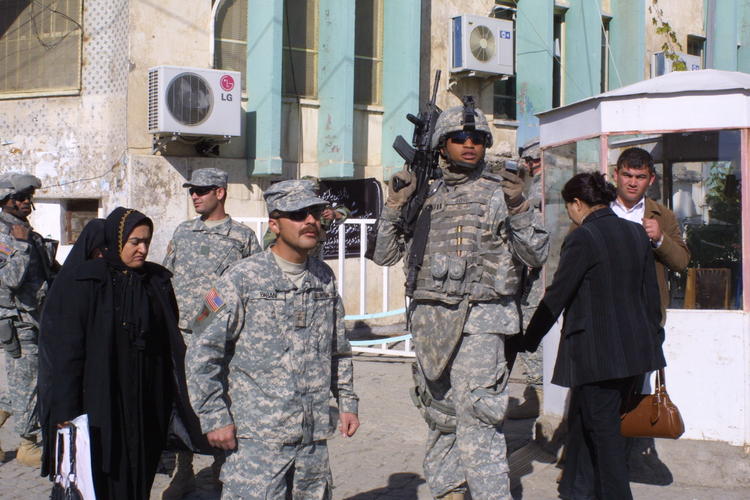 Leaders in Washington and Tehran say they don’t want a full-scale war, but they are playing a dangerous game.

San Francisco (Foreign Correspondent) – While the world focuses on the coronavirus pandemic, tensions between the US and Iran are heating up.

The two countries are engaging in tit-for-tat military attacks that threaten a wider war. In mid-March, Washington officials accused an Iran-allied militia of launching rockets at a US military base in Iraq, killing two American soldiers and one British soldier. The Pentagon retaliated with a missile strike against the group Kataib Hezbollah in Iraq, killing militiamen, five Iraqi servicemen, and a civilian who were also at the base. On March 26 rockets once again hit near the US Embassy in Baghdad’s Green Zone.

The Pentagon sent two aircraft carriers to the region, claiming in a March 19 Navy statement that the US is protecting “freedom of navigation and [the] free flow of commerce.” Threatening a possible military attack on Iran, the Navy said the carriers “provide the combatant commander significant striking power for contingency operations.”

Leaders in Washington and Tehran say they don’t want a full-scale war, but they are playing a dangerous game. And the people of Iraq will suffer the consequences.

“Iraq has become a proxy war between the US and Iran,” says Raed Jarrar, an Iraqi-born human rights activist and writer based in Washington, D.C., in a phone interview. “Iraq is paying in blood and treasure.”

How it all began

In 2018, US President Donald Trump unilaterally pulled out of the nuclear accord with Iran and imposed harsh sanctions on Tehran. Iran waited a year to see if the European signatories to the accord—Britain, France, and Germany—would live up to the agreement by engaging in normal trade and investment. The Europeans knuckled under to Trump, so Iran decided to slam down its fist.

By mid-2019, oil tankers from US-allied countries came under attack. Iran seized a U.K. tanker and shot down a US drone. Iran also pulled back from some provisions of the nuclear accord.

At the end of 2019, Iran-allied militias launched rocket and mortar attacks on US bases in Iraq. Washington portrays these militias as tools of Iran. Groups such as Kataib Hezbollah do receive arms and training from Iran, but they are also now part of the Iraqi army.

The US picks its favorites within the Iraqi military as well, arming and training Kurdish militias and Iraqi army special forces.

Kataib Hezbollah and similar Iran-allied militias initially bore the brunt of fighting ISIS, according to Patrick Theros, a former US ambassador to Qatar and now a strategic advisor to the Gulf International think tank in Washington, D.C.

“The militias are not Iranian controlled,” Theros tells me in a phone interview. “The Iranians can’t just send an order and be confident it will be obeyed.”

But the Trump Administration acts as if the militias are extensions of the Iranian Revolutionary Guard, as seen in the January 3 assassination of Iranian military leader Qasem Soleinmani and Iraqi militia head Abu Mahdi al-Muhandis.

Those assassinations were a huge mistake, according to Nader Talebzadeh, an analyst and influential TV host in Iran. “What the American President did was unify the Iranian people and took things to a different level,” he tells me in an interview.

Ordinary Iraqis were even more outraged at the murder of al-Muhandis, who was an extremely popular leader in the fight against ISIS, according to Theros.

“We’re killing Iraqis, not Iranians,” Theros says. “That affects the attitudes toward us.”

The Iraqi parliament passed a resolution calling for the withdrawal of all foreign troops. Iraqi military leaders demanded that Washington get permission from top Iraqi leadership prior to launching another retaliatory raid.

Trump responded to these assertions of Iraqi sovereignty by threatening to impose harsh sanctions and seize Iraq’s central bank reserves held by the Federal Reserve Bank in New York.

“That makes us look like an occupying force,” Theros notes wryly.

Iraqis have plenty of legitimate complaints against their leaders in Tehran. Iranian troops entered Iraq to assist the fight against ISIS, but stayed to spread Iranian influence. Many resent Iran’s role in supporting brutal and corrupt Iraqi politicians.

Hundreds of thousands of Iraqis took to the streets in late 2019, protesting both the US and Iranian presence. Demonstrators burned down two Iranian consulates. Ordinary Iraqis were furious at the lack of electricity, water, and widespread government corruption. Iranian-allied militias and government forces brutally suppressed the peaceful demonstrations, killing more than 600 people and injuring tens of thousands.

The demonstrations forced the resignation of Prime Minister Mohammed Tawfiq Allawi on March 1. Adnan al-Zurufi was appointed the new prime minister, but parliament must confirm him by mid-April. Al-Zurufi had lived in the US for years and holds dual US/Iraqi citizenship. He returned to Iraq after the 2003 US invasion, and Washington installed him as governor of Najaf province.

Iraqi politicians are wheeling and dealing over al-Zurufi’s nomination. He has US backing and is hoping for Iranian support as well.

The opposition street protestors see al-Zurufi as part of the old establishment they oppose, but their numbers have dwindled. While thousands had occupied Baghdad’s Tahrir Square at the height of protests last year, only a few hundred remain today.

But Theros says the world shouldn’t write off Iraq’s protest movement. “Unless the government addresses the issues they were protesting, they will be back,” he says. “It’s gone dormant, but it’s not dead.”

Harsh, unilateral US sanctions have severely damaged the Iranian economy but have not changed Iran’s policies in the region. Nor has US military action.

Nevertheless, the Trump Administration is pressuring the new Iraqi prime minister to cut off imports of Iranian gas and electricity, in keeping with US sanctions. For the moment, Washington has given Iraq waivers to allow trade to continue. Many Iraqis don’t like Iran but the economies of the two countries are deeply intertwined.

“They can’t do it,” Theros says. “They have no choice but to choose Iran over the US.”

So the ball is in the US’ court. Trump can continue his “maximum pressure campaign” against Iran and face continued Iraqi attacks on US troops. Or he can back off to focus on domestic concerns and avoid a wider war.

Iranians can wait. They may yet see regime change in Washington this November, long before it comes to Tehran.