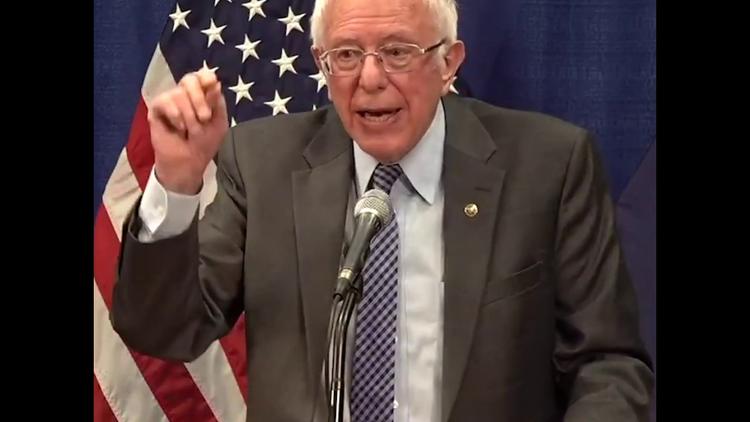 Chicago (Special to Informed Comment) – On Tuesday, I cast a joyless vote for the very much politically doomed Vermont Sen. Bernie Sanders in the Illinois primary, in an elementary school where hushed whispers and fearful glances had replaced the normal din of an election day. There was no one standing just outside the perimeter hustling me to vote for this or that candidate. There were no throngs of voters with whom to share that elusory joy in exercising your basic democratic rights. It was the first, and I hope the last, ballot that I ever cast wearing latex gloves. There are, I think, very good and important questions about whether this election should have been held at all.

But it was, and Illinois Democrats willing to risk getting the dreaded virus handed Sanders a decisive loss. Together with lopsided routs in Florida and Arizona (Ohio rescheduled its primary) this is, or should be, the end of the Sanders campaign. There are, frankly, no lessons to be learned here, nothing remotely generalizable. This was a race transformed, suddenly and inexplicably, at a critical moment by a terrible deus ex machina that threatens to inflict once-in-a-century damage on human civilization.

Whenever we talk about 2020, it will be in terms of before and after. Before the virus, there was a lively Democratic primary that began with more than 20 hopefuls, with many of the same fault lines, grievances and fears as 2016. After the virus, the remaining centrist candidates quickly and unexpectedly coalesced around former Vice President Joe Biden and dealt Bernie Sanders an almost unthinkable series of defeats in the Super Tuesday contests. Before the virus, this was a race dominated by a seemingly endless debate about health care policy and whether the United States should opt for a fundamental and far-reaching restructuring of its system. After the virus, there was hardly room for even trembling disagreement.

More importantly, as the scale of the Covid-19 crisis has dawned on a terrified public over the past two weeks, it became clear that a decisive majority of Democratic primary voters no longer had much of any interest in this contest. The measures put into place by states and cities, from shutting down restaurants, bars, schools, universities and public places to the shuttering of all major American pro sports, are so far outside the normal scope of imagination, so sudden in their obliteration of everyday life, so unsettling in their lack of even a rudimentary time horizon, as to annihilate all other concerns and considerations.

Over the past three Tuesdays, Democratic voters have made it clear that they want to consolidate around Biden, and they have done so in such staggering numbers as to make a Sanders delegate majority close to a mathematical impossibility. With many states in the coming weeks likely to punt their primary elections to early summer, and with Biden now holding double-digit leads in national primary polling, it’s not just that Sanders has no real path to the nomination. It’s that the park containing the path is closed. The race will be frozen with Biden holding a roughly 300-delegate lead that is insurmountable given the party’s proportional allocations rules even under normal circumstances. That is a shame, because Sanders has better plans for this crisis than Biden, along with a narrative that correctly blames the long-term hollowing out of the public sector and the gross failure of the neoliberal state to prepare us for this moment. We live in a wrecked society now being held courageously together by grossly underpaid grocery store clerks, harried Amazon delivery drivers and determined health care providers. In America, only the doctors and nurses receive their due, and even they are embedded in a tragically warped system that has led us to be nearly defenseless against a crisis that scientists have been warning us about for decades.

You don’t have to think that single-payer health care is the answer to our every problem or believe that a magic wand can be waved to bring it into existence to see that Sanders is the only candidate left in the race capable of seeing this fallen state for what it is and pursuing policies to remedy it. Sanders offers us a vision of society as it might be. Biden extends the nostalgic promise of returning us to a recent past that is already buried much deeper than he and his supporters believe it is. Think of it this way: the political class in this country is so fundamentally broken that they have already wasted precious days debating half-measures that no sensible economist believes will be remotely sufficient to prevent a massive economic collapse.

Nevertheless, it was not meant to be for Bernie this year. There is no sensible argument for staying in the race now that he needs to win more than 63% of the delegates to get to a majority. There will be no repeat of 2008 and 2016, when trailing candidates floated the idea of flipping the so-called ‘superdelegates’ at the convention and reversing the popular will of the voters. Due in large part to pressure from the Sanders campaign itself, the DNC changed the rules so that superdelegates can’t vote on the first ballot. There isn’t going to be a second one, so there will be no one inside the party left to persuade.

A zombie campaign premised on amassing delegates to influence the party’s platform at the convention is not worth running and is certainly not going to inspire the kind of donations he would need to compete in the remaining states. The platform itself is a hollow prize anyway. No one reads or cares about it, the nominee isn’t bound by it and before the ink is dry, Biden and his team will have taken over the party.

More than ever, Sanders is actually needed as a progressive leader in the Senate, to help shape the coming bailouts and spending packages in a more humane direction. He himself seemed to acknowledge this obliquely yesterday, when he snapped at a reporter asking whether he would drop out: “”I’m dealing with a f—ing global crisis,” he told CNN”s Manu Raju. “Right now, I’m trying to do my best to make sure that we don’t have an economic meltdown and that people don’t die. Is that enough for you to keep me busy for today?”

The best thing Sanders can do for the American people is dedicate himself to pushing the coming bailouts and stimulus packages and emergency response plans in as progressive direction as possible from his influential perch in the Senate. He’ll be much less effective at that if he’s halfheartedly campaigning to compete in primaries that might not happen for months. And as much as it comes as a disappointment to a progressive movement that just weeks ago seemed to be on the verge of capturing the Democratic Party’s nomination, this thing is over and the sooner Biden can start fundraising for the general election the better. He is not the ideal vehicle to lead the party through a historic crisis, but Donald Trump has proven again and again during this unfolding ordeal that there is an abyss where the president should be, a vacuum of moral, political and administrative leadership that may get hundreds of thousands or even millions of people killed. Fighting a two-front war against the president and the virus is enough. The third front – the primary – needs to be shut down, and progressives need to lick their wounds and hope there is something left of society to fight for in 2024.