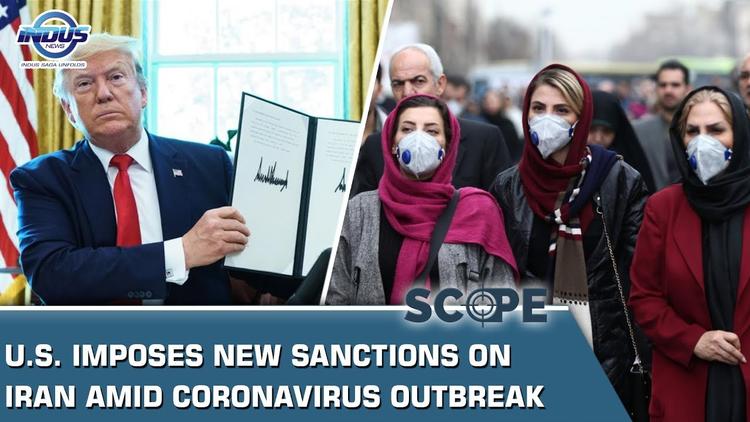 Ann Arbor (Informed Comment) – Courtney Kube, Carol E. Lee and Kristen Welker at NBC News report that Trump refused to bomb Iran last weekend for fear it would be a public relations disaster given international sympathy for that country’s coronavirus plight. It appears that some officials had considered bombing Iran in response to Shiite militia attacks on al-Taji base north of Baghdad in Iraq that killed two US military personnel and left several wounded.

One thing to say is that there is no particular reason to believe that the Iraqi militias, including Kata’ib Hizbullah (Brigades of the Party of God) struck in coordination with Iran. They wanted revenge for the US assassination on January 3 of Gen. Abu Mahdi al-Muhandis and for Trump’s bombing of Kata’ib Hizbulah bases. Trump blamed KH for a rocket attack on a Kirkuk base last fall that killed a US civilian contractor, but the Iraqi military disagreed and blamed that attack on ISIL.

The other thing to say is that if Trump made the statement attributed to him, it is another in an almost infinite chain of shameful utterances, each more shameful than the previous. Trump would have apparently been happy enough to risk war by bombing Iran for an attack carried out in Iraq by Iraqis. He was only deterred, he said, by the prospect of bad press given that Iran is prostrate with a coronavirus pandemic.

Reuters reports that the death toll in Iran from Covid-19 has risen to 1,284, and infections to 18,407. The country’s ministry of health spokesman, Kianush Jahanpur, is quoted as saying that another person dies there every 10 minutes now and every hour sees 50 people infected.

Researchers at Sharif University of Technology have modeled likely deaths and say Iran could be stricken with as many as 3.5 million dead.

Trump’s secretary of state Mike Pompeo just announced that the US would actually tighten its economic and financial blockade on Iran. Iranians are already saying that US Treasury Department restrictions on bank transfers have made it impossible for them to buy needed medicines, tests and medical supplies. The US does not prevent medicine from going to Iran, it just makes it impossible for Iranians to afford them or for the international banking system to handle the money exchanges necessary to buy them.

The US and Iran are not even at war, but if the US did to any country with which it was at war what it is doing to Iran, it would be a war crime (you are not allowed to inflict massive harm on non-combatant civilian populations even in war, according to the Geneva Conventions, to which the US is signatory).

It seems to me that the US Department of Treasury officials who are preventing Iran from transferring the funds to buy these crucial medical materials are guilty of genocide.

We know that the United States is lacking in enough masks, latex gloves, hospital beds and respirators to face Covid-19 adequately. But what if this were the fault, not of a neoliberal order that skimps on healthcare so that our billionaires don’t have to pay taxes, but of a foreign country interfering with our imports of needed medical supplies? What would Americans think of that foreign country? What would they want to do to it.

It is necessary to remember the sequence here. In 2015 Iran mothballed 80% of its civilian nuclear enrichment program and accepted severe measures that made it impossible for them ever to decide to militarize their nuclear program. In return, they were to see all economic sanctions lifted. After the US signed the Joint Collective Plan for Action or JCPOA, the Republican Senate never allowed US sanctions to lapse, and constantly threatened European concerns with heavy fines and sanctions if they did business with Iran. So Iran gave up everything and got almost nothing. Nevertheless, the government faithfully complied with the deal. Then in 2018 Trump abruptly breached the treaty that the US signed, despite Iran’s compliance with all of its provisions, and slapped the most brutal sanctions on Iran ever applied by one country to another in peacetime. Trump crippled Iran’s oil exports and disabled its access to the international banking system, seeking to throw its economy down to fourth world levels. Trump has no warrant for doing this to Iran in international law, in any resolutions of the UN Security Council or even in US law. His economic blockade of Iran is the policy of one man in the White House.

Trump’s sense that the world does not stand with him in his Maximum Pressure campaign comes from Europe’s steadfast refusal to breach the 2015 JCPOA or Iran deal. Even the United Kingdom, where PM Boris Johnson is relatively close to Trump, has quietly lobbied Washington to relent on some sanctions so as to allow Iran’s authorities to deal with the Covid-19 crisis. As for the European Union, it is actively seeking means to break the US sanctions on Iran.

To be sure, Trump is only partially responsible for the deaths in Iran. (Would that make him a killer of only a million and a half people?). Even if the government of the ayatollahs had been free to import medical supplies freely, its ayatollahs wouldn’t have done so at the beginning of the crisis. The held parliamentary elections, and then commemorated the 41st anniversary of the Islamic Revolution on February 1. Both events brought large numbers of people together. All that celebrating was deadly to the elite. By early March, a month later, 8% of Iran’s parliament was dead, along with dozens of other high officials. One of the problems with being ruled by a clerical corps is that they often are not big on science. Clerics in the holy city of Qom insisted that it was safe for crowds to gather at the tombs of Shiite saints because the saints’ holiness would protect people from the virus. Only when people started sickening and dying did the clerics back down before the insistent entreaties of the scientists and physicians, who are often very high powered even if subordinated to the religious.

Today is the Iranian New Year, ordinarily a joyful occasion for reflection on renewal and rebirth. This year it is far to overshadowed by death for that.