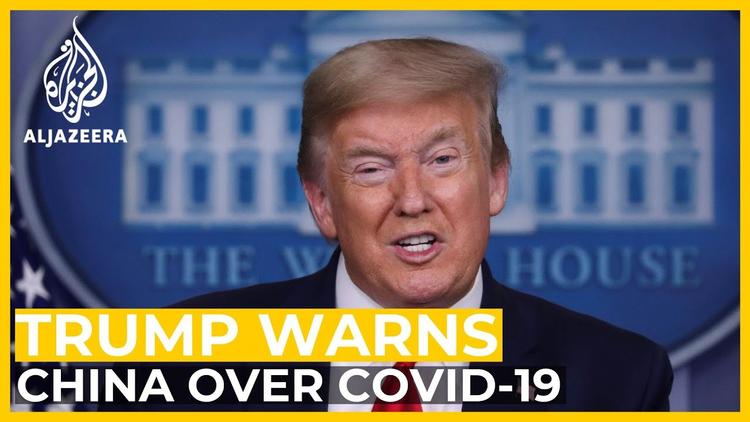 The Republican Party is trying to shift blame for President Donald Trump’s disastrous coronavirus policies onto China. Chinese communists, Republican leaders claim, hid the pandemic from the public, allowing it to spread worldwide.

Trump has even given credence to the conspiracy theory that China intentionally developed the virus in order to kill Americans.

Scapegoating China serves a twofold purpose: It distorts China’s actual progress in combating the pandemic and aims to help Trump get re-elected.

“Trump has always been successful when he’s had a bogeyman, and China is the perfect bogeyman,” Republican strategist Chris LaCivita tells The New York Times.

Unfortunately, many top-level Democrats, including the party’s presumptive nominee, Joe Biden, are competing with Republicans on who can bash China harder.

“Trump rolled over for the Chinese,” a narrator intones on a recent Biden campaign ad, “Trump praised the Chinese fifteen times in January and February as the coronavirus spread across the world.”

The bipartisan China bashing is one more indication of the decline of the US empire. China has quickly grown to be the world’s second largest economy and is now pulling through the pandemic in far better shape than the United States.

As of April 22, China had more than 82,000 coronavirus cases and more than 4,600 deaths, and had gone six consecutive days without a COVID-19 death. The United States, a country with about one-fourth China’s population, had nearly 850,000 cases and more than 47,000 deaths. (While China has been accused of undercounting its casualties, so are most countries in the world, including the United States, according to a survey in The New York Times.)

Trump is just playing “political tricks,” says Andy, a Mandarin language teacher in Shanghai, who asked that his last name not be used to protect his safety. “Trump and his officials knew how serious the virus was. It’s their own fault.”

The first COVID-19 death appeared in the city of Wuhan on November 6, 2019, according to a timeline constructed by pro-China blogger Nathan Rich. But doctors assumed the death was from pneumonia. By December, a few more residents were hospitalized in Wuhan. But it wasn’t until December 26 that local doctors discovered what they thought was a variant of SARs, the deadly virus that swept through Asia in 2002-03. It was actually the coronavirus.

On December 31, medical officials notified the World Health Organization about the existence of the new virus, and Chinese TV first reported the outbreak. On January 1, authorities closed the live animal market in Wuhan, which was suspected of being the virus’s origin point and had become a hotspot.

Chinese scientists initially thought the virus couldn’t be transmitted between humans, but on January 15, they confirmed that it could.

By January 23, China’s central government ordered a total lockdown of Wuhan, followed quickly by quarantines in other major cities. Residents were not allowed to travel in or out of Hubei province, where Wuhan is located. They were restricted to their own homes and even had food delivered. It was the largest cordon sanitaire in world history, according to a definitive study in Science magazine.

In retrospect, local authorities should have moved more quickly to identify the new virus and impose a quarantine. On January 19, for example, tens of thousands of people participated in a Wuhan municipal potluck dinner, which helped spread the virus. They should have recognized much sooner that the virus spread human to human.

However, when it comes to dealing with the pandemic, the United States’ record is far worse.

Here, the first COVID-19 case was confirmed in Seattle on January 21. But officials in Washington State didn’t declare a state of emergency for another month (February 21), and it took California two months (March 19) to order people to stay at home. To this day, some states have still not declared stay-at-home orders, and the virus continues to spread.

China has surely engaged in some reprehensible behavior while combating the pandemic. A doctor who originally warned friends about the new virus was forced to sign a letter recanting his claim; he later died of COVID-19. Africans living in China complain of evictions and other acts of racism due to government warnings that foreigners may carry the coronavirus.

But from an overall public health perspective, China’s actions, according to the study in Science, saved many lives. “The national emergency response appears to have delayed the growth and limited the size of the COVID-19 epidemic in China, averting hundreds of thousands of cases by February 19.”

The US government and mainstream media attacks against China began almost immediately. At first, China was criticized for not doing enough to stem the epidemic. Then it was accused of going too far and violating civil liberties. Meanwhile, Trump and his acolytes at Fox News claimed the virus was no more serious than a normal flu.

This week, two US states, Missouri and Mississippi, filed lawsuits against China, alleging that the nation failed to take appropriate actions to stop the spread of the coronavirus.

Bring in the clown

China-bashing has even spread to popular culture. HBO comedian Bill Maher insists on calling the coronavirus the “Chinese virus.” On his weekly show aired April 17, the sometimes liberal, sometimes libertarian comedian insisted that advocates of political correctness were preventing use of a perfectly appropriate name.

“Scientists, who are generally pretty liberal, have been naming diseases after the places they came from for a very long time,” said Maher, citing examples of MERS (Middle East Respiratory Syndrome) and Ebola, named after the Ebola River.

While some diseases are named after locations, others are not. SARS stands for Severe Acute Respiratory Syndrome and then there’s H1N1, or the swine flu. Interestingly, the infamous “Spanish” flu of 1918-19 did not originate in Spain. US press censorship prohibited coverage of the flu, which in the US began at an army base. Because Spanish newspapers were the first to cover the pandemic in depth, people assumed it began there.

The Trump Administration is promoting a similar shift-the-blame tactic, promoting the use of the term “Chinese virus” and advising State Department officials to accuse China of orchestrating a cover-up. “Everything is about China,” one official told The Daily Beast. “We’re being told to try and get this messaging out in any way possible.”

I pity US diplomats forced to defend the Trump Administration’s mishandling of the coronavirus. We’re a rich nation with the most powerful military in history. Yet we can’t protect our own people in a health emergency.