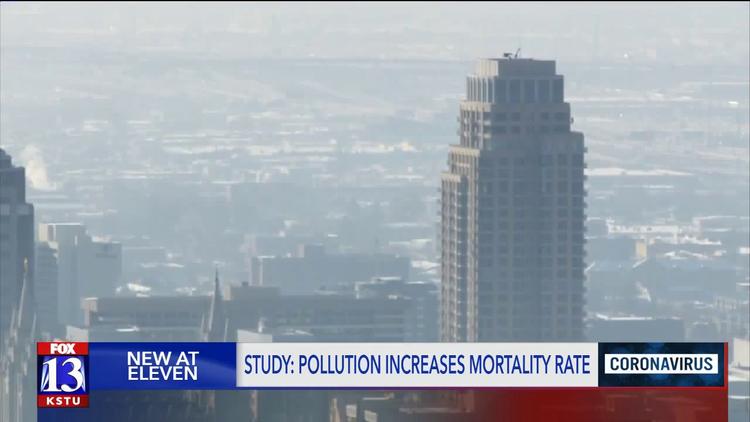 Ann Arbor (Informed Comment) – Air pollution, producing medical conditions such as asthma and other lung problems as well as heart disease, is responsible for some of the thousands of coronavirus deaths in the United States. This, according to a just-published Harvard study, which is well summarized by Matthew Yglesias of Vox. Yglesias notes that Trump’s response to the pandemic has been to abolish clean air regulation, which is exactly the opposite of what we should be doing.

City-dwellers around the world are astonished to see how clean their air suddenly became once people stopped burning so many fossil fuels by driving gasoline vehicles for hours a day and powering stores with coal.

Clean air is not just a beautiful thing. It is necessary for our health. A study published last November in an open-access journal issued by the American Medical Association found that breathing polluted air full of small particulate matter kills some 200,000 people a year in the U.S. even where the level of pollution is below the limits set by the Environmental Protection Agency standards.

Particles or droplets less than 2.5 microns across, or thirty times smaller than a strand of hair, are implicated in a range of health disorders and even in declining intelligence in highly polluted environments.

In fact, the Guardian headline from 2018 was Air pollution causes ‘huge’ reduction in intelligence, study reveals . Damian Carrington and Lily Kuo wrote that breathing in polluted air so interferes with brain function that doing it regularly is like losing a year of education. I know people sometimes blow off their last semester of college, but apparently they lose both semesters if they live in a city with heavy air pollution. And that’s not counting full-blown dementia, in which dirty air caused by burning gasoline and coal is also implicated.

Rosie McCall at Newsweek pointed out that the JAMA Network study found that air pollution causes death from heart disease, obstructive pulmonary disease, lung cancer, pneumonia, and type 2 diabetes, as well as brain damage caused by damaged blood vessels closing off oxygen to the brain. These six fatal diseases were known to be the result of breathing polluted air. But in addition, they were able to show that breathing in micro-particles over time also causes dementia, high blood pressure, and chronic kidney disease, all of which are also killing people.

Coal companies and Big Oil like ExxonMobil and all those fracking companies are thus killing off a million Americans every five years. For the past 20 years Americans have been freaking out about terrorism that might kill less than a hundred people a year, but they’ve been happy to have a fifth of a million of their fellow citizens polished off by the burning of fossil fuels annually.

The situation is, of course, much worse than this study shows. Because not only does driving gasoline cars and heating your home with coal make you stupid and sick, it is also wrecking the planet by spewing powerful greenhouse gases into the atmosphere, where they trap the sun’s energy and won’t let it radiate back out into space, heating up the earth. Global heating causes wildfires (which also throw up particulates into the air), drought, more severe hurricanes, and deadly sea rise and storm surges. Carbon dioxide is absorbed up to a certain limit by the sea, at the cost of making the sea acidic and threatening a huge kill-off of the fish on which 10% of humankind live.

The Scientific American reports that researchers estimate that some 150,000 people are being killed annually by the climate emergency around the world. The number is expected to double by 2030.

Proportionally speaking, the US is 4.2% of the world’s population, so a little over 6,000 Americans are already being killed annually by global heating. That number will mount exponentially through the 21st century.

The burden of all this disease and death is falling disproportionately on the poor and in the US on African-Americans, who are shunted by discrimination into the most polluted and least desirable housing. Who lives near a coal plant?

As huge numbers of new lines of affordable electric cars come online over the next five years, everyone who can afford one should go electric. As we green the electricity grid and phase out coal, the EVs will save the lives of literally hundreds of thousands of Americans a year, not to mention flattening the climate emergency curve for the next generation.