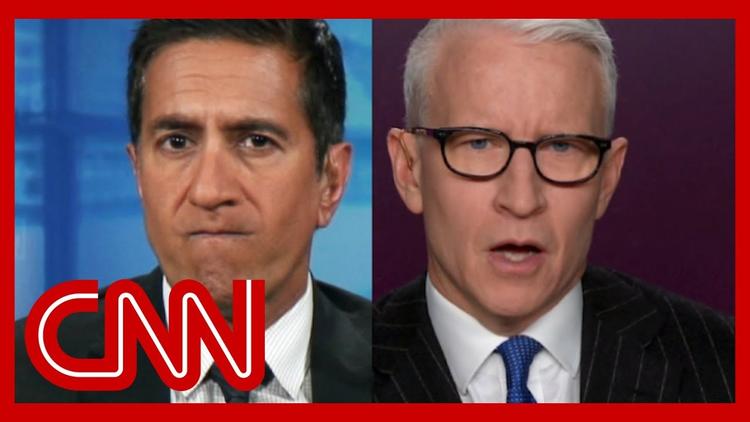 Ann Arbor (Informed Comment) – Georgia Gov. Brian Kemp, whose only advantage in life appears to be being a white male who has failed upward all his life, announced on Thursday that he was finally implementing a shelter-in-place order for his state of 10.5 million people. He said the reason for his about-face after two and a half months of making light of the “panic” around the coronavirus, was that he had just discovered that people without symptoms could have the virus and spread it to others.

The stupid hurts my head. And not just mine.

Dr. Sanjay Gupta, a Georgia resident, was open-mouthed in disbelief, and the usually polite and neutral physician said, “this is inexcusable.”

Georgians who voted Kemp in overlooked his idiotic and offensive racism and the wily way he used his office as Georgian secretary of state to suppress the African-American vote to cheat Stacy Abrams of a victory.

This is how Kemp campaigned for governor:

Maybe when thousands will die of a coronavirus, blowing up government spending that is necessary to care for the people, ripping up government regulations that protect the lives of the people, and denigrating the nearly 1/3 of American doctors who are immigrants, are not such bright ideas.

Because Kemp let the coronavirus run wild all this time, it will kill far more people than if he had early on adopted a shelter in place policy or had ordered large-scale testing and contact tracing. He not only did nothing. He ridiculed people like the mayor of San Francisco, who on March 9 closed down the Bay Area. San Francisco has a fraction of the cases of New York.

Likewise, Florida governor Ron DeSantis, a disgusting fascist with close connections to white supremacists who is accused of engaging in voter suppression, sat on his hands and did nothing. He allowed Spring Breakers and Megachurches and Disney World crowds to spread around the deadly virus that fills up your lungs with what looks on x-rays like broken glass and has you spitting up pink froth before you drown in your own mucous. The elderly are more likely to die of the thing, so of course what you want is a do-nothing governor of the state with a big elderly retired population. DeSantis has the future deaths of thousands of Floridians on his hands. When he finally did issue a shelter in place advisory, he exempted churches, playing to evangelicals who believe they are immune to the laws of biology because of their fanaticism. They aren’t immune, and when they get infected they will be disease vectors to the rest of us, i.e. they will be murderers.

Note that viruses are not limited by state. If Kemp and DeSantis have created huge pandemic waves, they will radiate out to everyplace else in the country, and make the rest of us have to shelter in place much longer than would otherwise have been necessary. Imagine how those self-absorbed Spring Break students or Disney crowds spread the disease back home on their arrival.

I’m 67 and a cancer patient, so it is possible that the Republican stupidocracy will kill me personally.

Kemp and other Republican governors who dragged their feet were just following their Fuehrer der Trump’s diktat.

Not only did Trump blow off his intelligence and health experts in January, February and the first half of March, refusing to do anything at all about the looming coronavirus catastrophe, but most Republican governors behaved the same way. Leaks suggest that Trump took no steps because he feared a panic would sink the stock market, send the economy into a tailspin, and endanger his chances of reelection. He dismissed the pandemic as just 15 people. It was a hoax. It was just the flu. You’ll be fine. It had gone away. It would dissipate by April. Shutting down the economy was a cure worse than the disease.

If Trump had swung into action in late January or at least sometime in February, as any sane, smart person would have, thousands of American lives could have been saved. In particular, if Trump had adopted the Singapore and South Korean model of large-scale testing and then tracing all the contacts of anyone testing positive, we might have been spared our current national house arrest.

The mayor of New Orleans says she would have canceled Mardi Gras in late February if she had been briefed by the Federal government on the dangers of the pandemic. The main response of some Republican senators who were briefed seems to have been to come out in public and tell everyone there was nothing to worry about and then to quietly do some insider trading on the stock market to try to make their portfolios pandemic-proof. The rest of us were not given that opportunity.

South Korea had its first case on precisely the same day as the United States. Yet the trajectory of the pandemic in the two countries has been completely different, reflecting well on South Korea and making some wonder whether the United States is even a country at all any more, or just a Pentagon, a flag, a stock market, and masses of low-wage workers with inadequate or no health insurance living moment to moment.

American racism has always been ugly, but the inability to recognize that we haven’t been as savvy in dealing with this challenge as South Korea and Singapore is monstrous. South Korea is also a democracy, and its politics are pretty conservative, so it tells you how far Right the Republican Party has gone that its only response to the biggest public health policy of our lifetimes has been to try to avoid having government look like it can do something useful, avoid instituting any important regulations, avoid spending government funds, and generally avoid taking care of the people as opposed to taking care of the big corporations. Ironically, this litany of GOP fetishes was ultimately most deadly of all to business.

I have to stop writing now. The pain of the stupid is like a migraine.