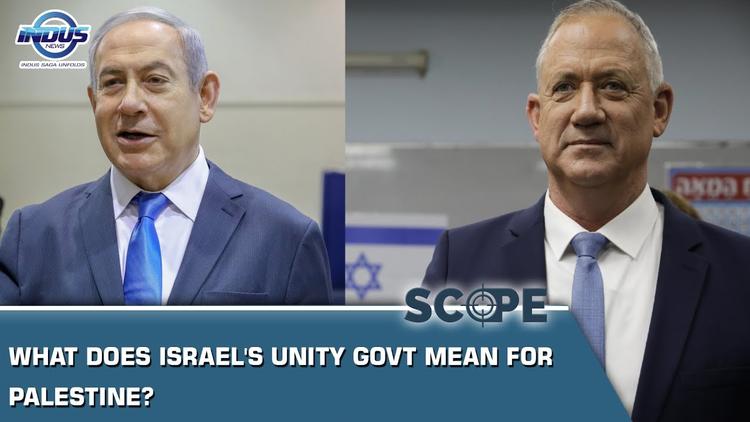 ( Middle East Monitor ) – When it comes to Israel, the international community has once again been exposed for the double standards and hypocrisy it reserves to support the rogue state. Many so-called western democracies have fallen over each other to offer congratulations to an Apartheid state for forming a government that will entrench occupation, oppression, racism and land theft.

Settler-colonialism on steroids has thus been praised for spawning two politicians — both of whom are suspected war criminals — who have supposedly pushed personal animosity and ambition aside to form a government that will, from 1 July, begin to annex large swathes of illegally-occupied Palestinian lands in defiance of international law and conventions, aided and abetted by the US. This in itself is outrageous.

The longest serving Israeli Prime Minister and leader of the Likud party, Benjamin Netanyahu, has agreed to share a “unity government” with his rival and leader of Blue and White, Benny Gantz. Their agreement will keep the notorious racist Nation State Law which gives self-determination to some inhabitants of historic Palestine because of their religion and denies it to the rest. It further believes in the illegal settlement enterprise as a “national value”.

READ: Abbas warns US and Israel against annexation

The agreement also includes the application of Israeli Law to wide swathes of the illegally-occupied Palestinian land in the West Bank while US President Donald Trump is still in office. US Ambassador to Israel David Friedman will, bizarrely, be advising the Israelis on which parts of the West Bank to annex. Trump’s bankruptcy lawyer — he is bankrupt of ideas for peace — will be using his legal training, not to draft a peace agreement to end the conflict between Palestinians and Israelis and deliver some justice, but to breach international law.

Freidman has form. When Trump decided to recognise the illegal annexation of Syria’s Golan Heights he explained it thus: “I said [to Friedman] ‘How do you like the idea of me recognising exactly what we’re discussing?’ because I agree, you need it, you need the height.” The ambassador reacted, said Trump, “Like a wonderful, beautiful baby.”

A general view of the Israeli-annexed Golan Heights, which Israel seized from Syria in the 1967 Six-Day War. [JALAA MAREY/AFP/Getty Image]

A general view of the Israeli-annexed Golan Heights, which Israel seized from Syria in the 1967 Six-Day War. [JALAA MAREY/AFP/Getty Image]

Ambassador Friedman was one of the first to congratulate Israel on the formation of the Apartheid and annexation government. “Delighted to see that Israel’s two leading political parties, led by PM Netanyahu &amp; MK Gantz, have agreed to form a unity government,” he tweeted. “The United States looks forward to working closely with the new gov’t to advance our shared values and interests bilaterally and across the world.”

Israel’s main lobby group in the US is the American Israel Public Affairs Committee (AIPAC); it was just ahead of Freidman in its congratulations: “AIPAC welcomes the announcement of the agreement to form a new Israeli government. We congratulate Prime Minister Netanyahu and Lt. Gen. Gantz for their significant achievement in forging a broad-based coalition government.” It further lauded Israel’s “democracy”, claiming that, “Israel has once again demonstrated the resiliency and vibrancy of the only genuine democracy in the region.”

British hypocrisy was demonstrated by Middle East Minister James Cleverly MP. In a letter to the Chair of the Council for Arab-British Understanding on 16 April, he reiterated Britain’s official position that, “Any unilateral annexation would be contrary to international law.” Five days later, though, he tweeted his congratulations on the formation of the Israeli government without any caveats whatsoever: “Congratulations Israel on @netanyahu &amp; @gantzbe forming a new government. Keen to continue the important cooperation and build on our relationship. Looking forward to further and successes as we enter the 70th year of diplomatic relations!”

Meanwhile, the EU has not been very explicit in its congratulations. It did, however, warn Gantz about agreeing to annexation plans which, if put into action, would bring “a strong response” from Europe.

The Palestinian Authority was as reactive as ever. It has known that both this move and the timing were likely in order to take advantage of Trump’s first term in office, but appears to have no strategy of its own to deal with it. PA Prime Minister Mohammad Shtayyeh tweeted that, “The formation of an Israeli annexation government means ending the two-state solution and the dismantling of the rights of the people of Palestine as established under international law and resolutions.”

READ: Construction rate in Israel settlements up 25% since Trump took office in 2017

Chief Palestinian Negotiator Saeb Erekat added: “A government coalition based on a commitment to annex more occupied Palestinian territory is a threat to a rules-based world order in general, but to peace, security and stability in the Middle East in particular. Annexation means the end of any possibility for a negotiated solution. It is an international responsibility to hold the new Israeli government accountable and to demand full implementation of its obligations under international law and signed agreements.”

The PA’s strategy thus appears to be more of the same. Hold the international community responsible and reiterate that the answer has to be based on a two-state solution. What, therefore, does Shtayyeh’s reference to “ending the two state solution” actually mean? What is the alternative strategy now?

The past three years have seen tectonic shifts in the Palestine-Israel conflict, due mainly to Washington’s total bias in favour of Israel and a US President who has showered Israel with illegal gifts. While no Palestinian accepts Trump’s actions regarding Jerusalem, the UN Relief and Works Agency (UNRWA) or the annexation plans, there is a need to re-evaluate the Palestinian national project.

The PA’s good performance during the coronavirus pandemic has been welcomed widely by Palestinians. That same energy, commitment and resolve to deal with a worldwide health crisis now needs to be brought to bear on the political front. Are the Palestinian leaders in Ramallah and Gaza going to sit back and recycle statements about their respective strategies for peace when no one is taking any notice? Or will they now set in train a national dialogue that brings Palestinians across the world together to re-evaluate the situation and agree on a united way forward?

Having dealt with the potentially existential threat from the coronavirus, the Palestinian leadership needs to change course on the political strategy as a leadership for liberation, or face a very real existential threat. At that point a new leadership must emerge from the highly educated and steadfast Palestinian people, all 13 million of them across the world. That would be the best and most effective response to Israel’s Apartheid and annexation government and its hypocritical supporters.

What does Israel’s unity govt mean for Palestine? | Scope

Kamel Hawwash is a British Palestinian engineering academic based at the University of Birmingham. He is a commentator on Middle East affairs, Vice Chair of the British Palestinian Policy Council (BPPC) and a member of the Executive Committee of the Palestine Solidarity Campaign (PSC) and . He writes here in a personal capacity.