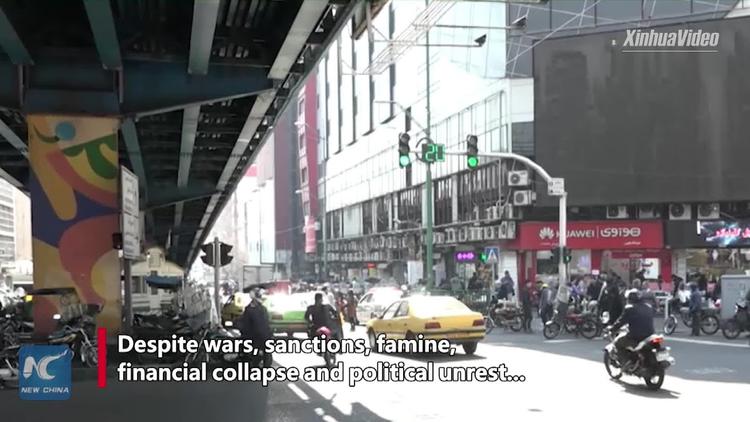 ( Middle East Monitor ) – Calls for China to be held to account for the spread of the coronavirus Covid-19 have the potential to push Washington and Beijing into a new Cold War. If this happens, the Middle East will find itself at the centre of events that are likely to shape the region for years to come, if not decades.

The signs are that what many describe as the charmed existence of the Chinese Communist Party over the past three decades, during which it has enjoyed all the benefits and suffered none of the costs of globalisation, is going to come to an abrupt end as the fallout from the global pandemic hits home. Anti-China feeling was gathering pace in America under President Donald Trump as the two countries became locked in a trade battle. Trump’s political base and the political right in general have a particular hostility towards the Communist Party in China, believing it to be the cause of their economic woes.

In their eyes, China’s transformation into the world’s workshop, which has enabled Beijing to lift more than 800 million people out of poverty, is an “economic miracle” that comes at great cost. The authoritarian communist regime has been the primary beneficiary of the global desire for consumer goods made by cheap labour leading to continuous economic growth. For many on the political right, the fact that corporations have taken supply chains offshore to China has decimated jobs at home, a belief that is responsible in part for the populist backlash in the West and elsewhere.

Trump ratcheted-up tensions with China by wasting no time in saying who he believed was responsible for the pandemic and described Covid-19 as the “Chinese virus” as soon as the disastrous impact on the US and the rest of the world became apparent. He had, of course, dismissed it previously as a “hoax”. Calls for hard economic decoupling from China get louder by the day, with mainstream news and respected analysts insisting that a return to business as usual with China is unthinkable.

This feeling is no longer the preserve of the right. “How China is planning to use the coronavirus crisis to its advantage” and “China is manoeuvring for international leadership as the United States falters” were just two of the many headlines reflecting the growing concern about Beijing and its culpability for the virus and its global impact.

One commentator forecast a more seismic shift. “What is fast unravelling is not only the hyper-globalisation of recent decades,” said philosopher John Gray, “but [also] the global order set in place at the end of the Second World War.” According to Gray, this crisis is a “turning point in history” which has “accelerated geopolitical change” that could ultimately end in the US losing its place as the protector of the liberal world order.

While suggestions — mainly from the right-wing media, it should be stressed — of China having to pay billions of dollars in compensation seem both premature and far-fetched, the predicted transformation as governments across the world seek to limit long supply chains and limit Beijing’s economic influence seems all but certain. Japan has already reacted, becoming the first country looking to ditch Beijing by paying billions of dollars to companies in an attempt to entice them back within its borders.

Such a change will have a major impact on the Middle East, largely because the US has become energy self-sufficient. This is a huge geopolitical shift. Other than ensuring Israel’s security and protecting its trade with the Gulf States — measured mainly in arms sales — there are very few pull factors left to justify the kind of security umbrella put in place by the US in the region since the Second World War.

The main motivation for America to maintain its global influence would seem to be to not concede any territory to Beijing and preserve its status as the world superpower, a status that’s measured in economic supremacy as much as ideology. It remains to be seen just how much longer the US will wish to remain the so-called “leader of the free world” and the protector of the liberal world order if the cost of doing so becomes unpopular among American voters in a post-pandemic system characterised by a rise in nationalism and state protectionism, less globalisation and the weakening of multilateral institutions.

Washington has already shown that it doesn’t have the stomach to do what is required. It has allowed its rival Moscow to increase Russian influence in the Middle East since 2015 and surrendered global leadership on Israel-Palestine by acceding to every Israeli demand with the so called “deal of the century” which we are supposed to believe is a “peace plan”.

Meanwhile, the region has become vital to China. Arab states are the main source of fuel for the Chinese economic powerhouse. Six of China’s top ten oil suppliers are in the Middle East, with Saudi Arabia occupying the top spot. Beijing’s relationship with the Arabs also revolves around its $1 trillion Belt and Road infrastructure (BRI) programme, launched in 2013. Through BRI, China aims to finance roads, ports and power stations in some of the world’s poorest areas.

As part of its push into the region, according to an article in the Financial Times about the Pentagon’s warning of China’s growing influence in the Middle East, Chinese companies have built ports in Israel, and invested in oil and petrochemical complexes in Saudi Arabia. Sinopec, the Chinese oil company, has several joint projects with Saudi state energy giant Saudi Aramco, including a large refinery in Yanbu.

The Suez Canal Economic Zone, launched by Egypt in 2015 to create an industrial and logistics hub around the Suez Canal, is another key Chinese investment. The canal is a vital shipping route connecting the Red Sea and the Mediterranean. Chinese companies are apparently also competing with the US to sell weapons to Middle Eastern countries.

A question that is likely to dominate the coming years is how long China will be allowed to flex its economic muscle in a Middle East still under a US security umbrella. Groans about China being a “freeloader” grew under former US President Barack Obama, who claimed in 2014 that China had been taking advantage of the security provided by the US in the region for thirty years. Disgruntled voices in the media also complained that China and other oil-consuming nations had benefited as Washington spent billions of dollars a year to police chokepoints like the Strait of Hormuz and other volatile parts of the Middle East to ensure that oil still flows around the globe.

These tensions are very likely to get worse in the post-coronavirus era bringing new dangers to the region’s 411 million people. If the behaviour of Saudi Crown Prince Mohammad Bin Salman is anything to go by, a Cold War between China and the US is more likely to empower Middle East autocrats. Last year, the prince visited China on a trip that was seen as an attempt to capitalise on the rift between Beijing and Washington. Riyadh’s trade deal with China that included weapons as well as 5G wireless communication technology and drones was viewed as a bargaining chip to be used against US attempts to push for a harsh response to the murder of journalist Jamal Khashoggi in 2018.

While there is every reason to suggest that America’s role in the Middle East has been nothing short of a disaster, a Cold War between two superpowers, one of which is currently holding two million Muslims in “re-education facilities” without any criticism from the Arab regimes, may not be good news. The Middle East needs good governance and an end to authoritarian rule, but there is little chance of that happening as long as a Cold War between China and the US plays out.

Nasim Ahmed is a writer, author, commentator on the Middle East and political Islam, based in London.