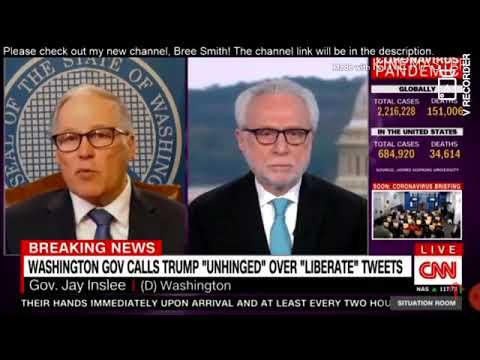 Ann Arbor (Informed Comment) – Trump’s tweets on Friday, “Liberate Michigan,” and “Liberate Minnesota,” and “Liberate Virginia” were clearly intended to incite his armed, conspiracy-minded, militant followers on the far right against those elected state governments, which intend to buck him on reopening the economy on May 1.

The possibility of Trump-inspired violence against Governor Gretchen Whitmer of Michigan and other state officials — and perhaps against any of us Michiganders who support her — cannot be ruled out. Trump is attempting to tarnish Whitmer in part because he sees her popularity as a threat to Trump’s prospects for taking the state in November, and in part because he fears she may be Joe Biden’s pick for vice president. He is being aided by astro-turfing paid for by a foundation with ties to the DeVos family fortune.

Gov. Jay Inslee of Washington state was blunt in his response:

“The president’s statements this morning encourage illegal and dangerous acts. He is putting millions of people in danger of contracting COVID-19. His unhinged rantings and calls for people to “liberate” states could also lead to violence. We’ve seen it before.

“The president is fomenting domestic rebellion and spreading lies even while his own administration says the virus is real and is deadly, and that we have a long way to go before restrictions can be lifted.”

Given the tensions in the country and the real possibility of violence, Trump’s tweets rise to the level of shouting “fire” in a crowded theater, and meet the Supreme Court threshold for a “clear and present danger” deriving from public speech, which allows that speech to be prosecuted. In fact, if Trump weren’t president and said these things, it is possible that the FBI would pay him a visit.

But let me underline what Gov. Inslee said. We have seen this before. It did not end well.

There once was a minor journalist who dealt in hate and grievance. Sort of the early twentieth century version of an NBC reality show star. He formed bands of far right wing dregs called the “Black Shirts.’ Richard Gunderman of Indiana University writes,

“Mussolini’s fascists formed squads of war veterans known as “Black Shirts,” who would clash with the members of other political parties . . . In 1922, tens of thousands of Black Shirts gathered in Rome to demand political change. The liberal government sought to declare martial law, but the king of Italy, Victor Emmanuel III, fearing civil war, instead asked Mussolini to form a new government. While the Fascists constituted only a small percentage of Prime Minister Mussolini’s original government, he pressured the legislature to grant him dictatorial powers over what citizens could do and not do, seeking to meld the state with the Fascist party.”

“The defining characteristic of fascism as a movement under Mussolini was the marriage of an electoral party and a private militia. Benito Mussolini was the leader, the Duce, of the post-World War I movement that gave fascism its name. As Mussolini gave speeches in the Italian parliament, his black shirts staged “punitive expeditions,” violent and often fatal attacks on the political opposition, and disrupted the functions of local governments. Mussolini wielded violence as the stick end of a carrot and stick strategy: If we don’t get our way we will beat you up.”

I have consistently argued that the analogy for Trump is with Mussolini.

There has all along been a danger, which became dramatically apparent at Charlottesville, that Trump’s fascist rhetoric would unleash violence by the far right. With millions out of work and a pandemic threatening us with a second wave of mass infections if we end social distancing too soon, the country is a powder keg. And we have a firebug for president.