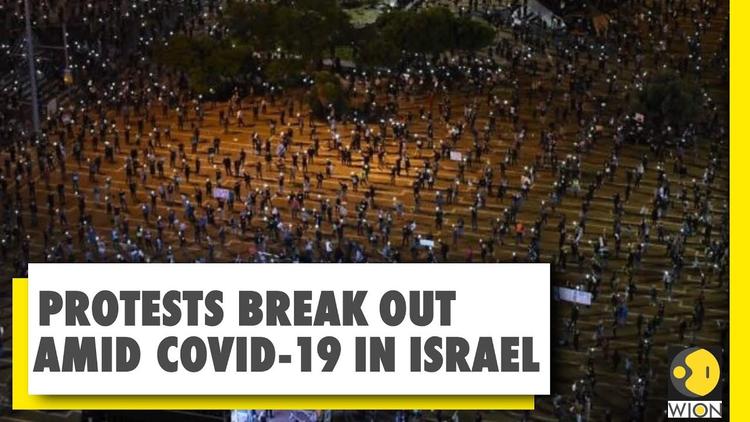 Ann Arbor (Informed Comment) – Some two thousand demonstrators gathered in formation in Rabin Square on Sunday in Tel Aviv for a “black flag” protest against the “destruction of democracy” by indicted prime minister Binyamin Netanyahu. They carefully kept six feet apart and wore surgical masks imprinted with the slogan “Crime Minister.” So reports Omar Rabie at i24 News.

There was heavy police presence, which stopped many demonstrators from reaching the square, to ensure that it did not become so crowded that social distancing became impossible. They also had instructed the rally organizers that they would have to provide surgical masks to everyone at their own expense.

They slammed the current negotiations between Netanyahu and his chief rival, Benny Gantz, who has defected from his own Blue and White coalition, to establish a government of national unity. They asserted that this step would deeply harm Israeli democracy. They held up placards saying, “We’re saving the state,” “We’re fighting corruption,” and “Dictatorship.”

Lapid blasted Netanyahu for trying to make “democracy” synonymous with “Leftism.” According to Josh Breiner at Haaretz, He said, “this is how democracies die in the 21st century . . . from the inside.” And he slammed his former colleague, Benny Gantz, as a traitor to the Blue and White bloc for being willing to join Netanyahu’s government. Yaaalon called on Gantz to repent of trying to join a corrupt government and warned he could become implicated in corruption himself.

Speakers warned that Netanyahu is taking Israel in a direction similar to that of Tayyip Erdogan’s Turkey.

Basic backgrounder on why people are risking their health & protesting in #Israel : Gov. emergency declarations during coronavirus to track civilians, and Netanyahu's attempt to appoint police chief as he faces indictments of fraud & corruption https://t.co/Qsb2QGkfSG

According to Haaretz, Yaalon said, “”Fighting on the field are devoted medical teams in hospitals and clinics, social workers and yes, among them many Arabs, who are saving us despite our failed leadership.” In Israel it is common to refer to Israelis of Palestinian heritage, about 20 percent of the population, as “Arabs.” It is not common to acknowledge the key role of Palestinian-Israelis in providing key health and other services during the coronavirus lockdown, and Yaalon’s statement is remarkable. Netanyahu can’t mention the ha-Aravim or “Arabs” without also saying “terrorist” or some other pejorative. Yisrael Beitenu leader Avigdor Lieberman wants to expel the 1.5 million Palestinian-Israelis from the country.

But Joshua Mitnick of The Christian Science Monitor reports,

“According to official government data published in the daily Haaretz newspaper, Arabs make up 17% of the country’s doctors, 24% of the nurses, and 48% of the pharmacists.”

Mitnick quotes an the deputy director of Israel’s largest hospital as saying that the system would collapse without the key contributions of the Palestinian-Israeli staff.

Odeh, the Palestinian-Israeli leader of the Joint List, which has 15 seats in the 120-seat Knesset, also underlined the contribution of his people to Israel at this time, according to Haaretz:

“”Given our shared fate, we are fighting the cruel coronavirus epidemic – Arab and Jewish doctors, caretakers and pharmacists. We will continue fighting and we will beat it. This shared fate is meant to continue through all the issues that are dear to us: Peace, democracy, equality and social justice. . .It’s not easy for me to stand among some of the speakers here tonight, but we need to see the main point – only through a joint Jewish-Arab struggle can we succeed . . . This crisis presents a huge opportunity for a wide Jewish-Arab front for peace and democracy.”

If Gantz had been willing to accept even the tacit support of the Joint List, he could be prime minister right now. But the racist rules of the political game in Israel, as was the case in Apartheid South Africa or the Jim Crow South in the US, forbid a coalition by the dominant race with a despised minority. Gantz knew that Netanyahu and the Right would demonize him as having compromised Israeli security by accepting Odeh’s backing for a minority government. Moreover, Gantz is on board with Netanyahu’s plans to annex West Bank Palestinian territory illegally, and he could not have followed through if he depended on the Joint List for his parliamentary majority. Gantz, a former general, turns out to have been a yellow-bellied coward, which his former colleagues now recognized.