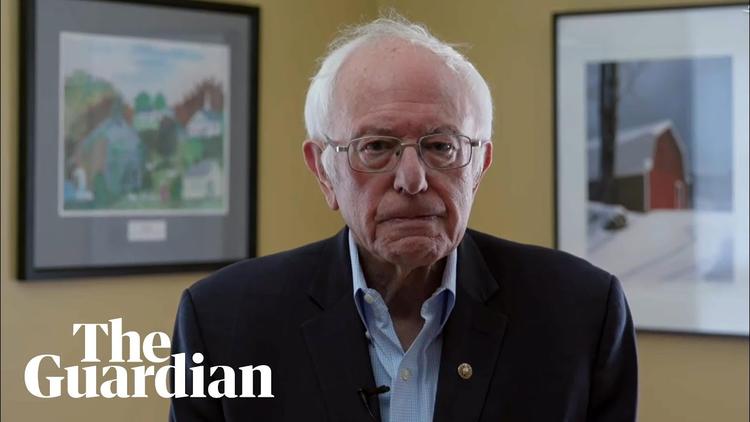 Ann Arbor (Informed Comment) – Bernie Sanders bowed out of the race for president on Wednesday, but he made it clear that he still leads a national movement. Sanders has a substantial delegate count, of 914 as I write. Although he has concluded that he won’t reach the 1,991 needed to win the nomination, his name will remain on the ballot during the remaining primaries, to be held after the national quarantine ends. His delegate count could still grown, therefore, and this would be a good thing. He would not be tearing down Joe Biden, the clear nominee, and giving the Trump campaign talking points. But he would be keeping his movement within the party going.

Joe Biden, with regard to positions and entanglements, is not very different from Hillary Clinton, and we know that Trump defeated her by running to her left. He will do the same to Biden, and given Biden’s ties to Wall Street, Big Oil, and the pharmaceutical industry, he will have some powerful ammunition. (Trump is tied to the same forces, but lies about it particularly effectively). Biden is not as easy a mark as H. Clinton, though, since he polls well with the white working class and African-Americans are much more enthusiastic about him than they were about her.

In his dissertation, political scientist Lee Payne looked at party platforms over 25 years and https://books.google.com/books?id=NLXMCgAAQBAJ&pg=PT449&dq=Lee+Payne+party+platforms+80+Percent&hl=en&newbks=1&newbks_redir=0&sa=X&ved=2ahUKEwi2yv_7r9roAhVPBs0KHaJtD0IQ6AEwAHoECAUQAg#v=onepage&q=Lee%20Payne%20party%20platforms%2080%20Percent&f=false”>found that their commitments were fulfilled 80 percent of the time.

Bernie Sanders on Medicare for All .

Create a Medicare for All, single-payer, national health insurance program to provide everyone in America with comprehensive health care coverage, free at the point of service.
No networks, no premiums, no deductibles, no copays, no surprise bills. Today, more than 30 million Americans still don’t have health insurance and even more are underinsured. Even for those with insurance, costs are so high that medical bills are the number one cause of bankruptcy in the United States.”

Sanders’ mission has gotten some unforeseen help from the novel coronavirus. As of March 29, there was an 11-point jump in support for single-payer health insurance, that is, for medicare for all. A solid majority of 55 percent of Americans now support it. Support had been that high at the beginning and middle of 2019, but the pro-Big Pharma ads had eroded support until late last month.

One reason for the change is that the current health insurance system ties health care to employment for the most part. For the unemployed, in Republican-ruled states, the state typically has refused to top up the Federal funds for the Affordable Health Care Act or ACA, making it expensive. This step was a way for GOP governors and state houses to sabotage the program.

His campaign says the goals are

“Reaching 100 percent renewable energy for electricity and transportation by no later than 2030 and complete decarbonization of the economy by 2050 at latest. Commit to reducing emissions throughout the world, including providing $200 billion to the Green Climate Fund, rejoining the Paris Agreement, and reasserting the United States’ leadership in the global fight against climate change.”

Biden and the corporate Democrats won’t fold easily, but green transportation and electricity are coming anyway. They may as well get aboard. And, the fossil fuel industry looks pretty anemic now that oil prices are halved and half of the coal plants in the world are running at a loss.

Sanders’ tax on extreme wealth (net worth over $32 million), which won’t apply to anyone with less than that.

“In order to reduce the outrageous level of inequality that exists in America today and to rebuild the disappearing middle class, we must establish an annual tax on the extreme wealth of the top 0.1%. Only applies to net worth of over $32 million and anyone who has a net worth of less than $32 million, would not see their taxes go up at all under this plan. Will raise an estimated $4.35 trillion over the next decade and cut the wealth of billionaires in half over 15 years, which would substantially break up the concentration of wealth and power of this small privileged class. Ensure that the wealthy are not able to evade the tax by implementing strong enforcement policies.”

The great thing about this idea is that it will be easy to depict Trump’s opposition to it as stemming from his own fear of paying his fair share of taxes. Sanders also sees it as structural, since it will reverse the gradual stranglehold that the billionaires have gotten over democracy.