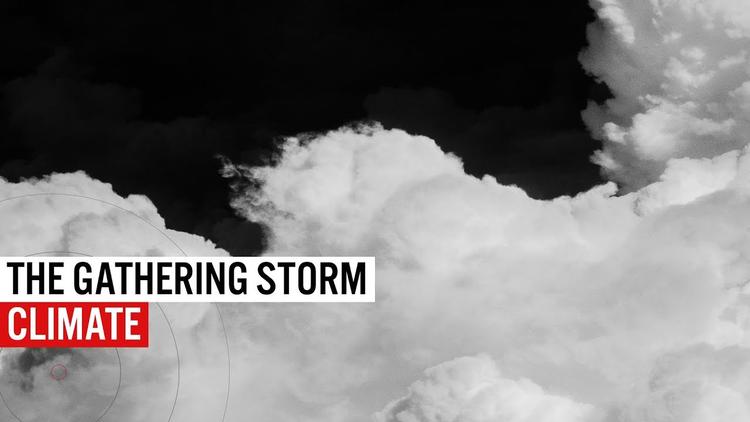 How might a single threat, even one deemed unlikely, spiral into an evolving global crisis which challenges the foundations of global security, economic stability and democratic governance, all in the matter of a few weeks?

My research on threats to national security, governance and geopolitics has focused on exactly this question, albeit with a focus on the disruptive potential of climate change, rather than a novel coronavirus. In recent work alongside intelligence and defence experts at the think-tank Center for Climate and Security, I analysed how future warming scenarios could disrupt security and governance worldwide throughout the 21st century. Our culminating report, A Security Threat Assessment of Global Climate Change, was launched in Washington just as the first coronavirus cases were spreading undetected across the US.

The analysis uses future scenarios to imagine how and where regions might be increasingly vulnerable to the resource, weather and economic shocks brought about by an increasingly destabilised climate. In it, we warn:

Even at scenarios of low warming, each region of the world will face severe risks to national and global security in the next three decades. Higher levels of warming will pose catastrophic, and likely irreversible, global security risks over the course of the 21st century.

Little did we know when writing these words and imagining the rapidly evolving shocks to come, that a very similar test of our global system was already brewing as governments sputtered to contain the damage of COVID-19.

Over the first few crucial weeks of this crisis, we’ve seen world leaders take a number of actions that indicate how climate shocks could destabilise the world order. With climate change disasters, as with infectious diseases, rapid response time and global coordination are of the essence. At this stage in the COVID-19 situation, there are three primary lessons for a climate-changing future: the immense challenge of global coordination during a crisis, the potential for authoritarian emergency responses, and the spiralling danger of compounding shocks.

First, while the COVID-19 crisis has engendered a massive public response, governments have been largely uncoordinated in their efforts to manage the virus’s spread. According to Oxford’s COVID-19 Government Response Tracker, countries vary widely in the stringency of their policies, with no two countries implementing a synchronised course of action.

While traditionally a great power like the US might step forward to direct a collective international response, instead the Trump administration has repeatedly chosen to blindside its allies with the introduction of new limitations on trade and movement of peoples. This mismanagement has led to each nation going on its own, despite the fact that working together would net greater gains for all. As the New York Times’s Mark Landler put it, the voices of world leaders are forming “less a choir than a cacophony”, leading to mixed global messages, undetected spread, and ongoing fights over limited resources.

In the face of climate change, such a lack of coordination could be be highly destabilising to world social and economic order. The mass displacement of people, the devaluation of assets, rising seas and natural disasters will call for shared practices and common decency in the face of continued tragedy. Many climate impacts will raise new questions the world has yet to answer. What do we do with nation-states that can no longer reside in their homeland? How do we compensate sectors for ceasing harmful practices such as fossil fuel extraction and deforestation, especially where national economies may depend on them?

We also face new global governance questions around the use of risky geoengineering technologies, which can be deployed unilaterally to alter local climates, but with the potential for vast unintended regional or even global consequences. These are challenges which, like climate change itself, can only be solved collectively through coordinated policies and clear communication. The sort of wayward responses and lack of leadership in response to COVID-19 would only lead to further destruction of livelihoods and order in the decades to come.

This historic moment is also offering new opportunities for leaders to further dangerous, illiberal agendas. Authoritarians have long used emergency situations as a pretext to further curtail individual rights and consolidate personal power against backdrops of real or imagined public danger. We’ve seen these actions spiral worldwide in the past month in autocracies and backsliding democracies, alike.

President Rodrigo Duterte in the Philippines has given security services the directive to open fire on protestors while Vladimir Putin is deploying mass surveillance technologies and new criminal penalties to monitor the Russian population. Hungary’s prime minister Viktor Orbán has forced new emergency powers through parliament that muzzle political opposition and allow for his indefinite rule. Even the supposed democratic bastions of the US and the UK are seeing worrying signs of autocratic policies, as surveillance drones are deployed to monitor citizens, scientific expertise is undermined, and open-ended emergency powers are granted to police forces for undetermined time frames.

A warming world will only result in more disaster-related events for power-hungry leaders to take advantage of in the years ahead. From the nationalisation of resources to the deployment of militaries in response to climate shocks, it can be all-too-easy for public safety needs to bleed into personal political opportunities. The second-order effects of climate change, from supply chain instability to the migration of peoples, will also provide authoritarian leaders more fodder for their ethno-nationalist ideologies, which inflame divisions in society and could help broaden their personal appeal. Without clear and sturdy limits on executive power, the disruptive impacts of climate change will be used to further chip away at democratic freedoms across the world.

Overlapping shocks are the new normal

Finally, this situation is teaching the globalised world new lessons on the devastating consequences of compounding shocks. Managing a deadly global pandemic is bad enough, even before you layer on the massive unemployment, trade disruptions and economic shutdown that its mitigation sets in motion.

The months ahead will bring about additional crises – some related to the pandemic, like a massive uptick in public debt used to bail out national economies. But other near-term shocks may themselves be climate change-induced, from new forecasts for large-scale floods this spring in the central US, to a prospective repeat of 2019’s severe summer heat waves across Europe.

These disasters have the potential to strike just at the time when people are being advised to shelter inside, many in at-risk areas and without adequate indoor cooling. Overlapping, historic shocks like this are becoming the new normal in our climate-changed era. As public disaster response budgets spiral and loss of life mounts each year, governments will continue to struggle to contain their compounding damage.

Scientists and security professionals alike have long warned about the devastating potential of climate change, alluding to how it might rattle our global governance systems to breaking point. But few could have expected that the fissures in our institutions would be revealed so soon, let alone on such a disturbingly large scale.

We can treat the current global crisis as a sort of “stress test” on these institutions, exposing their vulnerabilities but also providing the urgent impetus to build new resilience. In that light, we could successfully rebound from this moment with more solid global security and cooperation than we knew going into it. Decision-makers should take a hard look at their current responses, problem-solving methods, and institutional design with future climate forecasts like our Threat Assessment in mind.

We know that even steeper and more frequent global shocks are in store, particularly without serious climate change mitigation efforts. What we don’t yet know is whether we’ll repeat current patterns of mismanagement and abuse, or if we’ll chart a more proactive and resilient course through the risks that lie ahead.