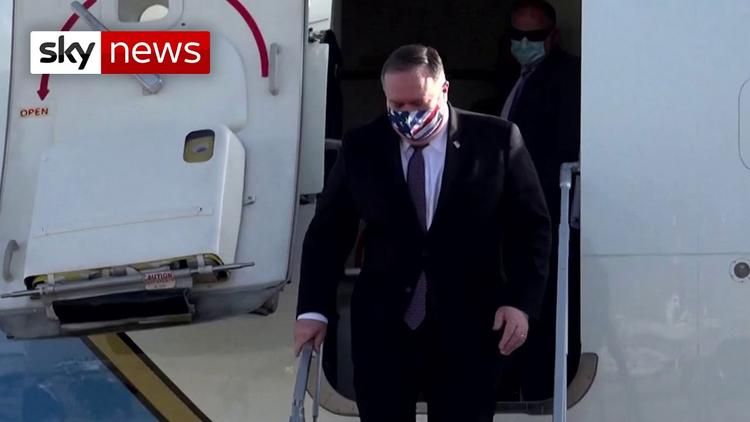 Ann Arbor (Informed Comment) – US Secretary of State Mike Pompeo dropped in on Israel on Wednesday to bestow his blessing on the new annexationist coalition government being formed by indicted prime minister Binyamin Netanyahu and his new partner, Gen. Benny Gantz of the Blue and White bloc.

Pompeo flew 24 hours to spend 6 hours on the ground, so it was important for him to be there.

Here are the main reasons for this bit of diplomacy on the model of “if it is Wednesday it must be Jerusalem.”

1. First, the Trump administration response to the coronavirus pandemic has been the worst public policy performance in living memory, and that includes Hoover’s mishandling of the onset of the Great Depression (he lost half of the country’s industrial production in the last three years of his presidency) and Johnson’s escalation of the Vietnam War. Polling shows that whereas 51 percent of Americans disapproved of Trump in April, 56 percent do now. Among registered voters, Biden beats trump 46% to 38%. And on the question of the coronavirus, 56% disapprove while only 43% approve. Trump has made a big deal of bashing the coronavirus response of Michigan governor Gretchen Whitmer, but Michiganders approve of her policies by 71% and only 39% of them like Trump’s. Only 36% of respondents said they trusted information about the pandemic coming from Trump.

2. News about a new government in Israel that will pursue annexation of Palestinian territory will be treated as good news among much of Trump’s base, so the photo op with the corrupt and greedy Netanyahu will warm the cockles of the hearts of white evangelicals yearning, as Pompeo does, for the Rapture. American evangelicals are to the Palestinians as, well, American evangelicals were to the American Indians. Some fundamentalist US Christians are even settlers in the West Bank themselves, hoping to help the Israeli squatters better steal Palestinian land, convinced that when Israel has all of “Judea and Samaria,” Christ will come back and there will no longer be any Jews. Sort of a Holocaust-of-the-Rapture.

3. Nobody wants the further annexation of Palestinian territory more than sleazy casino mogul Sheldon Adelson, a backer of both Netanyahu and of Trump. Trump needs Adelson’s billions for his fall campaign against Biden, and having his SecState bless the new annexationist government is a sign to Adelson that he is betting on the right horse. In contrast, most of the Democratic Party opposes further annexation on the grounds that it will make achieving a two-state solution “difficult.” (There is of course no longer any realistic prospect of a two-state solution.) The right wing of the Israel lobbies in the US will be happy about Pompeo’s trip and benediction, as well, though the American Jewish community itself is deeply divided on annexation and creeping Apartheid. J Street opposes them and most American Jews under 30 are done out with Netanyahu and his policies.

4. Trump and Pompeo, as American ultra-nationalists with a phobia about Chinese economic power, have viewed Chinese investments in Israel with alarm. Israel also has the keys to much American technology, which they can reverse-engineer from US weapons and other high technology, and there is a long-standing fear of leaks to China from Israel. A Hong Kong firm has a bid in to build a $1.5 billion desalinization plant in Israel, and Pompeo appears to be trying to stop it.

5. The trip is also an opportunity to rattle sabers at Iran from Israeli soil. The rise of Iranian influence in the eastern stretches of the Arab world has provided the opportunity for Washington to craft an alliance between Israel and Gulf countries like Saudi Arabia and the United Arab Emirates. Riyadh and Abu Dhabi have to worry at least a little bit about their public, most of whom oppose Israeli annexation of more Arab land. Pompeo’s message is to keep your eye on the Iranian troops and proxies in Iraq, Syria and Lebanon– they are the real threat, not the annexation of the Jordan Valley, Pompeo is saying.

6. Pompeo’s trip is also a shot across the bow of US allies in Europe and the Middle East, who are extremely upset by the prospective land-grab by Netanyahu of some 30% of the Palestinian West Bank. (Shall we call it the “Sudetenland Maneuver”?) The British foreign ministry has stated its opposition, and meetings are planned in Brussels on the matter. Some European countries are even speaking of sanctions. In the Middle East, Jordan and some of the Gulf countries, otherwise close to Washington, are livid.

Pompeo’s response to the allies? Get over yourselves. We’ve got a Rapture to manage here.