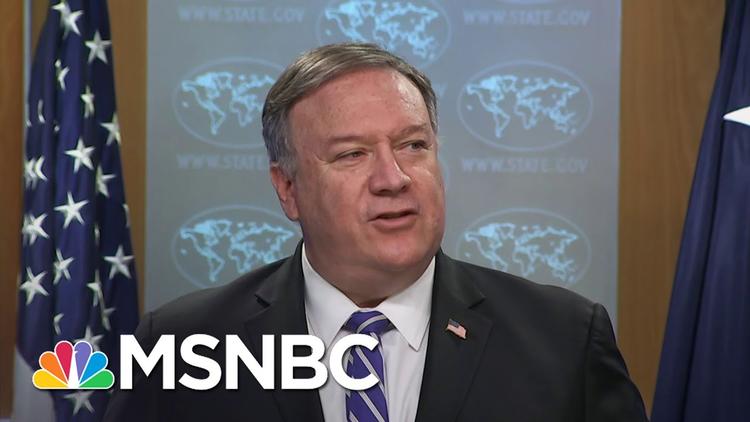 Ann Arbor (Informed Comment) – The mystery deepens. Late last Friday, Trump summarily fired the State Department Inspector General, Steve Linick. While in US law as it now stands, the president has the power to fire pretty much anyone in the executive, if he fired Linick as an act of retaliation for one of Linick’s investigations, that could be illegal. Trump wouldn’t himself have known who Linick was, but was asked to fire him by secretary of state Mike Pompeo.

The first leak about the firing alleged that Linick had been investigating Pompeo himself, for using State Department personnel as personal valets to pick up his dry cleaning and walk his dog. It is forbidden in the US government to have staffers do chores that are outside their position description, and former Pentagon spokeswoman Dana White was slammed by that department’s Inspector General for this sort of thing. Even military men have gotten into trouble for this sort of thing.

Pompeo denied that he had a vendetta against Linick for investigating him, claiming that he had not know about it. I’ll leave it to you to decide if that seems plausible.

Pompeo went on to undermine himself by admitting, “I went to the president and made clear to him that Inspector General Linick wasn’t performing a function in a way that we had tried to get him to…”

Like Trump himself, I don’t think Pompeo has a firm grasp of the function of an inspector general. I don’t think inspectors are supposed to do things the way the head of the department they are investigating wants them to.

But then on Monday, Rep. Eliot Engel alleged that the firing might have had to do with Linick’s investigation into the Trump administration’s sale of weapons to Saudi Arabia and the United Arab Emirates. Just a year ago, Pompeo declared a phony “emergency” to allow the executive to sell $8 bn. in weapons to Riyadh and Abu Dhabi without going through Congress.

I wrote on this issue,

“Dan De Luce at NBC News reports on a bipartisan attempt in Congress to block Trump’s sidelining of the legislature in fast-tracking an $8 bn arms sale to Saudi Arabia that includes components useful in building ballistic missiles. Secretary of State Mike Pompeo justified the step on the grounds of a security threat from Iran. (Iran has not aggressively invaded another country in modern history; Saudi Arabia launched an ongoing war on Yemen in 2015).

The Constitution gives Congress control of the purse strings, and a provision of the Foreign Assistance Act allows Congress to request a report on the human rights record of the recipient country. The move to restore congressional oversight is being led by Sens. Todd Young (R-Ind.) and Chris Murphy (D-Conn.) Sen. Bob Menendez (D-NJ), the minority leader of the Senate Select Committee on Foreign Affairs, is also a leader of the movement. Obviously, Congressional Democrats will overwhelmingly vote for the measure, but the question is how many Republicans will break ranks with the administration. Sen. Lindsay Graham (R-SC) has joined the effort, but that may simply suggest it is a quixotic enterprise, since the senator is notoriously erratic.

Congress is angry about the brutal murder of Saudi dissident journalist Jamal Khashoggi at the Saudi consulate in Istanbul in October of 2018, about which Trump has declined to produce the necessary report. There have also long been pro-Israel members of Congress who are nervous about helping the Kingdom to build sophisticated weapons systems. A third consideration is disgust at the Yemen War. Sen. Bernie Sanders was among the leaders of a move to legislate the end of US technical support for that ruinous war, a move which won in both Houses but which was vetoed by Trump without there being the votes for an override.”

Congress has never been able to overrule Trump on foreign policy because it needs two-thirds in the senate to override his veto, and is not able to get more than 55.

The Inspector General, however, can investigate these sorts of decisions. The Trump administration’s Yemen policy has been despicable, putting millions of innocent civilians at risk. The pretext, that the rebel Houthi movement of militant Zaydi Shiites in north Yemen is a cat’s paw of Iran, is deeply flawed. The Houthis are a local movement resentful of creeping Saudi Wahhabi influence, and Zaydism is not like the Shiism practiced in Iran and Iraq (Yemen does not have ayatollahs). They attracted some relatively minor Iranian support, but most of their weapons are American, transferred to them by elements of the Yemeni military loyal to the late former president Ali Abdullah Saleh, who initially allied with them.

The Saudis and the United Arab Emirates have spent billions bombing Yemen, with about a third of their bombs landing on civilian structures and facilities. Iran maybe sent a few million dollars to the Houthis.

The main conflict in any case is no longer between the Houthis and the nationalists, but between southern Sunni secessionists and the Sunni Muslim Brotherhood (the Islah Party), with the Emirates backing the southerners and the Saudis allied with al-Islah.

The Saudis declared a cease-fire with the Houthis in March on the pretext that the coronavirus made fighting dangerous for all parties at this point. With oil prices cratering, the Saudis may not be able to afford to go on wasting munitions (dropping bombs from 30,000 feet has never in modern history taken territory or defeated a guerrilla army).

In any case, there was no emergency with Iran last May that would have justified the Trump administration unconstitutionally usurping the Congress’s power of the purse. What, was there a shortage of pistachios?

Moreover, on October 2, 2018, the Saudi authorities had murdered Washington Post columnist Jamal Khashoggi in their Istanbul consulate, raising the question of whether you really want to be selling them $8 billion in high tech weaponry. Congress might not have thought so, which is why Pompeo went around them with his “emergency.”

If Linick was fired because of the Saudi investigation, it may have been a further step taken by the Trump gang to protect Riyadh from the consequences of the Khashoggi murder. Ironically, it has been alleged that Khashoggi himself may have been killed because he was a vocal critic of Trump, and the Saudis were afraid his being a Saudi and playing that role would interfere with good relations with the White House. Linick’s removal may have been the mirror image of Khashoggi’s murder. Linick is only lucky that typically in Washington they don’t yet use bone saws for these purposes.