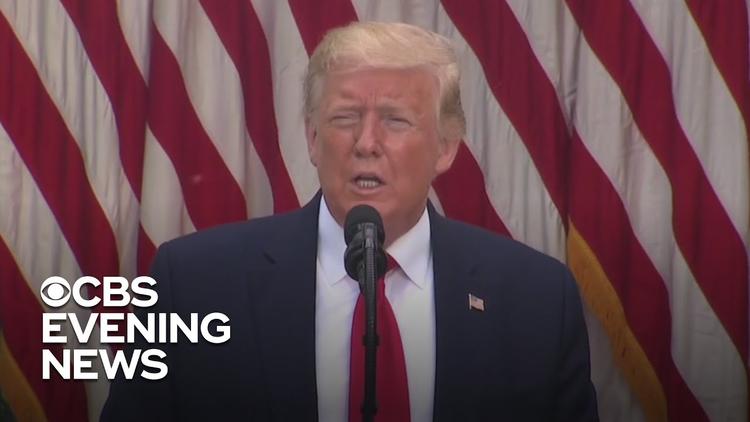 ( Waging Nonviolence) – When I compared the president and his followers to Jim Jones and the “Peoples Temple” cult two years ago I didn’t expect many would go that far. In fact, I hoped events would prove me wrong. Unfortunately, the comparison has become inescapable, and other writers have made the same observation. “Donald Trump is the Jim Jones of American presidents,” writes Chauncey DeVega.

Trump’s recent recommendation that people inject themselves with disinfectant, for example, was, as many recognized, sheer madness. But behind that madness is a diabolical method. As one doctor warned, “That’s how people kill themselves.” Another doctor, psychotherapist John Gartner, who contributed to the bestselling book “The Dangerous Case of Donald Trump,” flatly says, “Our president’s mental pathologies inexorably compel him to hurt and kill large numbers of people — including his own supporters.” The deaths caused by his inactivity (and fantastic lies) in the face of the pandemic are not simply collateral damage from Trump’s policies, Gartner claims, but “the logical outcome of his apparent mental pathologies.”

What are we going to do about this?

Cults need a “charismatic” leader. They need followers ready to swallow fantastical beliefs and who — if it’s a suicide cult — resonate with the perverse appeal of evil. At the same time, however, they also need something else if they are to become more than a quaint fringe: They need a culture in which people generally tend to lose sight of the sanctity of life. Psychopathic “leaders” will no doubt arise from time to time, as will some disillusioned followers, but in a healthy culture in which people can develop a robust sense of the meaning of life those seeds won’t take root. They will get no traction, its adherents dangerous only to themselves (unless they take to violence). And it’s here, at that cultural level, that we get some leverage to keep the phenomenon under control, and hopefully see the end of it.

Half a century ago, on April 4, 1967, Martin Luther King warned in his famous Riverside Church speech that, “A nation that continues year after year to spend more money on military defense than on programs of social uplift is approaching spiritual death.” Since then, what have we seen?

We failed to heed King’s warning about “spiritual death,” and it went on to become all too real.

And yet, while the forces of death are hard at work taking advantage of the pandemic to further eviscerate our democracy, we see those acts of human courage and resilience that so often appear — much to everyone’s surprise — in a crisis: neighbors checking on neighbors, bringing them food; the incredible courage of the frontline workers and essential service men and women, not to mention 22,000 mostly young people volunteering to help in vaccine testing at great risk to themselves; an Italian priest laying down his life for a younger person, and many more. We’re also seeing models of resilience that can serve as seeds of a new future, like the small communities and the people engaged in baking or farming — what Gandhi called “bread labor,” barter economies. The village where I live in Northern California had already organized a radio network for use in the fires and other catastrophes of climate change. Now the network is extended to account for every person in the community who may need help. I bring produce from our garden to the now very busy food bank every Thursday, and many who have the skill are making masks.

This is human nature. But it’s not our current culture. I grew up with “Lord of the Flies,” for example — a fictional, highly demoralizing story about supposedly innate human savagery. So did my children, for whom it was required reading in school. It became a best-seller and of course an equally successful film. Well, last week the Guardian reported that an event much like the frame story of the novel actually happened — only the outcome bore no resemblance to the disastrous novel. In 1965 six Australian teens, desperate to escape the boredom of school, “borrowed” a small boat and set out for a nearby island, only to be caught in a storm and stranded on an uninhabited island for 15 months. Realizing they were likely to be stuck for a while, the first thing they did on making land was to set rules for “time outs” if it looked like a conflict was brewing. They governed themselves peacefully and democratically for the 15 months. Not the stuff of an “exciting” movie; but the stuff of life.

Human nature can be suppressed, which for some reason we are avidly doing with our popular (and now political) culture, but it can never be eliminated. Something in us will always want life over death, no matter how loud the cultural echo chamber for violence. And that hopeful element in us can be mobilized as a political force. A student leader of the successful Serbian Otpor! uprising of 2000, Srƌa Popović, explained how they won, saying: “They were on the side of death, we were on the side of life.”

And now as it happens the morbid cultural echo chamber is beginning to sound hoarse. Rutger Bregman, who wrote the book on the real lord of the flies, writes, “For centuries western culture has been permeated by the idea that humans are selfish creatures. That cynical image of humanity has been proclaimed in films and novels, history books and scientific research. But in the last 20 years, something extraordinary has happened. Scientists from all over the world have switched to a more hopeful view of mankind. This development is still so young that researchers in different fields often don’t even know about each other.”

We can get behind that change, and build a revolution. And we can do this by resolutely choosing life over death wherever possible. If you’re teaching a biology class, don’t teach your students to “pith” (aka kill) a frog to study its inner organs — computer modeling is just fine. Think about maybe going vegetarian. Pull back from the popular media’s demoralizing message. Be careful about our language. I winced when a friend said to me recently that a local restaurant has “a salmon to die for.” Setting aside the fact that we might want to let the poor salmon go on living, we can resensitize ourselves to these casual comments that unconsciously reinforce the distorted priorities of which suicide cults are an extreme expression. In these small ways we can reawaken others also to the beauty of life, and that will build up to the policy changes that reflect that sensitivity: converting criminal justice to restorative justice, phasing in the many nonviolent substitutes for war, and so on.

We can also study nonviolence. In fact, we must. Even as we struggle with the pandemic we must get ready for a fiercer struggle, against the agendas of those who have already begun using the pandemic as a “shock doctrine” to carry forward the destruction of our most cherished democratic institutions. Consciously or not, they are stoking the obsession with death to support that baneful agenda. As the president recently said, the sight of healthcare workers rushing to their death is “a beautiful thing.” A nation approaches spiritual death when war becomes an obsession, the only metaphor for every challenge. Physical death is just that, and right now it’s brought to you by Clorox, hydroxychloroquine, etc. (Gartner forgot to mention that death cult leaders compass their own death with almost equal alacrity). And political death is dictatorship, because the fundamental principle behind democracy, after all, is the sanctity of every person, every life. Our resistance will draw upon that very principle.

At the same time, rhetoric like “we were on the side of life, they were on the side of death” is not advisable. It will only sting the opposition to further fury, deeper divisiveness. The statement we make with our words and actions can be subtler, and all the more effective. We can uplift the sanctity of life by cherishing diversity in nature and humanity. As Gandhi said, “Even differences prove helpful, where there are tolerance, charity, and truth.” We can play down the importance of money and materialism, show empathy even with those standing in opposition, and above all back the science and other aspects of the paradigm shift that Bregman mentions.

A cultural mindset operates below the surface, which is why it has taken so long to recognize that our pop culture is a dominant force behind the political and associated disasters we’re now facing. This does not mean, however, that we cannot be intentional about changing it. A culture’s prevailing story, or mindset, is based on the individual mindsets of people, including influential people who can bring many others with them. A society’s political choices are based, roughly speaking, on its individual ones. And we will not be operating in a vacuum here. “The fact that mankind persists,” Gandhi pointed out, “shows that the cohesive force is greater than the disruptive force.” Each of us has our own sphere of influence in which we can make this critical choice of cohesiveness over disruption, life over death. Therefore choose life.

Michael Nagler is Professor emeritus of Classics and Comparative Literature at UC, Berkeley, where he co-founded the Peace and Conflict Studies Program. He is also the founder of the Metta Center for Nonviolence and author of the award-winning Search for a Nonviolent Future. His latest book is “The Third Harmony: Nonviolence & the New Story of Human Nature.”