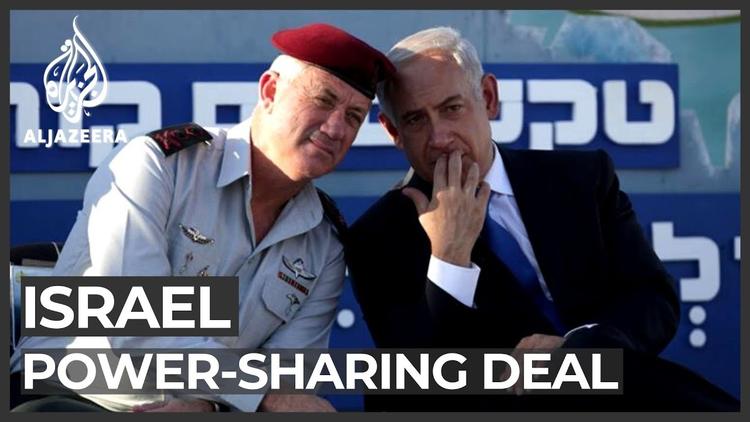 Ann Arbor (Informed Comment) – Israel’s leaders have finally formed a government, after three elections that left the country in a political quagmire.

The new government is a catastrophe in the following ways:

1. It will encourage Likud leader Binyamin Netanyahu to continue to dismantle Israeli democracy. He will seek to have the corruption charges against him set aside. He has already damaged the probity of the Israeli press.

2. Netanyahu will be emboldened in his plan to annex some 30 percent of the Palestinian West Bank. This step will be the nail in the coffin of the long-moribund 2-state solution.

That step will cause tensions, perhaps violent tensions, with the 5 million Palestinians living without basic human rights under Israeli Occupation.

It will also cause major problems in neighboring Jordan, a majority of whose population consists of descendants of Palestinians expelled from their homes by the Israelis. The usually cautious King Abdullah II of Jordan warned of “massive conflict” were Netanyahu to follow through. At the least, it seems likely that annexation would force the king to annul the 1993 peace treaty between the two countries. Part of that peace treaty involves substantial security cooperation between Jordan and Israel, which could also end. It seems to me that the king is worried about such extensive discontent in his small country that his own throne might be endangered.

3. It will sideline the 20% of Israelis who are of Palestinian heritage and who have 15 seats in the 120-member Knesset or Israeli parliament. They had been on the brink of being admitted to the Israeli political game, but now will be completely marginalized.

The US corporate press won’t tell you this, but the reason for the inability to form a government was Israeli racism. Jewish parties in Israel with any respectable number of seats in the Knesset or parliament are either right wing (Blue and White) or far right (Likud and its allies). The right wing for the past 14 months had refused to accept a government with far-right Netanyahu in it. Governments could have been formed without Netanyahu’s extremist Likud Party, which was modeled on the mass parties of the 1930s in Europe. They would have needed to be willing, however, to at least tacitly accept the support of the Joint List, a predominantly Palestinian-Israeli coalition.

I wrote earlier this spring:

In Israel’s most recent election, the largely Palestinian-Israeli Joint List, led by Ayman Odeh, won an unprecedented 15 seats in the 120-member Israeli Knesset or parliament. The virulent racism against them of the Israeli Right has gradually convinced more of them to vote in Israeli elections, despite being second-class citizens. If they all came out to vote, they could potentially get as many as 24 seats. Odeh’s charismatic and vigorous leadership has led them to their current political relevance.

After the recent election, Odeh tweeted at caretaker prime minister Netanyahu, who dismissed Palestinian-Israelis as “terrorists,”

All of a sudden, Odeh looks prescient.

The far right Likud and its coalition parties gained 58 seats in the recent election, but Likud by itself only won 36 seats. A coalition needs 61 to form a government.

The Center-Right Blue and White won 33 seats. But the center-left Labor-Meretz coalition has another 7, taking a possible alliance to 40.

The … wild card was the Joint List, with its 15 seats. No one in Israeli politics even considered allowing it to join as a formal coalition partner and be given cabinet seats. I pointed out after the recent election that one way to break the deadlock “would be for Blue and White to bring the Joint List into the government and give the Palestinian-Israelis a couple of innocuous cabinet seats. Israeli racialist supremacism, however, makes it impossible for any Jewish political party to cross that color line. This is true even though Palestinian-Israelis (what are called in the Israeli press “Israeli Arabs” or the “Arabs of 1948”) comprise over 20 percent of the population of Israel. It would be like asking white politicians in Mississippi in 1950 to bring African-Americans in the governor’s cabinet. Or it would be like asking the Apartheid government of South Africa in the same era to enfranchise Black Africans, whom they viewed as terrorists.”

And that, dear reader, is still the case after Gantz did his deal with Netanyahu.