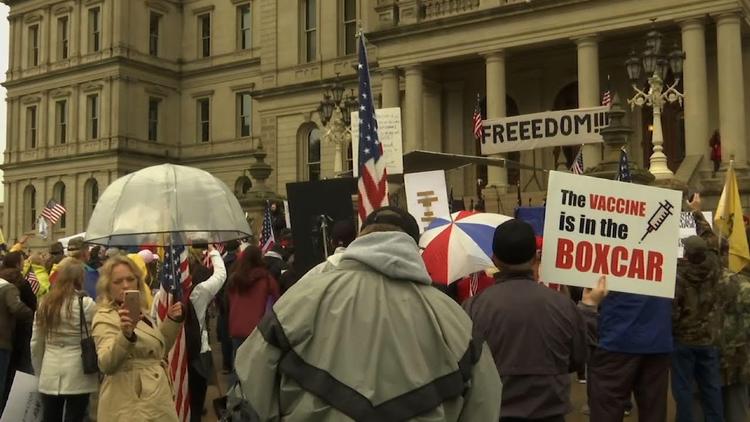 Ann Arbor (Informed Comment) – Roughly 1,264,000 US soldiers have died in all the wars this country has ever fought.

A new simulation by the University of Pennsylvania’s Wharton School predicts that if all the states completely reopened today and all Americans ceased all social distancing measures, a million people would die in this country by June 30. That is, almost as many would die in the next two months as soldiers died in all of US wars in all of US history.

That is the outcome being demanded by the “reopen” protesters who menaced Michigan’s state capitol with confederate flags, Nazi paraphernalia, and assault weapons. They are a tiny group and should not be given too much attention, especially since some of the protests are astroturfed by the super wealthy, such as the DeVos’s in Michigan. Gov. Gretchen Whitmer denounced the racism and Nazism.

What she should really have denounced is the willful ignorance.

Wharton says that even if we just keep things the way they are, with most states at least partially closed and individuals practicing social distancing, we would still lose 116,000 by June 30.

The reason a complete and immediate reopening would kill so many is that Americans don’t have immunity to the novel coronavirus and it is extremely contagious. At a transmission rate (or RO) of 3, I figured everybody in the country could get it in a month if no mitigation was done.

If you just let it run wild you’d get 24 million cases in the next two months, and a million deaths. Note that the mortality rate would go way up if you let it run wild because there would be no intensive care units for many of those who needed them and they would just die at home or stacked up on gurneys at the hospital waiting for some oxygen.

Wharton also shows that if we let the one million grandmas and grandpas die (most deaths come in people over 60 like me), the hit to the economy would be much less than if we continued mitigation.

The Wharton model is right about some things. For instance, if we are already at 70,000 deaths (an undercount because of people who die at home undiagnosed or who are wrongly classed as having died of pneumonia) in early May, we are certainly going to have more than 116,000 dead by August, which a previous model had suggested.

Why the United States is the biggest coronavirus catastrophe in the world is a little bit of a mystery.

Ohio Governor Mike DeWine rescinded a requirement that all Ohioans wear a face mask when they go out, after he got tremendous feedback from, he said, people who didn’t want the government telling them what to do.

Ohioans are apparently not as smart as people in Hong Kong, who have a not very good government that was not very pro-active about the coronavirus threat, and who just volunteered as a population to wear face masks. Hong Kong was a potential pandemic hot spot, being relatively densely populated.

University of North Carolina social scientist Zeynep Tufekci points to universal mask-wearing in Hong Kong as one of the reasons for its low death rate:

Hong Kong had every reason to have an exponential epidemic (lots of travel from Wuhan/China) and yet has dramatically slowed the spread. Two deaths total. Probably: with memory of SARS, they responded quickly with closures, universal mask wearing, social distancing and hygiene. https://t.co/0Zv5DJQ2R2

The white supremacists and nut jobs who menaced elected state officials with their military-style assault weapons could have what they want, a substantially open economy, but with some conditions.

They’d have to be willing to wear face masks (and not the big white kind with the pointy top).

Then, we’d need to be testing on a very large scale across the country daily, and then we would need, nationally, 100,000 contact tracers. Once people positive for the virus or for antibodies against it have been identified, they would be interviewed about all the people they might have spread it to in the past couple of weeks, and those people would be contacted and asked to quarantine.

As Zeeshan Aleem at Vox writes, South Korea did it this way, with less than 300 deaths and little shutdown of the economy (it did close schools and some public facilities).

But guess what? The far right and just the ordinary right wing, and maybe a lot of the independents have been propagandized for decades that government is bad and can never do anything efficiently and should be starved of funds and reduced to a pitiful, tiny little thing so that big corporations and the super-wealthy don’t have to pay their fair share of taxes for public services.

And to deal with the coronavirus successfully while keeping the economy open, you need one thing.

And that is one of the things wrong with the Wharton School model– it doesn’t have the third option, of large-scale testing and contact tracing. As it is, its model is a zero sum game where more shutdown and social distancing produces fewer deaths and more economic misery, whereas opening up immediately produces many more deaths but less of a hit to GDP.

There is another possibility that spares both lives and the economy.

Unfortunately, it would require a competent set of national leaders to implement it, and we instead have someone in the White House who is perfectly willing to sacrifice a million Americans at the altar of the supreme Dow Jones.